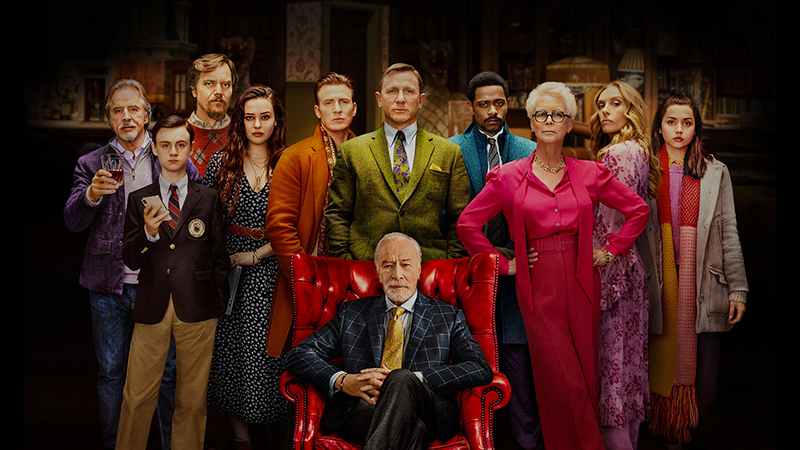 How did another seemingly same-old whodunit receive rave reviews, rake in $300 million at the box office, and defy all expectations? While the answer to that could be another mystery, it might have something to do with its stellar star-studded cast and impeccable script. Knives Out is the fun, twisty murder mystery you need right now.

Knives Out features an ensemble cast including Jamie Lee Curtis, Daniel Craig, Chris Evans, Toni Collette, Michael Shannon, Christopher Plummer, Don Johnson, and Lakeith Stanfield. The Drysdale Family’s lavish lifestyles come to a halt when the patriarch, Harlan (Plummer), is found dead. Originally ruled a suicide, each family member is now a suspect since just about everyone has been dipping their hands into Harlan’s money. Detectives have to start from ground zero to solve this, and fabled private investigator Benoit Blanc (Craig) has also been hired to help, though no one knows why or how.

Was it Linda (Curtis), the successful real estate mogul? Joni (Collette), the lifestyle guru? Ransom (Evans), the spoiled playboy? Walt (Shannon), the publisher riding on his dad’s coattails? Anyone is fair game here, especially when it becomes clear just how strained Harlan’s familial relationships were.

The vast array of A-Listers here all pulled their weight without anyone truly outshining another, an impressive feat. However, if any single performer stands out, it would be newcomer Ana de Armas, who previously starred in War Dogs, Blade Runner 2049, and a wealth of Spanish films before her breakout here. As Harlan’s trusted nurse and caretaker, de Armas earned a well-deserved Best Actress nomination at the Golden Globes.

Perhaps we should credit Rian Johnson for his spectacular, Oscar-nominated script, which took him seven months to write. The story is of course filled with twists and turns, but in they emerge in the best, least cheesy ways possible. The jokes all land, the acting is uniformly strong, and the ending is beyond satisfying. It’s a movie I was so engulfed in, I lost all sense of reality, not even thinking to check my phone or wondering how much was left to watch. With my shrinking attention span these days, that’s pretty impressive.

It’s not often that audiences are treated to such a successful original film, not based on, inspired by, or adapted from anything. A sequel is already in the works, so now’s your chance to get ahead while you can. Knives Out is not to be missed.

Knives Out is now available to rent for a one-time purchase of $5.99.

Other new movies now Available:
Frozen 2
El Coyote
Nesting Dolls
Rag Doll
Homeward
The Extraordinary Journey of the Fakir
The Light of Hope
We Only Knows So Much