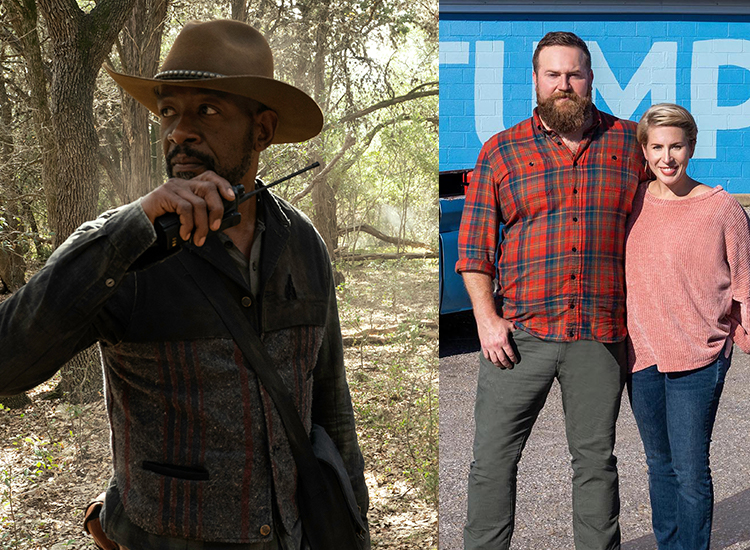 To celebrate our newest offer—$10 for your first month of Sling Orange or Blue, or $25 for both—here’s a look at 10 of the best shows and live events you can catch on Sling in April and May. This is just a small sampling of the news, sports, movies, and other content you can find live and on demand with Sling; use the link at the bottom of the page to sign up for Sling Orange + Blue for just $25 for your first month.

Between one of the best quarterback classes in recent memory, a rash of trades near the top of the board, and the novel thrill of having IRL fans in attendance—newly emboldened Cleveland Browns fans, no less—this year’s NFL draft has the potential to be one of the most exciting ever. Check out our full draft preview here and be sure to tune into all three days (and all three broadcasts) of the 2021 NFL Draft on Sling. - Mark Schiff

The second half of season 6 of Fear the Walking Dead premiered earlier this month, and The Walking Dead spin-off continues to find new life in its saga of survival. The most recent episode felt shocking in the same way TWD has at its best moments, and the focus on fan favorite Morgan Jones (Lennie James) has made recent seasons an important piece in the larger Walking Dead universe that’s slowly coming into focus. Fans of the show can add AMC+ to their Sling accounts and watch new episodes on Thursday instead of Sunday. - MS

Available on: Sling Orange and Blue with AMC or early with AMC+

Revealed: The Hunt For Bin Laden

Sunday, May 2 on HISTORY

2021 marks two important milestones in America’s history: The 20th anniversary of 9/11 in September and the 10-year anniversary of Osama Bin Laden’s assination in May. HISTORY will be commemorating both events, first with a new two-hour documentary on the Bin Laden raid that will provide “a sweeping account of the story, linking policy, intelligence and military decision-making as they converged on a mysterious compound in Abbottabad, Pakistan” and includes interviews with President Obama, Secretary Hillary Clinton, and other high-ranking officials, along with “key, though unnamed, intelligence officers” and “the military planners, SEAL operators and army pilots selected to carry out the raid.” HISTORY is also planning a series of 9/11 documentaries that will air on Sept. 10 and 11. - MS

Available on: Sling Orange and Blue with HISTORY

New Episodes Premiere May 2 at 10pm ET on Paramount

It’s hard to remember what the inside of a pub looks like after a year of limited indoor drinking options due to COVID-19. As vaccines roll out and people become more comfortable bellying up to the bar to order a round or three, how will watering holes change? The new season of Bar Rescue premiering Sunday, May 2 on Paramount Network could provide a peek into the future. Jon Taffer offers his brash expertise to locations around his hometown of Las Vegas to assist an industry decimated by the pandemic. - Janine Schaults

Available on: Sling Orange or Blue with Comedy Extra

To a stranded motorist, the sight of a tow truck driver elicits two opposite feelings at once: elation at the thought of rescue and despair about the bill that will follow. These unsung heroes of the road step into the spotlight in Hustle & Tow, premiering Tuesday, April 20 on A&E. From wild highway crashes to the impound lot, we see an array of tow truck operators from across the country do the heavy lifting. - JS

Available on: Sling Orange and Blue with A&E

Impractical Jokers but with street magic. That’s the idea behind truTV’s newest show Big Trick Energy, which follows magicians and longtime friends Chris Ramsay, Eric Leclerc, Wes Barker, and Alex Boyer as they, “venture into the real world to both shock and awe unsuspecting spectators – and each other – with their unique brand of extreme, provocative, mind-blowing magic.” The trailer above is a lot funnier than we expected, and given the wild success of the Jokers, this 10-episode series could be one of this spring’s surprise hits. -MS

Available on: Sling Blue or Sling Orange + Blue via truTV

The nominees for this first MTV Movie & TV Awards in two years were announced yesterday, with WandaVision leading the way with five nominations, followed by Emily in Paris and The Boys with four apiece. The longtime awards show has made some major changes in recent years, combining TV and film in categories like “Best Hero” “Best Fight,” and arguably the ceremony’s signature award, “Best Kiss.” The MTV Movie & TV Awards are also gender neutral in the acting categories, opting for the more inclusive “Best Performance” in TV and film. MTV will also air a new reality-centric award show, Movie & TV Awards: Unscripted, the following night. As usual, winners will be determined by fans; visit the MTV website to cast your vote through April 30. - MS

Available on: Sling Orange or Blue with Comedy Extra

Looking for your next addictive crime drama? Cruel Summer is here to fulfill your itch for a thrilling whodunit, with a heaping pile of ‘90s nostalgia in the mix. Executive producer Jessica Biel has proven she’s got an eye for surprising twists with The Sinner. Now she turns that sixth sense towards the small-town disappearance of a popular high school “it” girl. Taking place over three summers, this 10-episode season follows the rise and fall of awkward and unnoticed teen Jeanette Turner (Chiara Aurelia) who transforms from an ugly duckling and fills the social void left after Kate Wallis (Olivia Holt) vanishes. -JS

Premieres Sunday, May 2 on HGTV

Imagine the HGTV hit Home Town, but on the road. That’s the basic premise for the new series Home Town Takeover. After receiving over 5,000 submissions on behalf of 2,600 small towns across America, producers settled on Wetumpka, Alabama “because, despite hardships, natural disasters and unexpected setbacks, the community’s undying spirit and resilience showed that they were ready to kickstart a comeback with HGTV’s help.” In addition to hosts Ben and Erin Napier, Home Town Takeover will feature appearances from other celebrities and HGTV talent, including Sheryl Crow, Eddie Jackson, Randy Fenoli, Tamara Day, Steve Ford, Wendell Holland, Ty Pennington, and many others. - MS

Available on: Sling Orange and Blue via HGTV

Swipe through any popular dating app and you’ll come across folks that just seem hopeless. A new spinoff from within the Married at First Sight universe will address this all-too-often occurrence with Married at First Sight: Unmatchables, premiering Wednesday, April 21 on Lifetime. To boost their chances of getting past the first date, sixteen unlucky-in-love applicants from previous seasons will gain wisdom, advice and a makeover from experts Pastor Calvin Roberson and Dr. Viviana Coles. Can the guy who ghosted 15 different people be rehabilitated? Good luck! - JS

Available on: Sling Orange and Blue with Lifetime