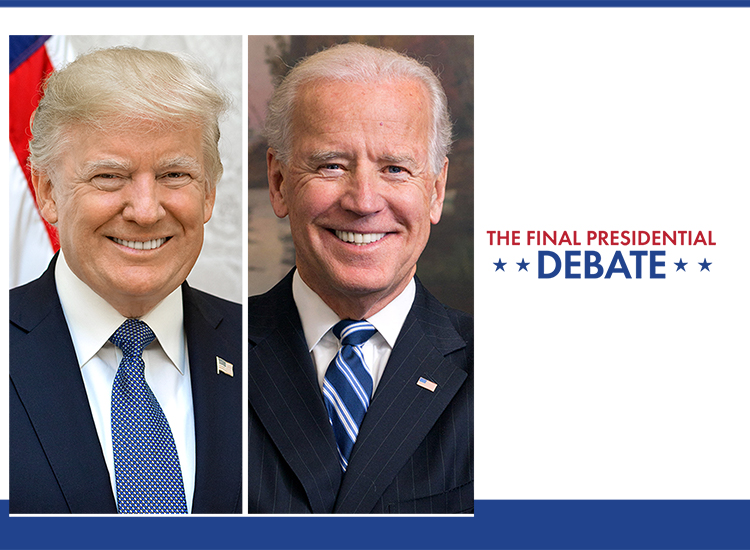 Following last week’s dueling town halls, the final Presidential debate is set to take place tomorrow, Oct. 22. Although over 40 million people have already voted in the election, this will be the last opportunity for the candidates to discuss the issues directly, and a change to the format following the first debate should help them do so. Here are all the details about tomorrow’s event.

Where is the debate and who is moderating?

The debate will take place at Belmont University in Nashville, TN from 9pm-10:30pm ET without commercial interruption. Kristen Welker of NBC News has been picked to moderate. Although the president has called her “terrible and unfair,” his senior advisor, Jason Miller, told Fox News earlier in the month that "she's a journalist who's very fair in her approach."

What are the topics and format?

On Oct. 16, the Commission on Presidential Debates announced that Welker had selected the following six topics (broken up into 15 minute segments) for the third debate, although not necessarily in this order:

Although the format of the debate will be the same as the first — each candidate will be given two minutes to respond to the moderator’s question, after which they will be able to respond to one another — the CPD said on Monday that, “the only candidate whose microphone will be open during these two-minute periods is the candidate who has the floor under the rules." The rule change came after the first debate was widely criticized due to persistent interruptions.

How do I watch?

For the most live news on Sling, subscribe to Sling Orange + Blue with News Extra.