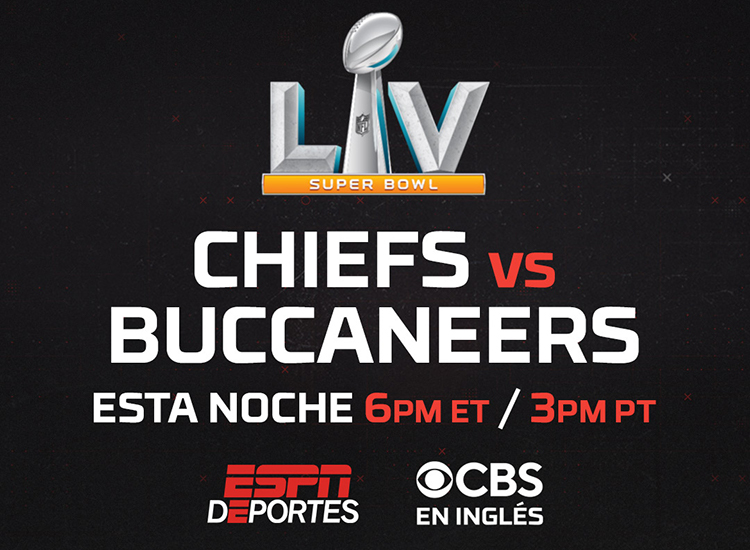 Before we get to storylines and drama of Super Bowl LV, let’s take a moment and appreciate the joy of Tampa Bay fans. Just one year ago, they were a mediocre 7-9 team lead by the inconsistent Jameis Winston, who had a schizophrenic 33 TD, 30 INT season. A year later, they beat his new team, the Saints, en route to the Super Bowl with Tom Brady and Gronk. To Bucs diehards, the last year has been the uplifting sports version of an adage we learned all too well in 2020: Life comes at you fast.

As for Kansas City, what more is there to say? They’re going back to the Super Bowl for the second straight year with a team that looks just as good if not better than the one that won it all last year. The Chiefs are clearly the best team in the NFL and they’ll have to defend their crown against the best player in the history of pro football. The stakes feel historic.

Before we dive into it, let’s take care of formalities.

How do I watch the game?

Spanish speaking Sling subscribers (try saying that three times fast) can watch the game on ESPN Deportes with Best of Spanish + Sling Orange. You can sign up as soon as you finish reading this sentence by clicking the link at the bottom of the page.

Now that you know how to watch, here’s what to look for in the game.

Tom Brady’s list of records and accomplishments is so vast, he has transcended greatness and has entered the realm of surreal. Case in point: With his 10th Super Bowl appearance, Brady will have played in the Big Game more times than any franchise, outside of his former squad in New England. It’s almost unbelievable, but we passed the point of plausibility roughly three Super Bowls ago.

Statistically, Chiefs quarterback Patrick Mahomes is off to an even better start in his career, as he’s about to become the first QB aged 25 or younger to start in two Super Bowls. A win over the GOAT would feel like a torch-passing moment, much as how Brady assumed alpha status after beating Rams QB Kurt Warner for his first championship.

The other major storyline in the game is that it will be played on the Bucs’ home turf of Raymond James Stadium. This will be the first time a team has played a Super Bowl in their own stadium, but as we know, it will hardly be a normal Super Bowl. Due to COVID, the NFL is allowing just 22,000 fans to attend the game, about one-third of the stadium’s capacity. 7,500 vaccinated health care workers will be among those attending the Big Game, and according to CNN, there will be “planned tributes in the stadium and during the broadcast.”

"These dedicated health care workers continue to put their own lives at risk to serve others, and we owe them our ongoing gratitude, we hope in a small way that this initiative will inspire our country and recognize these true American heroes,” NFL commissioner Roger Goddell said last week. “This is also an opportunity to promote the importance of vaccination and appropriate health practices, including wearing masks in public settings.”

On Monday, the Chiefs announced that left tackle Eric Fisher would miss the Super Bowl after tearing his Achilies tendon in Sunday's win over the Bills. That’s a major blow to Kansas City’s offensive line as they prepare to face the two-headed monster of Bucs pass-rushers Shaq Barrett and Jason Pierre-Paul, who had a combined five sacks on Aaron Rodgers in the NFC Championship game. Stopping those two will be a difficult task for whoever replaces Fisher.

On the other side of the ball, Chiefs linebacker Damien Wilson will have to do a better job against tight end Rob Gronkowski, who got free for a number of big plays en route to his best game yet as a Buc (6 catches, 106 yards) in Tampa’s Week 12 loss to Kansas City.

You can’t have Super Bowl Sunday without The Weeknd (sorry). The Canadian crooner will be performing during the Halftime Show, presumably toning down some of the dark and unsettling theatricality he’s brought to recent performances and videos. Country star Eric Church and R&B singer Jazmine Sullivan will duet on the National Anthem, while Grammy-winner H.E.R. will sing “America the Beautiful.” And on Monday, the NFL announced that Miley Cyrus will be headlining the TikTok Tailgate pregame show, which will also feature additional TikTok celebrities and musical guests.

UPDATE: The NFL has announced that Amanda Gorman, whose poem "The Hill We Climb" was a highlight of President Biden's inauguration ceremony, will recite an original poem at the Super Bowl in honor of three people—educator Trimaine Davis, nurse manager Suzie Dorner and Marine veteran James Martin—who exemplified the NFL's "It Takes All of Us" messaging.

Speaking of entertainers, take us home, Brady and Gronk...

You can watch the Spanish language broadcast of Super Bowl LV by signing up for the Best of Spanish + Sling Orange using the link below.