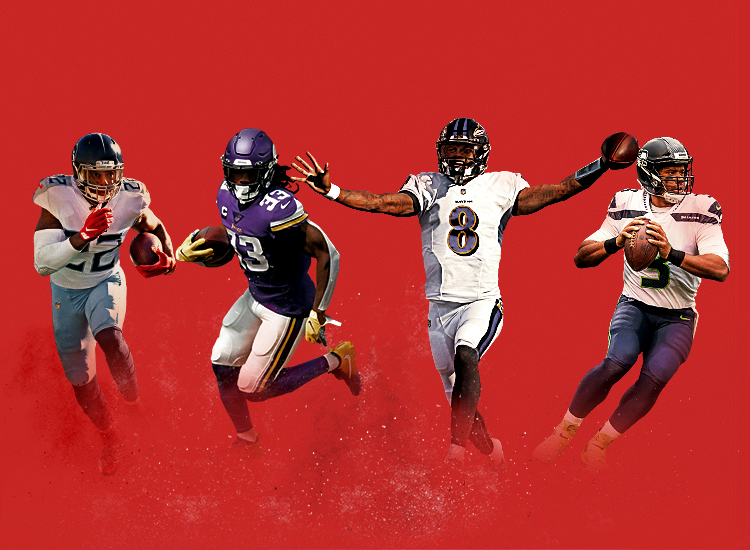 We’re now just over halfway through the NFL season. Given that 2020 has felt like the longest year, you could argue that the first 9 weeks of the NFL schedule have felt like an entire season. Between the steady drip of COVID cases, the injuries to major stars, and the odd image of brand new, completely empty stadiums in Las Vegas and LA, it’s safe to say that the season's first half has been unlike any other.

That doesn’t mean it hasn’t been fun. With the splintering of the New England Patriots dynasty, the Buffalo Bills suddenly look like the class of the AFC East. Tom Brady was smart to sign with Tampa Bay, until the Buccaneers were completely humbled last weekend by a New Orleans Saints team that’s looking dangerous on both sides of the ball. And although the Pittsburgh Steelers are the only unbeaten team at 8-0 (their best start in franchise history), the overwhelming attack of the Kansas City Chiefs has them in position to successfully defend their Super Bowl title.

As we get ready to kick off Week 10 with a great matchup between the Indianapolis Colts and the Tennessee Titans, here’s a look at the consensus picks for the Imaginary Midseason Awards. But first, check out the full schedule of games; we’ll update if any are affected by COVID.

Seattle Seahawks QB Russell Wilson had a rough game in his team’s loss to the Bills last weekend but otherwise, he’s been spectacular. Among current starters, he leads the NFL in yards per game (317.6), and his 28 touchdowns through eight games has him on pace to break Peyton Manning’s 2013 record of 55. If he does that, this award is sewn up but if Wilson has a couple more games like the one against Buffalo, Patrick Mahomes—who has tossed 25 TDs and just one pick through nine games—could surpass him to claim his second MVP in three seasons.

Although he’s technically a running back, Saints star Alvin Kamara leads his team in receptions; in fact, his 60 catches are twice as many as the next closest receiver, Emmanuel Sanders, and just three fewer than the league leader, Bills WR Stefon Diggs. If this award is intended for the player most important to the offense, Kamara’s healthy balance of 70.6 ypg through the air and 58.9 ypg on the ground proves his unique ability to take charge of the attack.

We looked at a number of different midseason awards articles to compile this list and the closest race thus far is for DPOY. About half of the columnists we read had Rams DT and two-time winner Aaron Donald as the favorite, with a smattering of love for Steelers LB T.J. Watt, whose brother J.J. has won the award three times. But the remaining writers had Myles Garrett as the favorite, and I’m inclined to agree. He and Donald share the league lead for sacks with nine, he’s second in total QB disruptions, and has four forced fumbles. Garrett was nicked up against the Raiders but if he can stay healthy and remain productive, the award should be his.

Like the DPOY race, the award for Offensive Rookie of the Year is too early to call. Many writers give the edge to No. 1 overall pick Joe Burrow, who has looked poised and confident under center for the Cincinnati Bengals. However, since entering the lineup in Week 2, LA Chargers quarterback Justin Herbert has played lights out. The former Oregon Duck is in the top 10 in both yards (2,146) and touchdowns (17) and he’s held his own against Hall of Famers like Tom Brady and Drew Brees. If Cincinnati can find success in the season’s second half, Burrow could overtake him, but for the time being, the award appears to be Herbert’s to lose.

This is another close race, with many analysts praising the performance of Washington DE Chase Young. But it’s Bucs safety Antonine Winfield Jr. who appears to be the frontrunner. He broke up what would have been a game-tying 2-point conversion against the Giants and has a loaded stat sheet that includes a pick, two sacks, a forced fumble and four total pass breakups. Winfield Jr. may have lasted until the middle of the second round in last year’s draft but at the moment, he looks like the head of the class.

One year after missing most of the season, Ben Roethlisberger deserves credit for putting the Steelers in position for the AFC’s top seed, but Washington QB Alex Smith came close to losing his leg before rehabbing and returning to the field. He’s a lock for this award.

This is another race that will be decided over the second half of the season. If the Steelers can claim the No. 1 spot in the postseason, Mike Tomlin will have a good case, especially since he’s somehow never won this award despite his team’s success and consistency. However, at the moment, Dolphins coach Brian Flores looks like the favorite. His questionable choice to start rookie QB Tua Tagovailoa appears to have been the right move, as the Dolphins have won four straight, including last week’s thrilling road win over Kyler Murray and the Arizona Cardinals. If Miami makes the playoffs, Flores deserves Coach of the Year.

To get the most NFL football on Sling, sign up for Sling Orange + Blue with Sports Extras using the link below.