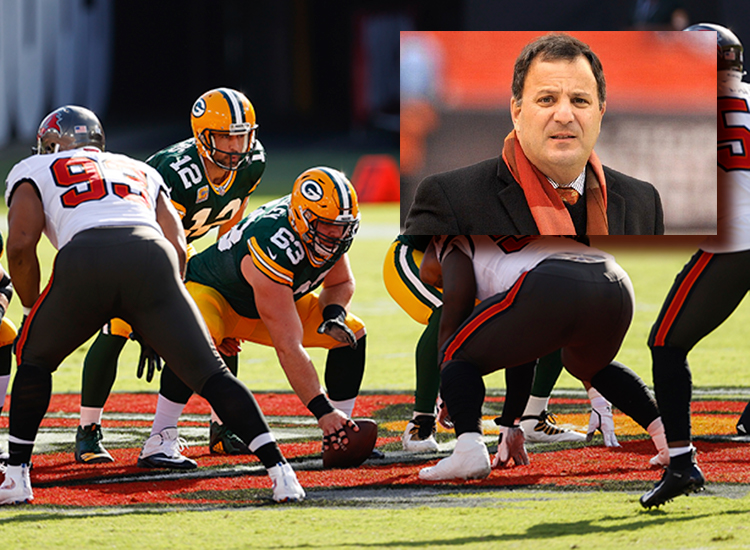 Thanks to a certain head coach from Green Bay, Wisconsin, the name “Lombardi” will always be synonymous with football. Although he’s not related to Vince Lombardi, the aforementioned coaching icon, Michael Lombardi has certainly made his namesake proud. An NFL front office executive, author, and podcaster, Lombardi has spent his entire career in professional football, working directly with some of the brightest minds in the game, including Bill Walsh, Al Davis, and Bill Belichick. Lombardi now hosts The Lombardi Line, which airs weekdays from noon-2pm ET and weekends from 10am-12pm on VSiN.

With the NFL season kicking off this week, we hopped on a Zoom call with Lombardi to ask him about the upcoming season, his sleeper teams, and what Bill Belichick is really like when the cameras are off. Check out our interview, along with the full Week 1 NFL schedule, below. To watch Michael Lombardi and The Lombardi Line, add VSiN to your Sling package today.

Sling: You watch a lot of film during the offseason. What team looked the most different on tape compared to their record?

Michael Lombardi: I think Cleveland was a team that looks better on tape to me. I think they have the elements to play Kansas City. You know, I tend to work backwards. One of the things about watching the playoff games again, I learned this from Al Davis, is it allows you to kind of take a peek back into the season and understand what you have to do to win. You know, if Al were alive today, his whole focus and emphasis would be on ‘How are we going to stop Mahomes? How are we gonna stop Kelce? How are we gonna stop Tyreke Hill?’ That would be all he’d talk about.

Cleveland has a team that can do that. They can control the ball for 34 minutes on the ground, with their passing game, with their run game. So I think Cleveland was [a team that looked better on tape].

Give us a playoff team from last year that will take a step back.

I would be a little concerned about New Orleans. I think New Orleans’ team last year—and I say this with respect to Drew Brees, he’s a Hall of Fame player. But last year was not one of his best seasons, especially at the end of the year. And I think his lack of being able to make plays in the passing game down the field really hurt their offense. Can they overcome that? My sense of it is, with the salary cap and all the issues that they have, I think it will be a problem for them.

However, that being said, Sean Payton is a really good coach. 15 years in the NFL as a head coach, 63 percent winning percentage, he understands how to put a team together and win games, and he’ll coach the quarterback really well. But they would be a team I would be really concerned about coming back again, coming for the playoffs.

Who is your sleeper team this season?

Who will be the lowest scoring team?

When you talk about low scoring teams, typically, it’s a team that has a philosophy that they want to run the ball. So like Detroit. One thing we learned—everybody should learn through watching football through the years—when you run the ball you kick field goals. This whole idea of establishing the run, in 1954, it pissed off Sid Gilman, it’s the most ridiculous thing of all. You never wanna establish the run, you wanna establish the lead. And so, this idea that Detroit’s gonna run the ball lends me to believe they won’t score a lot of points. And they’re not gonna turn the ball over on defense, their defense is very slow. So I think Detroit would be one of the lower scoring teams.

I’ve never heard that before, “establish the lead.”

It’s a Bill Walsh-ism. I mean, Bill Walsh never wanted to establish the run, he wanted to establish the lead. Everybody thinks the West Coast offense is a series of plays. It’s not. It’s about, we’re going to throw the ball to get the lead, and then we’re going to run the ball in the second half to keep the lead. So our goal is to go into halftime with a 10-point lead. So that our defense—which compliments our offense and has pass-rushers on it—those pass rushers, because you have to throw it so much, are gonna create turnovers. And then that 10-point lead is gonna become a 17-point lead and the game’s gonna be over.

It’s hard to turn the ball over when you’re playing from behind. When you’re in the lead, you can turn the ball over. That’s why the most important stat in all of football is first half point differential. That’s the most important stat in football. Whoever scores first, whoever goes into halftime with the lead, is really the team with the most advantage. And that creates turnovers in the second half.

Who is going to win the NFC East this year?

You know, instinctively, I think everybody has Washington. But remember last year, in Week 17, Washington’s playing for everything. And if the Eagles don’t “No Mas” the game—if they don’t Roberto Duran the game—the Eagles are going to win that game, right? And so I’m not sure.

I think [new QB Ryan] Fitzpatrick gives [Washington] a little bit more professionalism, and a little bit of continuity, if he doesn’t turn the ball over. I’m not gonna bite on the Dallas apple, because to me, the Dallas apple is too dangerous. They’re great on paper, but I’m not convinced they’re gonna be good on defense. I don’t know where Dak [Prescott] is with his injury. I think Philly will be better than you think they are. New York bothers me offensively, because they just don’t score any points, and because they’re not creative offensively. How good is Daniel Jones?

If you made me predict, I’d say Washington, because Washington, I think their over/ under number is at 8.5. I think they’ll win 9 games. 9 games might win the East.

How do you think new Patriots QB Mac Jones performed in the preseason?

I think the hardest thing for any young player is the speed of the game. Even though the preseason games are really slow, the speed of the game is different than college, and the players are different. And there's a much higher level of intensity, especially in the offensive and defensive lines. He was accurate, he was decisive, he was quick with the ball in his hand. So that’s really all you’re looking for in the first game. I think Mac’s on the right trajectory towards becoming a really good NFL player. How soon? That’s hard to answer.

Patriots coach Bill Belichick is very hard to get a read on. As someone who worked with him, what would people be surprised to learn about him?

It’s funny, I read a book once, I was working at the Patriots and I read this book called The Obstacle is the Way by Ryan Holiday. And after I read the book, I brought it into Bill’s office and I said, ‘Hey, you need to read this. You’re Marcus Arelius. I mean, this is truly who you are. You know, this book defines you.’ I mean, the obstacle is the way, what stands in the way becomes the way. The ability to block out all the noise. The ability to focus your team. To really put your passion and energy into one job. And to me, that’s what he is. And people take that as offensive, because he’s not trying to be engaging or he’s not trying to be funny. He’s very, very funny when you get to know him, and he’s very engaging. However, his job is to win football games, and that’s what he puts at the number one on his list. I actually became friends with Ryan Holiday over this, because I wrote him an email after I read it, I said, “You wrote the best book on Belichick.” He didn’t even know it.

Note: Answers have been lightly edited for length and clarity.