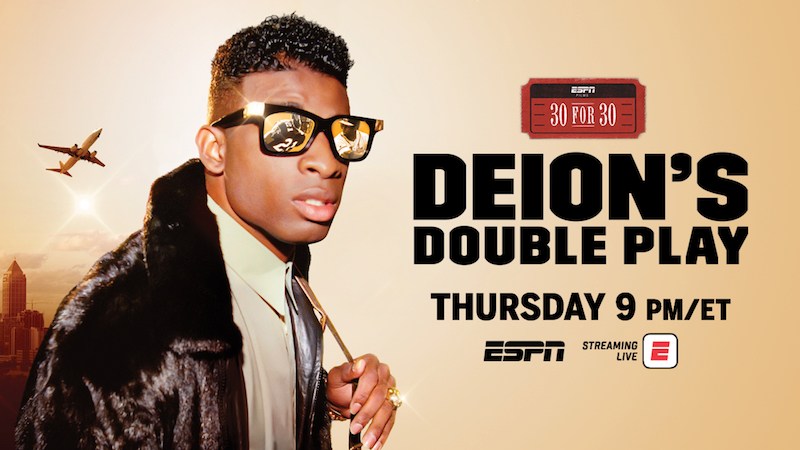 Alter egos many times supersede the importance or influence of their creator. Take Superman and Clark Kent, David Bowie and Ziggy Stardust, and of course Stephen Colbert and Stephen Colbert. In 1991, there arguably was no persona more transcendent than Deion Sanders’ “Prime Time.”

Sanders, one of the few athletes ever to simultaneously play two pro sports, NFL football and Major League Baseball, created his Prime Time persona after realizing that the cornerback position was one of the lowest paid in the NFL. Baseball didn’t call for a larger than life personality, so on the diamond you got Deion. On the gridiron you got Prime, which Sanders saw as his ticket to the forefront of the conversation so that he could get paid.

And did he ever: Prime Time had more curls and chains than than Mr. T and New Edition combined and he earned every penny. For all his talk, he backed everything up on the field, and made clear that if he dedicated himself full-time to either sport he conceivably would have been in either Hall of Fame. Bo Jackson, who also played in the NFL and MLB simultaneously, makes an appearance in this documentary and affirms that the drive he had to play both sports and work as hard as he did was inspired by Sanders.

Unlike Bo though, who waited until his team was out of the pennant race each year before reporting to the Oakland Raiders, Sanders was a full-time football player. Meaning that he would play baseball through July and then report for training camp for the Atlanta Falcons in August.

ATL native Ludacris fittingly narrates 30 For 30: Deion’s Double Play, which focuses on the day Sanders attempted to play two sports in one day. On October 10, 1992 the Atlanta Braves were playing the Pittsburgh Pirates in game four of the NLCS. He then flew overnight to Miami where the Falcons were set to play the Dolphins at 1:00 PM. He would then fly back to Pittsburgh right after the game. Every air traffic controller and UPS driver should take notes on how Sanders and his team defied the laws of physics and pulled off the logistics. The documentary is worth watching alone to see if he was able to pull off the feat.

That’s not the underlying point here though. This documentary matches the standard of Deion’s immaculate athletic ability and the waves brought by Prime Time because it digs deeper into the culture of both sports.

Why is Prime Time even necessary? Shouldn’t the best athlete in the most popular sport in the country, with the least guaranteed amount of playing time, be paid the most? In that 24-hour period he played offense and defense in both sports. He helped bring both the Falcons and Braves teams to the playoffs after both teams had nine-year droughts. For his efforts, he was labeled selfish by the media, coaches and management even though his teammates had no problem with it and highly encouraged it.

Wouldn’t you play both sports if you were at an elite talent in both? If Sanders ever hesitated, Nike surely helped his decision by appending his endorsement deal with an unusual signing bonus: $1 million if he committed to playing both, but reduced to $100K if he picked one or the other. Fat chance anyone is leaving that money on the table if they had the opportunity. Selfish? Nah, Deion proved he was probably even more valuable.

After the Braves won that NLCS against the Pirates, they played the Toronto Blue Jays in the World Series. Deion batted over .500 in that Series. Had the Braves won it, he most certainly would have been MVP. Was the public scrutiny, especially from broadcaster and former catcher Tim McCarver, warranted or even necessary?

Deion would ultimately throw buckets of water on McCarver and write a diss track about him. While Deion’s skills didn’t necessarily expand to the microphone, it highlighted the necessity of Prime Time. Someone had to stick up for Deion, when no one else was.

The more interesting question Deion’s Double Play raises is, has baseball’s obsession with unwritten rules and tradition over everything hurt the sport? When Sanders was excelling, football was beginning to surpass baseball as the country’s most popular sport, a shift only exacerbated by the 1994 MLB Players’ strike. Instead of encouraging the best and most popular athlete outside of Michael Jordan to pursue his passions, the league looked out of touch and discouraged a generation into choosing one sport over the other. We haven’t seen anything like Deion since. Seeing Kyler Murray play for the Oakland A’s and in the NFL would be a boon for both leagues. Instead, he will likely sign where he sees the potential of earning the most money rather than reach for his full potential in both sports.

But after the treatment Deion went through, who could blame him? This documentary isn’t a warning of what will happen to you if you pursue all of your passions. It’s a story of what will happen if you don’t. Deion describes football as his wife. He won two Super Bowls and went into the Pro Football Hall of Fame. But to this day he still has dreams about playing baseball, wondering What Might Have Been. The biggest question Deion’s Double Play ask is, What if?

Deion’s Double Play premieres at 9pm ET Thursday on ESPN, and will be available on demand.