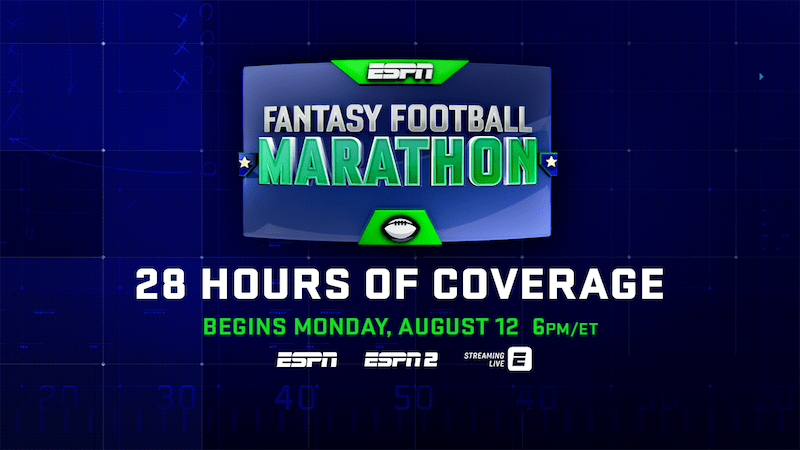 Possibly the worst humiliation I've endured was when I came in last in my fantasy football league, and had to wear a toilet seat around my neck for 24 hours. That all might change if I end up in last place this year: The loser has to do a set of stand-up comedy at open mic night. My catastrophic fear of both public speaking and the trash talk of the sadistic people that came up with these rules in the first place compels me to religiously watch ESPN's 28-hour Fantasy Football Marathon, starting 6pm ET Monday. Check below for the full schedule across the ESPN family of networks.

The bread and butter of the event will be the seven-hour SportsCenter Special: Fantasy Football Rankings, starting 7pm ET Monday on ESPN2. Senior fantasy sports analyst Matthew Berry and NFL Insider Adam Schefter, among many others, will be breaking down top players by position, storylines and draft strategies to make sure you're prepared going into the 2019 season.

Then Katie Nolan of the phenomenal Always Late with Katie Nolan will headline SportsCenter Special: Fantasy Football Draft where 10 commentators will participate in a 10-team, six-round mock draft on 7pm ET Tuesday on ESPN.

If you don't have any clue what you are doing and know your draft order, just pick how the commentators pick and you will be fine. If you're really desperate, you can take advice from a guy who wore a toilet seat around his head as recently as seven months ago. (In fairness to me, though, that was only one of five leagues I played in.)

Remember, by no means do you need a quarterback in the first round. Sure, Patrick Mahomes is far and away the best QB to draft this year. He averaged 417 points or 26.1 points per game. But the next QB on that list was Matt Ryan with 354 or 22.1 ppg. Both QBs were drafted in the later rounds in last year's draft. Aaron Rodgers was the consensus number one QB that I saw go in the first round in many drafts last year, but he ranked just sixth overall in quarterbacks -- one notch above Jared Goff, who I drafted in the 12th round last year as my backup QB. There is more value picking running backs and receivers at the top of your draft. Don't start looking for a quarterback until your fifth pick at the earliest.

Saquon Barkley is the consensus number one pick in this year's draft. If you have the first pick, this is a no brainer. Eli Manning may be playing his last year in the league and has his successor in Daniel Jones. Manning continually dumped the ball to Barkley in a lost 2018 season. Now that Odell Beckham Jr. is gone, expect the reliance on the the second-year back to increase, especially when the rookie Jones inevitably takes over.

Don't worry if you don't have the opportunity to draft Barkley. Christian McCaffrey and Alvin Kamara are similar backs who who excel in the pass game. Ezekiel Elliot would be in that boat but with him holding out with contract issues, he might turn into this year's LeVeon Bell. Speaking of Bell, he should excel because of his year off but be weary of his numbers decreasing with an inferior team in the New York Jets and sophomore quarterback Sam Darnold compared to Ben Rothlisberger and the Pittsburgh Steelers. David Johnson will rebound in a rejuvenated offense under Kliff Kingsbury and an electric running QB in Kyler Murray.

In the second round, it'd be wise to focus on getting a receiver. Antonio Brown and Beckham Jr. are on different teams and may improve with a new change of scenery after not quite living up to last year's lofty expectations. With Brown moving to the west coast, JuJu Smith-Schuster will receive the lion's share of Rothlisberger passes after a 2018 where he already excelled on a tumultuous team. The drama is gone and Smith-Schuster will be the main beneficiary. The Chiefs will have the most explosive offense this year in the league with Mahomes and with Rob Gronkowski retired, Travis Kelce will automatically become the top tight end. With the numbers he puts up, he will compete with any receiver you draft in this round. Tyreek Hill would also be a good pick in this round, provided he can limit his press to what he does on the football field.

For rounds three and four, I always go with the best running back or receiver left available. Running backs are harder to find so usually my third pick is a RB, but there are usually quite a few great receivers available in the third round. Amari Cooper has found new life on the Dallas Cowboys, and with Andrew Luck moving beyond just being able to throw Nerf footballs last year, T.Y. Hilton had a remarkable bounce-back year. But if you can draft Leonard Fournette or Todd Gurley as your second RBs in these rounds after down years, then you my friend may have well just won yourself your fantasy league. Now you're free to draft a QB and not wear a toilet bowl around your head. Best of luck -- and here's to football being back!