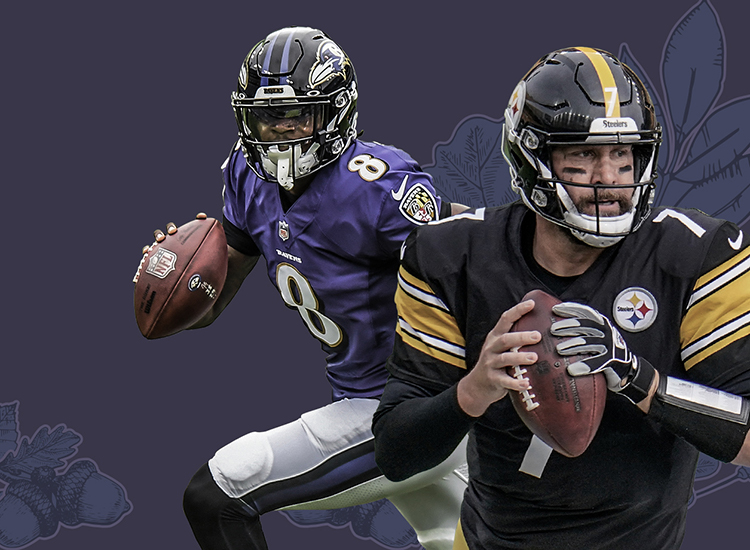 We’ve reached Thanksgiving, which means: A) Turkey and delcious sides; B) This Godforsaken year is nearly over; and C) NFL football. Sadly, we’ll be getting a little less of the latter this year, as the NFL announced today that Thursday night’s game between the Pittsburgh Steelers and Baltimore Ravens was moved following multiple positive COVID tests among Ravens players, including star running backs Mark Ingram and J.K. Dobbins.

Despite the cancelation of this game tomorrow (and perhaps your Thanksgiving plans more generally), we still have a lot to be grateful for. In fact, in a year filled with so much hardship and pain, it’s more important than ever to take stock of the many blessings we often take for granted. In that spirit, here are five NFL players (and personnel) that we’re thankful for. But first, a look at the full Week 12 schedule; we’ll update this post if any other games are moved or postponed.

UPDATE: After originally moving the game to Sunday afternoon, the NFL postponed the Ravens-Steelers game until Tuesday night at 8pm on NBC. Because Baltimore was scheduled to host the Dallas Cowboys on Thursday night, that game has been moved to Monday, Dec. 7 at 5pm ET. It will still on air on the NFL Network and FOX. The changes came after Baltimore announced that at least 12 Ravens have now tested positive for COVID-19, including starting QB Lamar Jackson, who will be relplaced in Tuesday's game by Robert Griffin III.

UPDATE 2: On Monday afternoon, the NFL moved the Ravens-Steelers again, this time to Wednesday afternoon. As a result, a second Week 13 game was moved: In addition to the Ravens-Cowboys game on Monday night, the game between Washington and Pittsburgh will also be played on Monday, Dec. 7. The previously scheduled Dec. 7 Monday Night Football game between the Bills and 49ers will still be played. However, due to new local restrictions in Santa Clara, CA, that game and San Francisco's Dec. 13 game against Washington will be played at State Farm Stadium (home to the 49ers division rivals, the Arizona Cardinals).

Kyler Murray on the Run

After first introducing the turbo button in sports games produced during the NES-era in the ‘80s, God decided to give one to an actual human being when he made Arizona Cardinals quarterback Kyler Murray. If you watch his runs closely, you can often see the exact moment when the second-year QB presses the button (which we assume is in the palm of his non-throwing hand), and jets past defenders like Bo Jackson in Tecmo Bowl. It’s an amazing sight to see, even if, as this ankle-breaking scramble against Washington proves, it’s patently unfair.

Derrick Henry When you Try to Tackle Him

The math doesn’t check out when it comes to paternity, but are we sure that Tennessee Titans running back Derrick Henry and Marshawn Lynch aren’t somehow related? Their punishing and relentless style certainly appear to be cut from the same cloth. Henry treated us to another 90-plus yard touchdown this season, and his second 2020 road win over Baltimore came on a marvelous 29-yard walk off (run off?) TD. Incredibly, neither of those plays were his best moment of this season. That would be his ego-crushing stiff arm of Bills cornerback Josh Norman, which will be forever etched in the stars despite the play itself being negated by a penalty.

Seattle Seahawks wide receiver D.K. Metcalf is having a breakout season in his second year. Some of that has to do with his physique (at 6’ 4” and 229 lbs, he towers over DBs, literally), but the most impressive thing about him may be his hands. With his elite speed, all Russell Wilson needs to do is chuck the ball as far as he can throw it, and Metcalf will come down with it like [inappropriate pandemic pun]. Interfere with him, tug at his jersey, whatever, it won’t matter; if the ball is in his area code, Metcalf will secure it like [innappropriate pun about election results].

Coming off his nearly half-season suspension for last year’s ugly helmet-swinging incident against the Pittsburgh Steelers, it seemed curious that the Cleveland Browns front office rewarded Myles Garrett with a $125 million contract extension, the biggest ever for a non-quarterback. Halfway through the season, that’s looking like a value deal. Although he will miss his second game this Sunday after being placed on the COVID-19 list, Garrett is still a frontrunner for the Defensive Player of the Year Award. His 9.5 sacks were tops before last week, and more importantly, he’s been making big plays when it counts for a team that's off to it's best start in over 25 years. When the heat is on, his engine roars.

Seahawks QB Russell Wilson was the MVP favorite halfway through the season, but let’s get real: Chiefs QB Patrick Mahomes should be in the driver's seat for the award here on out. After last week’s comeback win over the Las Vegas Raiders—in which Mahomes drove his team 75 yards in 1:15 to take a game-winning lead with :28 seconds left—Mahomes now leads the league in yards and yards per game, has the second best quarterback rating, and has thrown 27 touchdown passes against 2 picks.

Mahomes makes everything look effortless but the man who draws up the plays, Chiefs offensive coordinator Eric Bieniemy, deserves plenty of credit as well. Mahomes told Peter King the story behind Travis Kelce’s shockingly open TD to win the game:

"Mahomes came to the sideline with a definite idea—just like in the Super Bowl. He had a play he really wanted to run, and now he had to sell it to coach Andy Reid and offensive coordinator Eric Bieniemy. Mahomes told Bieniemy the play he liked. “And Coach Bieniemy said to me, ‘Well, I like that play, but I really like this other one better.’ He tells me the play, and I think about it for a second. I said, ‘Hey, I like that play a lot.’ That’s what I love about our offense. We communicate. We’re a good team.”

Kansas City’s offense is absolutely breathtaking to watch, and I say that as a Denver Broncos diehard who sneers at every one of their scores. Eric Bieniemy is the conductor of this beautiful, terrible machine, and since it’s likely that he eventually leaves the team for a well-earned head coaching gig, we should all be thankful of the time we get with him behind the wheel of this offense.

Catch the most most NFL on Sling by subscribing to Orange + Blue with Sports Extra using the link below!