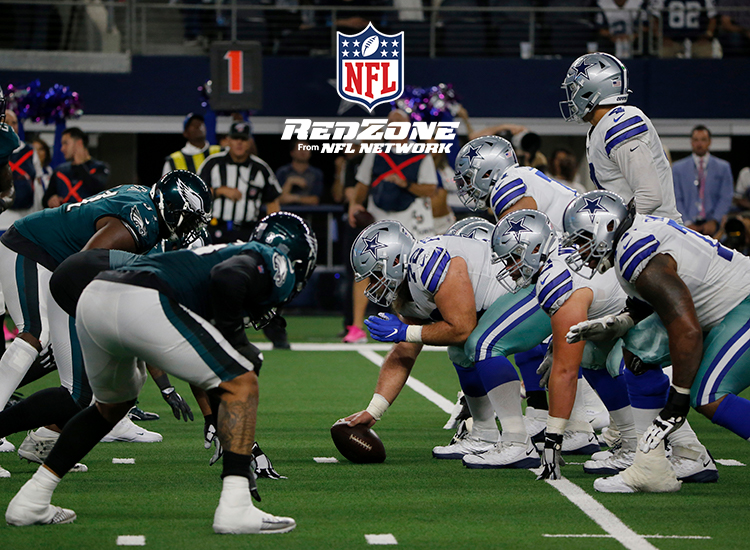 For NFL fans in fall, NFL RedZone From NFL Network might be the most sacred Sunday service this side of church. Every week of the regular season, the network provides seven hours of commercial-free football, bouncing around between the games like players lateraling the ball to each other in the closing moments of a 6-point contest. But unlike those frantic finishes, you’re guaranteed to score with RedZone; the network’s coverage includes “every touchdown from every game,” so you’ll never miss a TD from your favorite team or fantasy player.

Truly, you have to experience NFL RedZone to appreciate it, and lucky you, we’re offering a free preview of the channel this Sunday, Nov. 8 for all Sling Blue subscribers. Below, check out the full Week 9 schedule of NFL games, along with three of the best matchups to look for on NFL RedZone.

Despite their collective 10-5 record, it’s still not clear if either of these teams are contenders or pretenders. The Bears squeaked out wins over the Detroit Lions, New York Giants, Atlanta Falcons, and Tampa Bay Buccaneers to open the season 4-1. But after beating the Carolina Panthers 23-16, Chicago has dropped two straight against the Los Angeles Rams and New Orleans Saints. While their defense looks as solid as ever, the Bears have major questions at quarterback and have been abysmal running the ball.

In Nashville, the Tennessee Titans are in even more of a freefall. After opening the season 5-0 — including a shocking win over the Buffalo Bills following a COVID outbreak that kept the team from practicing for weeks — Tennessee followed up its narrow loss to the undefeated Pittsburgh Steelers with a poor effort in a 31-20 defeat to the Cincinnati Bengals. With the 5-2 Indianapolis Colts suddenly nipping at their heels in the race for the AFC South title, the Titans need to get back on track at home against the Bears or risk sliding into Wild Card position.

As mentioned above, it’s time to start considering if we’re sleeping on the Colts. While much of the attention has been focused on the team’s new starting quarterback, former Charger Philip Rivers, Indy's defense has been magnificent. In addition to the team’s NFL-leading 11 interceptions, the Colts are currently third in total yards allowed (293.4), second in rushing yards allowed (79.9) and fifth in points allowed (19.4).

In conjunction with their embarrassing loss to the Kansas City Chiefs, Baltimore’s not-as-close-as-the-score-suggests 28-24 defeat to the Pittsburgh Steelers last week has added to doubts that Baltimore can get it done against the league’s top teams. Beating a talented Indianapolis team on the road could go a long way to dispelling those doubts, but the Ravens will need a better game from reigning MVP Lamar Jackson, who has looked overwhelmed at times when facing aggressive defenses like the type the Colts play.

The late slate of games features a matchup between two young quarterbacks positioned to be the future of their teams, and possibly the league. Dolphins rookie Tua Tagovailoa made his debut last week against a skilled Los Angeles Rams team, and while Tua may not have lit up the stat sheet, he got a victory on the strength of his defense's outstanding performance. Miami started the season at 1-3, but has run off three straight wins by a combined score of 95-34. If the Dolphins beat the Cardinals, they’ll have won 3-of-4 against the NFC West, the consensus pick for the best division in football.

That’s a big if. Reigning Rookie of the Year Kyler Murray is coming off his bye week, and last we saw him, all he did was roll up over 425 total yards and four TDs to lead his team to an overtime win against the undefeated Seattle Seahawks. With Miami’s success against their division rivals, this is a good measuring stick game for Arizona and if they can pull off the win, they have to be considered a legitimate threat to win their division and compete for a playoff bye.

To get NFL RedZone, along with NFL Network, subscribe to Sling Blue with Sports Extras using the link below!