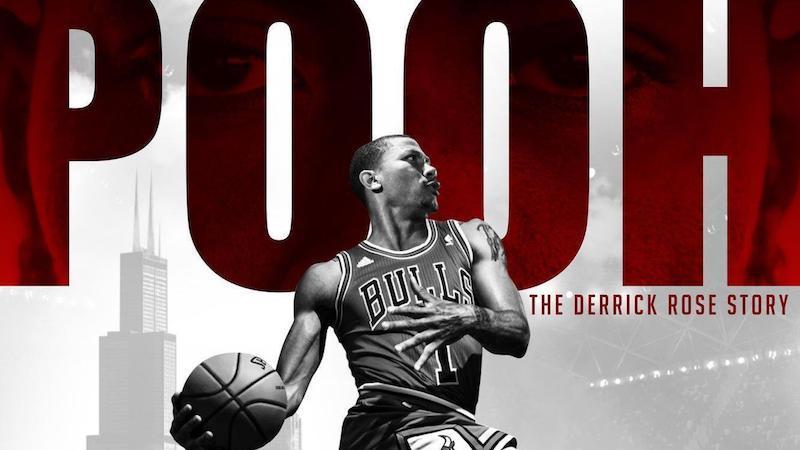 Close your eyes. No seriously, close your eyes. Now picture your ultimate super hero. Are you picturing someone flying? Having lightning speed? Is your hero overcoming all odds to protect their beloved city, even if that city doesn’t particularly love them back? If the superhero you’re picturing isn’t wearing a cape, it’d be a fitting image of NBA superstar PG Derrick Rose.

D-Rose exhibits all of these qualities, and Stadium’s excellent documentary Pooh: The Derrick Rose Story, premiering 7pm ET Thursday, dissects and provides a comprehensive perspective of Rose’s triumphs and heartbreaking lows, mostly engendered by injuries. The reason this doc transcends most others is because it tells a much deeper story than those highs and lows. This story is just as much about Derrick Rose as it is about the city of Chicago. The two are synonymous.

Now you wouldn’t think of a superhero requiring four surgeries in nine seasons and miss 256 days of work. But shouldn’t winning rookie of the year and MVP in his first three years negate that? He was only the seventh player in NBA history to do that, and only the second Chicago Bulls player (after Michael Jordan) to do it. Not to mention, he is the youngest player to ever win the MVP award.

Maybe nothing exhibits his heroics more than the fact that he played his career-best game after going through so much adversity. Playing for the Minnesota Timberwolves on Halloween night in 2018, Rose scored a career-high 50 points on his fourth team and third in as many years. After the game, LeBron James said that even when a super hero is knocked down, he’s still a super hero at the end of the day. “D-Rose showed why he’s still a super hero.” James and the Miami Heat might not have torn through the East the way they did at the beginning of the decade if Rose had been at full strength. The tears flowing down this stoic and reserved man’s face felt like retribution and a sense of relief. For the first time, in a long time, all that seemed to matter was basketball.

Because Rose is credited as an executive producer, this documentary might appear to be a hagiography, but it doesn’t gloss over any hardships or weaknesses that Rose had, including his involvement in a couple of serious criminal cases. The film started filming in 2016, right before he was heartbreakingly traded from his hometown Bulls, who chose him number one overall in 2008. The piece succeeds because it wasn’t rushed. It tells a more complete story of Rose’s life instead of capitalizing on this moment, when Rose’s troubled career is on an upward trajectory.

Extensive interviews with Rose’s mom and brothers (one of whom became a villain with the media), the Bulls’ Vice President of Basketball Operations, coaches Tom Thibodeau and John Calipari, teammates Joakim Noah and Jabari Parker (who Rose may have inspired more than anyone), fellow famous Chicagoan Chance the Rapper, and Rose himself help to paint a complete picture. After years of knocks for being a poor speaker and a star that never talks, his is one of the most refreshing perspectives.

Rose grew up in the Englewood neighborhood in Chicago. He played basketball primarily in Murray Park, commonly referred to as “murder park.” His grandma nicknamed him Pooh Bear because of his yellow skin tone when he was born. That name didn’t stick just at home but throughout the entire city of Chicago throughout high school and in the national championship he played in at Memphis. This man is his city, maybe more than any athlete can parallel. Sure, Jordan and Scottie Pippen are the best to ever put on a Bulls jersey. But nobody ever gave back more than Rose while representing that jersey.

A radio announcer describes Rose’s story as the most polarizing in Chicago sports history. There are many who criticize Rose for all the games he missed and not playing in this historically blue-collar city. Thoughts of all the missed opportunities and potential banners hanging in the rafters is still a sore subject. But the South Side of Chicago will defend Pooh like their little brother, just like his real brothers defended him constantly from the predominantly white media.

This story is also about the deep segregation of Chicago, and confronting difficult topics like this is why this documentary is important; Rose’s story is much bigger than basketball. It’s nice to hear from the perspective of this superhero. We still have the chance to admire the rose while we can still smell it.