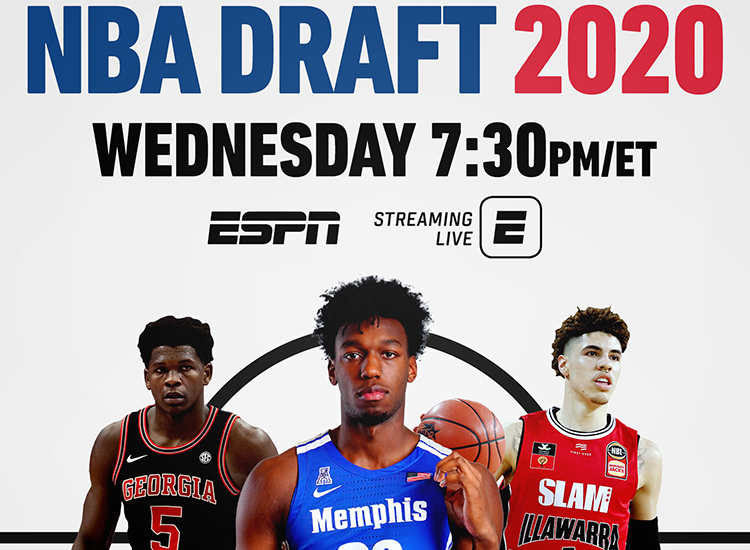 Following a most unusual NBA season (and an anticlimactic NCAA one), the 2020 NBA Draft is set to go down tonight beginning at 7:30pm ET on ESPN. Last year’s draft was one of the most hyped in years, as the New Orleans Pelicans selected Zion Williamson with the No. 1 pick. However, it was the player selected right after him—Memphis Grizzlies point guard Ja Morant—who ended up winning the Rookie of the Year award, a testament to the guesswork of identifying which players will succeed in the most talented basketball league on the planet.

Here’s a look at three storylines to watch for during tonight’s draft. For a full look at the draft board, follow this link.

Most mock drafts feature a top 3 of Anthony Edwards, James Wiseman, and LaMelo Ball. Since landing the top pick in the draft, the Minnesota Timberwolves have been coy about who they’re going to select, a smart tactic that juices potential trade offers. If they hold onto the pick, the T-Wolves are almost certain to select a guard to complement their core of D’Angelo Russell and Karl-Anthony Towns. That would whittle their options down to Edwards and Ball, and while Ball had been favored as the top pick for the past several weeks, most experts now believe that, unless Minnesota makes a trade, Edwards will get the nod, with Ball going No. 3 to the Charlotte Hornets.

What Do the Dubs Do?

Memphis center James Wiseman is the consensus pick to go No. 2 to the Golden State Warriors, whose injury-plagued 15-win season put them in prime draft position. ESPN has praised Wiseman for “his ability to get up and down the floor, cover ground and elevate around the rim quickly with explosiveness and power.” But given their existing core of championship-contending talent, many think that the Dubs could end up trading this pick. If so, teams will need to offer more than gold, frankincense, and myrrh for Wiseman (sorry). As of this writing, the Warriors only have a single first round pick in the ‘23 and ‘24 drafts, so they could leverage their position in this year’s draft for more picks down the line. As always, Golden State is in an enviable position.

The Warriors may not be the only team looking to make a trade. The pandemic has completely altered the evaluation process that most teams rely on to make their picks, adding another layer of uncertainty to a circumstance that’s inherently hit-or-miss.

"One-third of the top decision-makers calling in picks tomorrow are doing it based on film and chance,” a league source told CBS Sports. “Maybe their model is to catch up late and aggregate enough info, but this year they don't have that."

While there hasn’t yet been any movement among teams picking in the Top 10, there have already been 10 trades of the first-round picks between No. 14 and 30. Just this morning, the New York Knicks made a trade with the Utah Jazz to acquire the No. 23 pick, and according to Marc Stein, the Boston Celtics—who currently have three first-round picks—are “searching for trade pathways to get into the top three” of tonight’s draft. There are also rumors that the Chicago Bulls could be looking to move up two spots into the Warriors’ No. 2 slot to acquire Wiseman.

Even if these particular moves don’t come to fruition, there’s a possibility that the top of board looks very different tonight than it does just hours before the draft.

You won’t want to miss a minute of the 2020 NBA Draft; use the link below to sign up for Sling Orange with ESPN at the best price and be sure to tune-in at 7:30pm ET for full coverage and analysis.

get espn on sling
caret