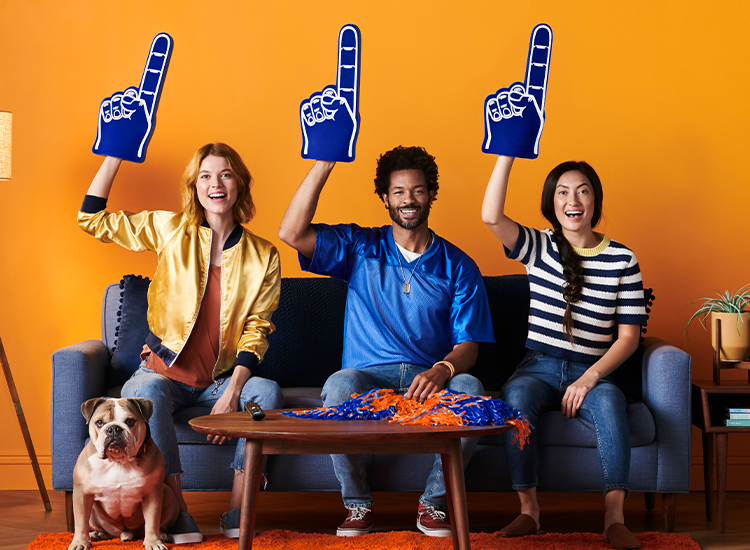 Alex Castle
SPORTS
Share this:
If you’re anything like us, you may be wondering how you’re going to fill that sports-sized void now that most leagues are either cancelled or postponed. Hopefully live games are back in no time, but in the meantime, Sling TV is putting together a weekly list of what to watch in the sports world. Check back here every Friday for updates.

If you’re looking for something a little louder, All Elite Wrestling presents the second edition of its franchise-launching AEW: Double or Nothing live from Las Vegas (8pm ET, $49.99 pay-per-view), featuring a title match between star Jon Moxley and upstart challenger Brodie Lee for the AEW World Championship, and between Lance Archer and Cody for the first-ever AEW TNT Championship, to be presented by boxing legend Mike Tyson.

Germany’s Bundesliga is back for a second week of post-COVID play, with teams resuming their season where it left off in empty stadiums. (It’s a little weird.) This week’s matches:

NASCAR has also returned to empty grandstands -- this week the action moves to an empty Charlotte Motor Speedway for the Coca-Cola 600, with Kevin Harvick, Kyle Busch, and Martin Truex Jr. at the top of the odds board, starting at 2pm ET Sunday on FOX in select markets.

For those with a 6’6” hole in their Sunday night plans since the end of The Last Dance, ESPN follows up with part 1 of 30 for 30: Lance, a two-part look at disgraced U.S. cycling champion Lance Armstrong, who totally dominated the sport for over a decade before retiring in 2011 while under investigation for doping violations -- violations Armstrong vehemently denied for years and eventually confessed to. (9pm ET Sunday, ESPN)

Memorial Day Weekend is traditionally like Christmas for racing fans, thanks to the annual running of the Indianapolis 500. But, there’s not much traditional about 2020: COVID-19 has forced the cancellation of this year’s event. ESPN2 feels your pain: The Race All-Star Series, which pits pro racers against skilled amateurs in simulators, continues at noon ET Saturday on ESPN2; they’re presenting a marathon of old Formula-1 races on ESPN2, starting at 6am ET Sunday, followed by a few more virtual Grand Prix starting at 11am ET. And then it’s back to old races, with replays of the 2006, 2011, and 2014 Indianapolis 500s running back to back starting at 3pm ET.

As conventional sports slowly begins to come back, we’re seeing less Esports filling all the empty hours on the sports networks, but ESPN2 still has NBA2K League running at 7pm ET Friday, and Madden NFL 20 Bowl at 11pm ET Saturday.

And of course there’s never been a better time to watch old classic sporting events. ESPN presents a marathon of old Mike Tyson fights, mostly from before he’d won the title, starting at 5:30pm ET Saturday; Game 7 of the 2016 Cubs/Indians World Series will replay on ESPN at 7pm ET Tuesday; Kobe Bryant’s final NBA game, in which he scored 60 points against Utah at the end of the 2016 regular season, will replay at 7pm ET Wednesday on ESPN; and, though it’s not exactly sports, NBCSN is planning to re-air episodes of Saturday Night Live that featured athletes as hosts. Full schedule: