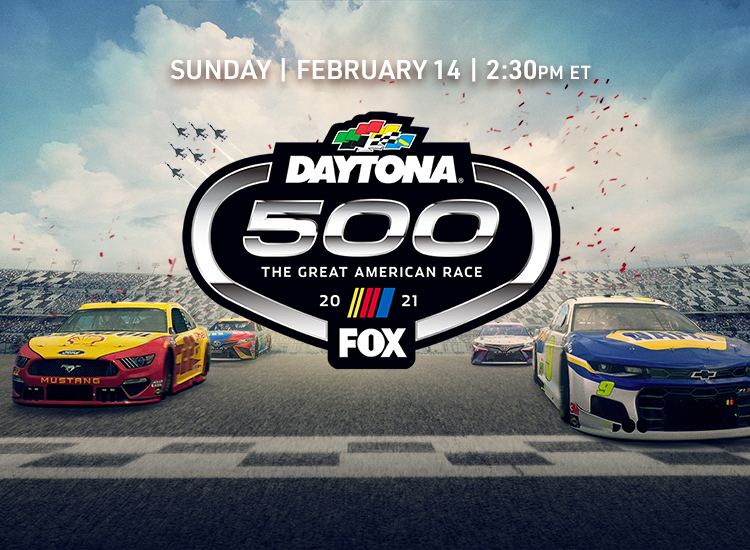 Of all the major professional sports in North America, NASCAR has probably been the least affected by COVID-19. With the competitors already socially-distanced, the biggest changes to the sport have been to the pit crews and fans. Add in the postponements plauging college sports and other leagues, and NASCAR is rolling into the Daytona 500 firing on all cylinders.

The 2021 NASCAR season gets underway this weekend with the Daytona 500 (Sun., Feb. 14, 2:30pm ET, FOX). Below, check out the first half of the NASCAR schedule, along with a preview of America’s biggest race.

If defending Daytona winner Denny Hamlin can take the checkered flag, he’ll do something that’s never been done before in NASCAR history: Win three straight Daytona 500s. Having also won the race in thrilling fashion in 2016, Hamilin has a great shot at claiming his fourth Daytona 500 in five years, and he's currently the betting favorite at +800 odds. Speaking with For The Win earlier this week, Hamlin said that a victory on Sunday to cap a Daytona threepeat would “probably be the most significant win of them all.”

Denny Hamlin is perhaps the best NASCAR driver never to win a Cup Series Championship, a label he’s hoping to shed with the help of another legendary sports figure: Michael Jordan. Last September, the duo announced that they had formed a new Series Cup team, 23XI Racing, and they quickly signed one of NASCAR’s fastest-rising stars, Bubba Wallace.

His Airness isn’t the only celebrity to get a foothold in the sport. Latin pop superstar Pitbull recently announced an ownership stake in the newly formed Trackhouse Racing, which will be the home of Daniel Suárez, NASCAR’s first Mexican racer. Pitbull—who will also serve as the Grand Marshal at the race this weekend—said that he was attracted to Trackhouse Racing in part because of co-owner Justin Marks’ commitment to promoting STEM education.

How Will Schedule Changes Affect the Season?

NASCAR revamped its schedule this year, adding a road race at Daytona next Sunday to go with six other road courses. That adjustment could favor defending NASCAR Cup Series Champ Chase Elliott, who has won the last four races on road courses. NASCAR will also hold its first Cup Series dirt race since 1970 in Bristol on March 28. It's hard to know how these changes will affect the Playoff race (and NASCAR’s nine-month season makes it next to impossible to predict a winner in February), but a lot of the experts like Kyle Busch to bounce back from a rough 2020 campaign, as well as Hamlin to finally claim his first Cup Series Championship.

To get the most NASCAR on Sling, sign up for Sling Blue + Sports Extras using the link below!