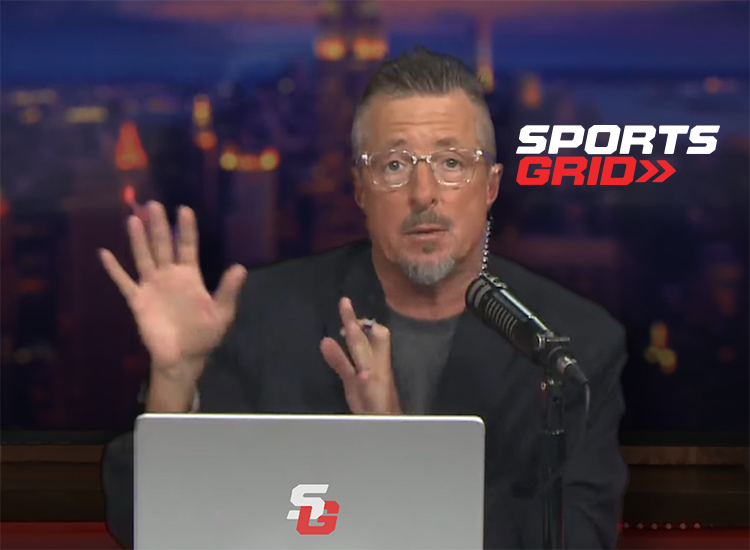 From March through late July, America suffered through the longest stretch we’ve ever endured without games in at least one major team sport. Now it’s August — normally a quiet time on the sports calendar — and it feels like we’re drinking from a fire hydrant of live sports.

Such are the strange circumstances of life in 2020. The coronavirus pandemic has proven to be a major force of disruption in all facets of our culture, including the sports world. However, now that we’re blessed with games from noon until night, August is the perfect time for Sling to welcome the newest network to our family of Free channels: SportsGrid, the first 24-hour sports network to focus on sports wagering and fantasy.

Speaking with the company’s founder and president Louis Maione, you get the sense that he has a clear vision for the network — and the future of sports.

“SportsGrid is a lifestyle channel,” Maione told Sling during a Zoom interview. “It’s a lifestyle channel in the way that we’re all sports-centric, and it’s an engaging, entertaining info-type channel. And we’re trying to take that core sports fan, who loves gambling, and then take the subsets off that.”

“What does that mean? Fantasy is a detailed, drilled-down version of sports and gambling. If you know each player on both sides of the equation, and you have SportsGrid giving you the edge, you can make informed decisions. And when you start playing your fantasy, it makes you smarter. It makes you more engaged. It keeps you involved. Well, those folks are more likely to go, then, and place a bet.”

In order to do that, said folks need to have a outlet where they can wager legally. This is where Maione’s vision is 20/20, figuratively and literally. According to Axios, sports betting is now “legal and fully operational” in 18 states plus Washington D.C., with an additional four states soon joining their ranks after passing bills to legalize it earlier this year. A temporary sportsbook recently opened in D.C.’s Capital One Arena, making it the first U.S. arena to allow betting on site. Many others will soon join in, as the NFL approved on-site sportsbooks, where legal, as part of their new collective bargaining agreement with the player’s association.

All of this indicates a shift away from puritanical attitudes toward sports betting, a change that’s really only beginning.

“What you have to say to yourself is we’re in the first, second-inning of [legal sports] gambling, because we’re not even penetrating 50 percent of the states,” Maione says. “I think once the penetration goes over 50 percent, one of the things that’s going to happen is leagues are going to get even more involved.”

Their involvement will continue to accelerate the destigmatization of sports bettors. Scott Farrell — the longtime sports radio personality who joined SportsGrid in January as host of Scott Ferrall: Coast to Coast — is beyond relieved to finally talk sports in the context of wagering.

“When I did terrestrial radio, you know what I dealt with? Lawyers, that’s what I dealt with,” Farrell says with his signature gravelly rasp. “Every week, I had lawyers in my garage, they were so painful. They treated sports betting like I was a heroin dealer. So at least at SportsGrid, I can talk sports betting freely and openly.”

“When [Lou] came to me he said, ‘Come talk sports betting. No rules.’ And I jumped at the chance,” Farrell adds. “The guy really gave me a platform to do my thing. You have to understand, my show for the last 30 years, I’ve been pretty much the guy on national radio that has been talking about sports betting and spreads and money lines, long before anyone else came along.”

SportsGrid also recently inked a deal with FanDuel, which is the number one mobile sportsbook in the country. With sports wagering moving to online apps, SportsGrid’s streaming programming created a natural partnership. But beyond their complementary interests, FanDuel and SportsGrid have a talent-sharing agreement, which is bringing in rising sports personalities like Pat McAfee.

“The Pat McAfee Show is, to me, very special because he relates to the audience. And he does it in a good way: He’s social, he’s very engaging, he’s endearing, and he’s very informative. So it brings that whole lifestyle part into the channel.”

While the lifestyle component is important, there are few other channels that can boast about helping viewers earn money. With their show In-Game Live, SportsGrid can help fans take advantage of the shifting betting lines, in real time.

“You get a team in football that is favored by 14-points and the other team comes out, and there’s a bad play call or a missed play call or a missed read, things of that nature, that causes a long touchdown,” Maione says by way of example. “Well now the underdog is up by 7; that totally swings the odds. If you know this team is much, much better and you have the edge and the gaming intelligence and all the odds from SportsGrid — now you just had a quick line move that may only last a minute, because when the other team gets the ball, they may score right away and it’s an even game within the first three minutes. So we’re gonna give you those tools and the edge to place those in-action, live betting opportunities.”

With top-notch talent, a novel angle on sports, and a foothold in an industry that’s expected to earn $155 billion globally by the end of 2024, SportsGrid has put itself in a great position to succeed. No matter which teams actually hoist the trophies in 2020, SportsGrid already looks like this year's big winner in sports.

SportsGrid is now available on Sling Free, click the link below to watch, no sign-up or credit card required!