Happy Fourth of July weekend! Though the pandemic has largely taken some of the more traditional activities for the weekend off the menu (and, if you live in a big city, removed quite a bit of the novelty from fireworks), the sports world continues to move toward a new normal, with MLB, NBA, and NHL all moving toward a midsummer return, four of the five major European soccer leagues back on the field, and various events happening in golf, tennis, and of course, cornhole.

But it wouldn’t be the Fourth of July without the Nathan’s Famous Hot Dog Eating Contest (noon ET/ESPN). Though COVID concerns have forced the event away from its traditional perch at the corner of Surf and Stillwell in Coney Island, New York, the mildly horrifying show must go on, starting with the women’s contest and followed by the main event, and then, presumably, tummyaches.

We’ve also got a full weekend of auto racing: IndyCar fans can catch the GMR Grand Prix (noon ET, NBC in select markets) live from Indianapolis Motor Speedway, followed at 3pm ET on the same track and the same channel by the NASCAR Indiana 250. If you prefer four-legged racing to four-wheeled, keep it locked on NBC (in select markets) for The Breeders’ Cup Challenge series, live at 5pm ET Saturday from Belmont Park. Still got a need for speed? The IMSA Weathertech 240 at Daytona drops the green flag at 6:05pm ET on NBCSN, and ESPN has the Austrian Grand Prix (Formula One) at 9am ET Sunday.

There’s a full docket of soccer on Sling this weekend as well, with Premier League, Serie A, La Liga, and the German Cup Final: Atletico Madrid face RCD Mallorca at 3:50pm ET Friday on beIN and beIN Espanol; Saturday is just an embarrassment of soccer riches starting with Premier League games Norwich City vs. Brighton (7:25am ET), Manchester United vs. Bournemouth (9:55am ET), Wolves vs. Arsenal (12:25pm ET), and Chelsea vs. Watford (2:55pm ET) on NBCSN; beIN Sports has La Liga games Real Valladolid vs. Deportivo Alaves (1:20pm ET) and Granada vs. Valencia (3:50pm ET); Bayer Leverkusen and Bayern Munchen meet for the German Cup Final at 1:55pm on ESPN; and Sunday NBCSN has EPL matches Burnley vs. Sheffield United (7am ET), Newcastle United vs. West Ham (9:10am ET), Liverpool vs. Aston Villa (11:25am ET), while ESPN carries Serie A matchup Parma vs. Fiorentina (1:25pm ET).

As the NBA continues its slow roll toward a July 30 restart, you can tide yourself over with The Basketball Tournament, a single-elimination 5-on-5 tournament consisting of 24 self-formed teams, chosen from an open-application process, and featuring former and hopeful college and NBA players. This tournament also uses “The Elam Ending,” the format adopted by the NBA All-Star Game this year, that ensures every game ends on a winning shot (rather than running down the clock). The Basketball Tournament starts with the round of 24 at 3pm ET Saturday, runs daily thru July 12, and concludes with a championship game on July 14, all on either ESPN or ESPN2.

Some other notable miscellaneous events: The American Cornhole League moves toward its Championship with matches at 1pm ET Saturday and noon Sunday on ESPN; Competitive fishing with Bassmaster Elite Series at Lake Eufaula is happening at 11am ET Sunday on ESPN2; Tennis Channel has two tournaments, the GVC Eastern European Cup, starting at 6am ET Friday and the DraftKings All-American Team Cup starting at 6pm ET Friday and Saturday, and 1pm ET Sunday; the PGA Tour stages The Rocket Mortgage Classic starting at 3pm ET Friday and 1pm Saturday and Sunday on the Golf Channel; and Jon Hamm, Jason Alexander, Kevin Pollak, Kelly Slater, and other boldface names take part in The King’s Celebrity Poker Challenge to benefit the World Central Kitchen, starting at 7pm ET Friday on FS1. I would imagine that the players will have to wear masks to sit at the same table, which should assist their poker faces… 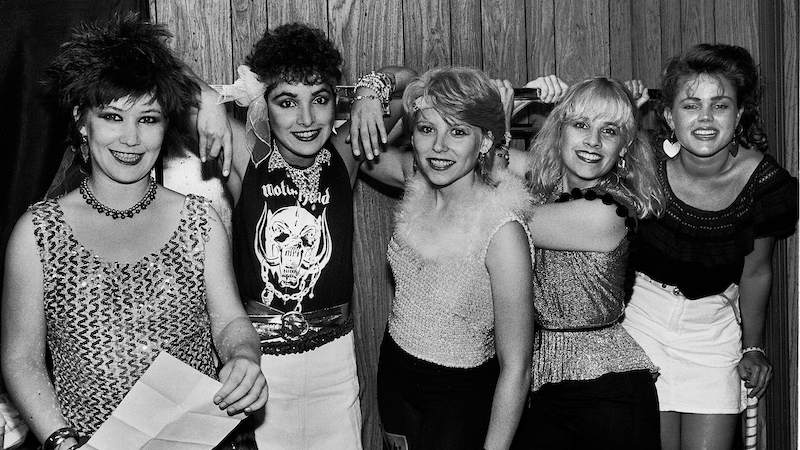 'The Go-Gos': Our Lips Are (No Longer) Sealed