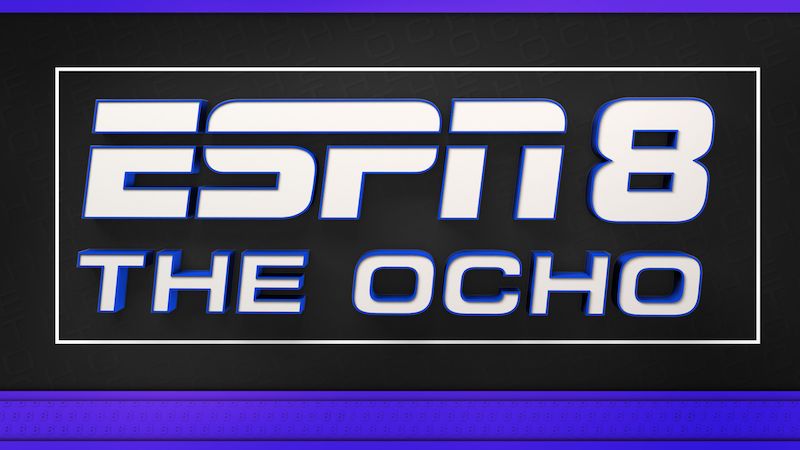 The biggest day in sports is back in it’s infinite glory. We’re of course talking about of ESPN8: The Ocho. Where else can you watch Dodgeball: A True Underdog Story, Cherry Pit Spitting, Acrobatic Pizza Trials and Lawn Mower Racing all in the same place? Well the World Wide Leader has you covered as The Deuce (ESPN2) will turn into The Ocho for a day. If that wasn’t enough, forget Christmas coming early, ESPN8 is coming to you a day early on Wednesday, August 7. “Bold Strategy Cotton.” Here is some of what you can look forward to a day that is more magical than rainbows and unicorns combined.

This year includes many more events than in years past including Acrobatic Pizza Trials as competitors will have their freestyle acrobatics and biggest dough stretch on display. Look for the “LeBron of pizza acrobatics” and five-time world champion Tony Gemignani to run away with this one. This event has been held since the mid-1980s at pizza expos and should be left to the professionals. Jugglers and flair bartenders need not apply.

Great American Beard and Moustache Championship – 9:00 AM ET on ESPN8

As for the Great American Beard and Moustache Championship always put your bets on Chuck Norris. The 2019 edition doesn’t start until November 8-9 but relive the 2018 competition where they raised a facial hair record of more than $25k for The Humane Society of the United States.

Remember those phones you used to have that played like three games, barely made phone calls, and were really only good at telling the time? Well, this is the robot version of dumb phones. Just add fighting to the equation and it becomes one of the best events of the day.

Stupid Robot Fighting pits hanging puppets made of everything you can imagine from a recycling bin ranging from CD players to cat toys. The robots are controlled by an operator to beat the other rusty robot into submission. Our money is on El Minion because good luck finding something better than robots and minions.

Everyone has a bizarre skill they happen to be really good at, whether it be riding a bike with no handlebars, being scary accurate shooting rubber bands at unsuspecting victims or solving a Rubik’s Cube whilst blindfolded.

The Moxie Games aims to take that strange skill of yours and combine it with say, a Super Ball speeding directly at your face, to make for some intriguing competition. Along with such offbeat sports as Dodge Juggle, Foot Darts and Zoneball, the Moxie Games will be featuring Headis, Lightspeed Saber and Combat Juggling.

Started by René Wegner in 2006, Headis has evolved from something German students did when bored to a worldwide competition with tournaments, rankings and even a world cup.

Combining the strategy of ping-pong with the leg work of tennis (and probably a few concussions), Headis is played by two competitors at a standard ping-pong table with a soccer ball. The rules are similar to ping-pong but players are only allowed to touch the ball with their heads. They can, however, touch the table with any part of the body (including getting on the table itself), provided they touch the ground before playing another ball.

A match is typically a best-of-three sets format, with each set being played to eleven points – the exception being that the winner must win by two points.

Imagine thinking “I enjoy juggling, but screw that guy.” That’s the idea behind combat juggling, where teams or individuals – each juggling three clubs – attempt to keep juggling while also trying to disrupt their opponents.

If a player drops a club or has one stolen, they’re out. The last person left juggling is the winner. And don’t worry, players can’t just spear one another in order to make someone drop their clubs. Attacks can only be made to the opponent’s clubs. Any contact with the body will result in a penalty.

It’s hard to believe an entire sport was launched based off one of the original viral videos:

Okay, maybe that’s not quite accurate but it was fans of a series that took place in a galaxy far, far away that began the Lightspeed Saber League, one of a growing number of LBFOs (Light-Based Fencing Organizations) around the world.

Lightspeed Saber is a new form of fencing which uses an LED sword equipped with a polycarbonate blade. The rules are much different than fencing you’d see when channel-flipping during the Olympics, as combatants can strike anywhere on the body as opposed to just the torso in traditional fencing. Fighters also employ a number of different techniques, including using two hands or switching hands during a match.