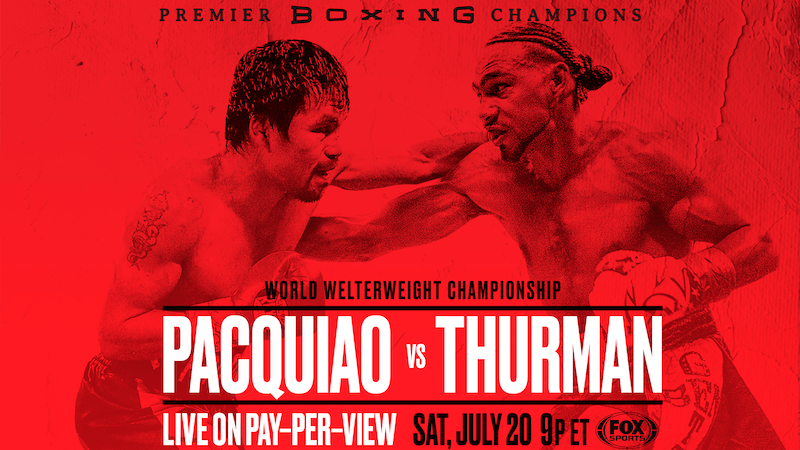 Senator Emmanuel Dapidran Pacquiao of the Philippines, known to most as Manny Pacquiao, will step into the ring at the MGM Grand Garden Arena in Las Vegas Saturday to square off against Keith “One Time” Thurman to battle it out for the WBA super welterweight title.

Pacquiao, the only boxer in the sport’s history to hold the title in eight divisions, recently reunited after a split with longtime trainer Freddie Roach. After Pacquiao’s loss to Jeff Horn in 2017, Roach told him that being a senator was incompatible with being an elite boxer, a hard truth that led to the two men parting ways after more than a decade together.

A year later, without Roach in his corner, Pacquiao defeated Lucas Matthysse with his first KO since putting Michael Cotto on the canvas in November 2009. Despite that newfound success, Pacquiao found life without Roach wasn’t what he bargained for, and invited his mentor back into his corner. Roach was only too happy to oblige and in January 2019, Pacquiao defeated Adrien Broner in a unanimous decision with Freddie in his corner.

Roach is clearly in fighting trim, at last as far as talking trash goes. Just last month in dissing Thurman, Roach said “If Thurman comes straight in and goes after Manny… he is going to be cooked. Chef Manny will be serving him up on a platter like Lobster Thurmandor.”

Roach further denigrated Thurman by cracking “Thurman is slower than Heinz ketchup. Manny is going to beat him 57 ways on July 20,” a joke he liked so much he posted it on a wipe board in the gym where Pacquiao was training. No word yet as to whether Roach will be making his way to the Borscht Belt once Manny finally retires.

Thurman’s most recent fight was in January, a 12-round majority decision over heavy underdog Josesito Lopez. It marked the end of a 22-month absence due to elbow surgery and then a hand injury. That win in January brought Thurman’s career record to 29-0 with 22 knockouts.

Naturally, Thurman has expressed his intention to “retire Manny Pacquiao.” While the bravado is to be expected, there is exactly one man on the planet who’s got what it takes to retire Pacquiao, and that’s Pacquiao.

Pacquiao turned 40 last December and finds himself, like the New England Patriots’ Tom Brady, pushing the limits of what was previously thought possible for athletes his age. Other than Pacquiao, only Sugar Boy Malinga, George Foreman and Bernard Hopkins have ever held titles in their 40s. But father time is clearly gaining ground on the boxing legend as 4 of his 7 career losses have come in his last 11 fights.

Pacquiao’s age isn’t the only number that puts him at a disadvantage against Thurman, as he also gives up 2 inches of height and 3 inches of reach, but Thurman’s never boxed a legend before and Vegas doesn’t think he’s quite up to the task — Pacquiao is the favorite at -145, with Thurman at +125.

Watch coverage of Pacquiao vs. Thurman Saturday, July 20, starting at 9pm ET on FOX pay-per-view. If you’re a really hardcore fight fan, you can catch the weigh-in Friday, July 19, at 4pm ET on FS1.