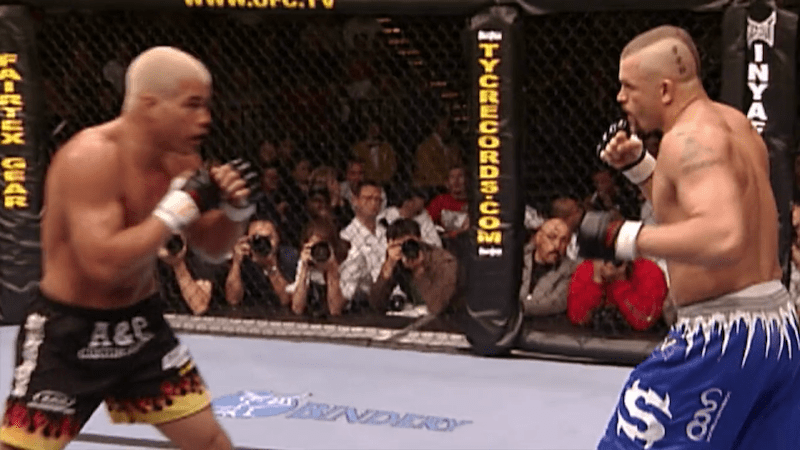 When it comes to the sport of mixed martial arts and its best-known organizing body, the UFC, Chuck Liddell and Tito Ortiz are the OGs, the same way Magic and Bird were, like Jerry Rice and Deion Sanders were, like Babe Ruth and Lou Gehrig were: Their respective sports were popular before they got there, but these outsized personalities launched their leagues into the stratosphere. And it wasn’t fueled by individual talent alone — though in all cases, that was plentiful — but by a rivalry that captured imaginations and transcended time. Ruth and Gehrig were on the same team and they didn’t even like each other.

The UFC wouldn’t be what it is today without Liddell and Ortiz. When the creators of the Ultimate Fighting Championship were starting in 1993, they seriously discussed adding a moat with sharks around the ring, or electrifying the the cage around the octagon. Given that sideshow approach, it’s no surprise the league struggled financially in its first decade, fans didn’t take it very seriously, and politicians likened the sport to “Human Cockfighting”. After Chuck and Tito, in 2016 UFC sold for $4 Billion after a purchase price in 2001 for $2 Million. (It didn’t hurt that Dana White was named president of the league the same year.)

There is obviously more to the rise of UFC than that and director Micah Brown explores this superbly in 30 for 30: Chuck and Tito. But this documentary lets the stories of these men take center stage and goes beyond the legacies they left behind. You learn what reasons these men had to keep getting up after they were repeatedly knocked down — and not just in the octagon. To understand this rivalry, you have to understand that these two were great friends who were just as unproven as the sport they participated in.

Chuck and Tito were training and sparring together to rise in the ranks. Tito had the charisma; he was the star. But he was still generous enough to help Chuck build his brand and career. Tito was the star the company could build its fortune around, while Chuck’s personality came out through his violent fighting style. Tito always ran his mouth and had no problem embracing the villain role. All Chuck knew how to do was channel that energy through his fists. If you’ve read this far, you probably know the outcome of this nearly league-mandated rivalry. But that’s only a sliver of the picture. This is an exploration of polar opposites colliding to achieve a higher goal.

These men’s bodies were practically sacrificial vehicles to the rise of their sport. This documentary isn’t nearly just a summary of the rise of these prizefighters and how they brought acceptance of the upstart UFC to the dominant realm of boxing; it’s a deconstruction of what inspired these men to even wake up in the morning.

It’s a fascinating study into someone’s identity and rising to the occasion to do better after you’ve been repeatedly knocked down. It’s a study into why you keep letting your face getting pummeled in when you know your rival is a better fighter than you and arguably worse, you don’t particularly like to fight in the first place. When all you’ve known in life is fighting, and all of a sudden it’s just over and your only comfort seems to be at the bottom of a bottle. What’s the motivation?

This is another excellent 30 for 30 because it explores the psychology of sports behind the belts, headlines and controversy. It treats these men as the humans and pioneers they are and gives them the recognition they richly deserve. Thank you Chuck and Tito for the UFC we know and love today. Hopefully all of that pain was worth it.