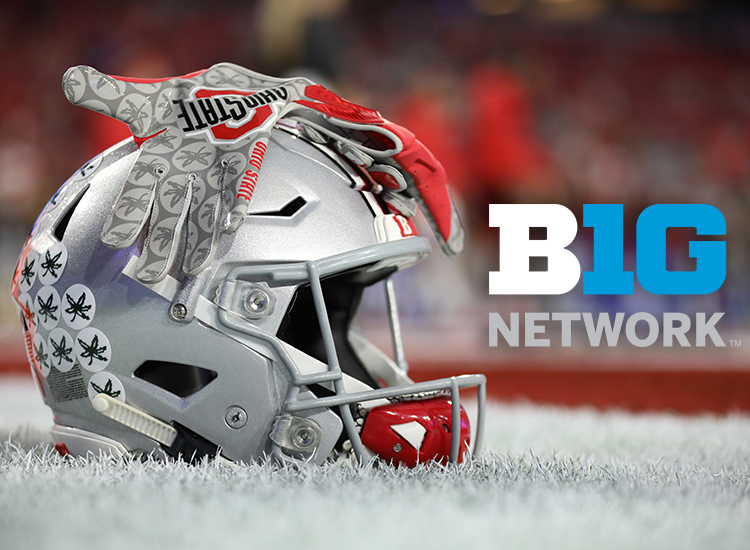 Big Ten football is back. And like the conference's best quarterbacks, you can Sling it wherever you want.

Now that the Big Ten Network is available on Sling TV, fans of the conference’s 14 teams can catch all of this season’s action live no matter where they live. Whether you’re a Rutgers fan in Iowa City or an Illinois fan in Northwestern Chicago, the Big Ten Network on Sling has the best value for all the interconference action. To get you primed for the 2020 season, here’s a look at 10 Big Ten questions as we enter a season unlike any other.

Can Ohio State return to the Playoff?

When you’ve won four of the last six Big Ten Championships, your standards are less about winning the conference than winning it all. Lead by QB and Hiesman hopeful Justin Fields, THE Ohio State University is the overwhelming favorite to win the Big Ten and presumably, if they run the table, return to the College Football Playoff. Given that they played a classic against the eventual champion Clemson last year, OSU has the talent to go all the way.

This is the perennial question and at 0-5 in his sixth (and contractually final) season, his team may need to answer in the affirmative for Harbaugh to return next year. We’ll find out when the teams face off in the final week of the season, Dec. 12.

Will they do the happy dance in Happy Valley?

With an elite defense and a new offensive coordinator — Kirk Ciarrocca, the architect behind Minnesota's breakout 2019 season — Penn State enters the top 10 alongside OSU without having played a game. But it won’t take long to decide the pecking order in the Big Ten East; the Buckeyes and Nittany Lions will face off on Halloween, just the second week of the Big Ten schedule.

Can the Gophers stay golden?

Minnesota’s 11-win season was arguably the most surprising story of the 2019 college football season. Last year had a “good for them” energy, but if returning starters like QB Tanner Morgan, WR Rashod Bateman, and cornerbacks Jordan Howden and Benjamin St-Juste can duplicate last year's success, we may have to start taking the Golden Gophers seriously as a contender in the Big Ten West.

Will Wisconsin get over the hump?

The Badgers have won the Big Ten West in four of the past six years but didn't win any of those championship games. They avoid the Buckeyes during their 8-game schedule this year, and if, beginning in Week 2, they can get through an alternating gauntlet of Nebraska-Michigan-Minnesota-Iowa, we could see them returning to the championship yet again.

After just a year with the Colorado Buffaloes, head coach Mel Tucker skipped town to replace Mark Dantonio as coach of the Spartans. Those are big shoes to fill, but if he can get past the Wolverines in Week 2, the schedule looks favorable, until a brutal back-to-back against Penn State and Ohio State to close the regular season.

Can Nebraska get back to its winning ways?

A Nebraska native, Scott Frost scored his dream job and has the opportunity to get one of the most storied college football programs turned back around. But after two seasons, Frost is just 9-15 and his team has suffered some embarrassing losses. Playing in one of the most difficult conferences in the country won't help, so if Frost — who was one of the most vocal proponents of the Big Ten playing this season — can eke out a 4-4 campaign, he deserves another year.

Can the Hoosiers continue to ball?

Another great story from last year, Indiana went 8-5 for one of their best seasons ever. Their schedule is especially tough this year but their young players will be more experienced, making Indiana a team that could play spoiler in the Big Ten East.

Who gets the Heisman hype?

Ohio State quarterback Justin Fields is the Big Ten player most likely to be a Heisman finalist (as he was last year), but he's not the only one. If Tanner Morgan can continue to improve on his 3,200 yard season, he could make the shortlist, as could whoever replaces Journey Brown at Penn State and Jonathan Taylor at Wisconsin, given those school's talent at developing running backs. But if you're laying money on anyone besides Fields, the smart choice is Penn State QB Sean Clifford, who will now be running the same offensive system that Morgan thrived under last year.

Can the conference avoid cancellations?

This is the fundamental question for both the Big Ten and the larger sports world. Unlike the ACC and SEC, there are no off-weeks built into the Big Ten schedule, so if there are outbreaks, the schools aren't likely to reschedule the games. But even with Purdue coach Jeff Brohm currently in self-isolation after testing positive for COVID-19 last weekend, Big Ten coaches and leadership remain confident that their daily testing and other safety protocols will get them through the season.

To get the Big Ten Network, subscribe to Sling Bue with Sports Extras using the link below.