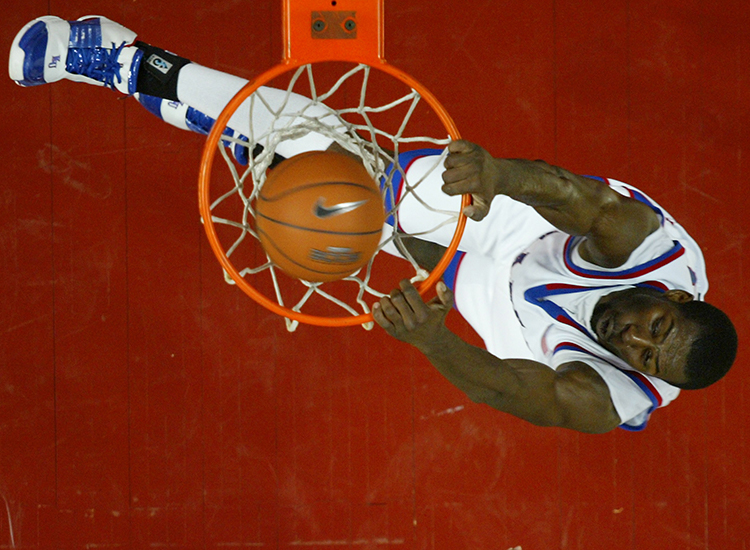 Heading into the 2020-21 college basketball season, there’s only one thing we know for sure: It will be filled with uncertainty. For instance, just two days before the opening tip of the Empire Classic, #2 Baylor withdrew from the event following a positive COVID-19 test from coach Scott Drew (Rhode Island will face #18 Arizona State instead). So fans of college hoops will just have to roll with the punches this season.

They’re used to it. After all, the 2020 NCAA Men’s and Women’s Basketball tournaments were among the first sports casualties of the coronavirus pandemic, which made for a lot of guesswork and finger-crossing in last week’s NBA Draft. With the NCAA missing out on about $375 million in revenue after cancelling March Madness, they’ll do all they can to make next year’s tournament happen, but don’t plan on the regular season schedule playing out as it’s currently written (don't plan on attending any games either).

With that said, there’s a ton to get excited about, in no small part because last season ended so anticlimactically. Many of college's top NBA prospects opted to remain in school, making this season particularly rich in star power. And the fog of uncertainty has made the prospect of prognostication even more difficult, resulting in a field of contenders that feels as wide open as it ever has.

Here’s a look at the top storylines as we head into a college basketball season unlike any other. To get the most college hoops on Sling, subscribe to the Sports Extra pack using the link at the bottom of this page.

As Andy Katz says in the video above, had there been an NCAA tournament last March, at least 10 schools from the Big Ten would have made it. The conference is similarly stacked this year, with at least four teams in position to make it all the way to the Final Four in Indianapolis. Along with perennial contender Michigan State, these teams include Iowa, Wisconsin, and Illinois, which hasn’t made the NCAA tournament since 2013. With the Big Ten planning to play a 20-game league schedule with up to seven non-conference games, teams will have plenty of time to establish a pecking order, and if iron sharpens iron, don’t be surprised if one (or more) schools from the Big Ten makes a deep run in the tournament.

The Big Ten begins its conference schedule on Dec. 13; follow this link for a complete list of games.

Leader of the PAC?

The PAC-12 is difficult to pin down, but most experts believe that this year’s top teams are the UCLA Bruins and Arizona State Sun Devils. Their histories could not be more different. Although they haven’t made the Final Four since 2008, UCLA is one of the most storied programs in the history of college basketball. Second year coach Mick Cronin brings back basically his entire team from last year, along with Kentucky transfer Johnny Juzang. Recent history has not been kind to the Bruins, but their experience and depth could bolster their chances this year.

Arizona State, on the other hand, has never even been to a Final Four. Led by spirited point guard Remy Martin (who was named an AP preseason All-American), the Sun Devils got even better this offseason with the addition of McDonald’s All-American Josh Christopher. Between their established talent and a handful of promising newcomers, ASU is poised for their best season in the program’s history.

Players to Watch For

However, there was only one unanimous selection to the preseason All-American team: Iowa big man Luka Garza. In his Junior season last year, Garza emerged as one of the most unstoppable players in college basketball. Averaging a shade under 24 points and 10 boards per game, Garza finished second in player of the year voting behind Dayton’s Obi Toppin. Although there are always new players who make a splash, Garza is the odds-on favorite to take home the Naismith Award this year.

Who will play Cinderella at the big dance?

The surprise teams who seem to come out of nowhere to make a run in the NCAA Tournament are a big part of what makes college basketball so fun and exciting. The Athletic polled their college basketball writers about this year’s Cinderella team and the majority said the Richmond Spiders. As Kyle Tucker points out, “the Spiders have basically everybody back from a 24-7 season,” making them an intriguing pick to make some noise this Spring.

Of course, all the most pressing questions about this season have to do with COVID. The length of the schedule provides more flexibility for postponements than their counterparts in college football, but with the recent spike in coronavirus cases across the country, it’s not clear what we’ll be facing over the next few months.

Last week, the NCAA announced it would be relocating the tournament’s 13 preliminary round sites, saying that, “conducting the championship at 13 preliminary round sites spread throughout the country would be very difficult to execute in the current pandemic environment.” Instead, the NCAA is in talks with “the State of Indiana and the city of Indianapolis [the site of the Final Four] to potentially host the 68-team tournament around the metropolitan area during the coordinated dates in March and April.” Nothing official has been announced.

The schedule itself remains unchanged: Selection Sunday will take place on March 14 to determine the 68-team field. First Four games are on March 16-17, followed by the First and Second Rounds March 18-21. March 25-28 is the Sweet 16 and Elite Eight rounds. The Final Four will play on April 3 and the National Championship takes place April 5.

Although we may not know much about the tournament to end the season, at least the beginning is here. In 2020, that's reason enough to get excited.

Use the link below to get Sling Orange + Blue with Sports Extra for the most college basketball on Sling!