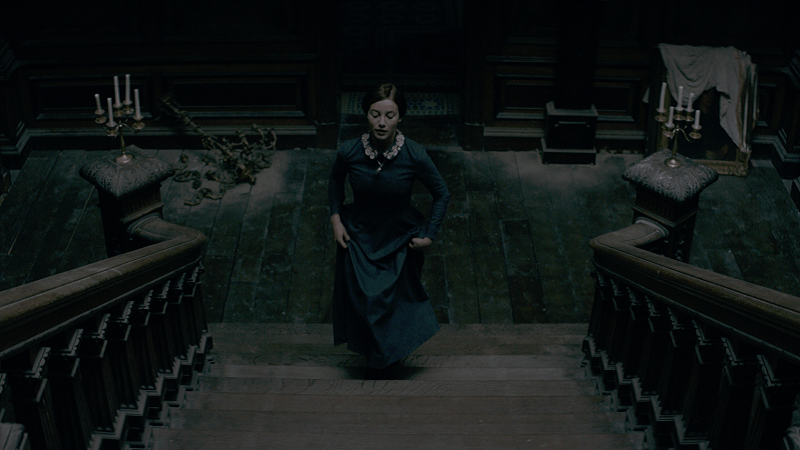 You don’t need to be an English major to thoroughly enjoy The Lodgers, but it certainly makes the experience a bit more exciting.

Dripping with textbook Gothic motifs, The Lodgers pays homage to the greats of the genre, specifically Henry James, Edgar Allan Poe, and Ann Radcliffe. The filmmaker’s admiration is explicit; in one scene, a character even recites Poe’s poem “The Lake,” echoing another recital that occurs in The Fall of the House of Usher. Such novelistic films are rare, endlessly analyzable treats, and audiences expecting a less ambitious horror film might be in for a quiet surprise.

Charlotte Vega (a talented British-Spanish actress on the cusp of international stardom) plays the film’s persecuted heroine, Rachel, who lives in a requisitely decrepit mansion alone with her near-identical twin brother, Edward. In the wake of the fateful drowning of their parents in the lake beside the estate many years prior, three rules govern the lives of the young siblings: “Be in bed by midnight’s bell; never let a stranger through your door;” and “never leave each other all alone,” but, on the eve of their eighteenth birthday, Rachel breaks the first of these edicts. Vega shines in the multi-layered, psychologically guarded role that, in Radcliffe fashion, can be interpreted without emphasis on the story’s seemingly supernatural elements.

As Rachel’s brother Edward, Bill Milner (X-Men: First Class) inhabits a Roderick Usher-esque character, both of them being sickly hypersensitives unnervingly preoccupied with their sisters. But Edward meets a challenger for Rachel’s attention in Sean (Eugene Simon, most recognizable as Lancel Lannister in Game of Thrones), a wounded soldier who intrudes on the twins’ seclusion. Rachel’s conflicting interactions with Edward and Sean reveal the burgeoning agency of her adulthood, and the ambiguity of events transpiring between each possible pair within the trio is as fascinating as it is frightful.

Meanwhile, the precarious financial state of Rachel’s and Edward’s family home grows ever more dire. Best known for his turns as Walder Frey in Game of Thrones and Argus Filch in the Harry Potter films, David Bradley appears as a solicitor who comes to warn the twins of their trust’s nearly exhausted funds. With Dickensian lechery, Bradley’s scenes intensify the air of entrapment surrounding Rachel, which is as vital an aspect of the film’s Gothic setting as the crumbling manor in which most of the tale unfolds.

Set in rural Ireland around the War of Independence and beautifully shot in hauntingly dark interiors and a lush-yet-menacing lakeside forest, the scenery of The Lodgers brings to mind James’s The Turn of the Screw and its many adaptations. Furthermore, Rachel’s repeated visions of her parents emerging out of the water closely mirror the memorable lake scene from the novella. In less capable hands, this detailed regard for literary predecessors could veer toward pedantic, but the briskness of the plot and the quality of the performances keep The Lodgers on course.

A thoughtful, gorgeous film, The Lodgers demonstrates how a truly great horror film, like a truly great Gothic novel, explores the real and monstrous capabilities of human nature, which are infinitely more terrifying and enduring than any monster we may imagine.