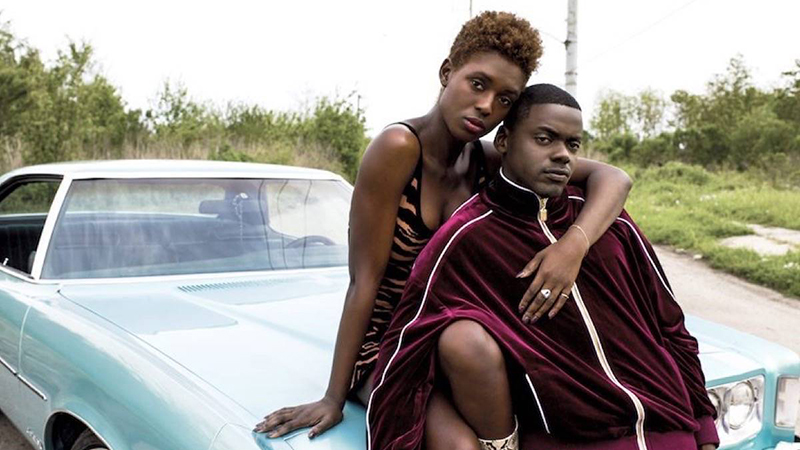 I’m wondering how Queen & Slim flew so far under the radar. It was a movie that many spoke loudly about wanting to see, but it came and went from theaters fairly quickly (although it actually did pretty well at the box office, grossing over $46 million on a budget of $17-20 million). Regardless, Queen & Slim is a thought-provoking story and lucky for you, it’s now available to rent on Sling.

What should be a harmless night turns quickly into a dangerous one, when Queen (Jodie Turner-Smith) and Slim (Daniel Kaluuya) match on Tinder and meet for a dinner date. But driving Queen home, Slim gets pulled over; as people of color, the routine stop goes awry because of a power-tripping policeman. They wind up shooting the officer in self-defense, and are forced to flee the scene.

Thus begins their on-the-run escape across the U.S., as they head for New Orleans where Queen’s uncle can provide temporary housing. The couple encounters more than a few bumps in the road but they also begin to pick up support from people across the country following the case. Their goal is to eventually flee to Cuba, but it’s not an easy plan to execute.

The film received generally positive reviews and there’s no denying the strong performances from Daniel Kaluuya and Jodie Turner-Smith. Interestingly, the screenplay was written by Lena Waithe, the up-and-coming actress, producer, and writer best known for her role as Denise in Master of None. It was also the directorial debut for Melina Matsoukas, who’s best known for her work on memorable music videos like Beyonce’s “Formation” and Rihanna’s “We Found Love.”

Ultimately, Queen & Slim is a thinkpiece on perspectives and preconceptions. While the system is quick to paint the couple as criminals, they also gain a large following that cheers them on during their escape. Queen and Slim are painfully aware of their predicament: as a young black couple involved in a police shooting, they know the system is stacked against them, even if it happened in self-defense. It’s a sad indictment of our criminal justice system that they quickly realize their best option is go on the run.

I’ll be the first to admit this movie was not what I expected, but not necessarily in a bad way. After watching with friends, we ended up discussing it for a long while after, which is usually a sign of a successful film. You can have your own discussions too, after watching Queen & Slim on Sling this week.

Queen & Slim is now available to rent for a one-time purchase of $5.99.

Other new movies now available:
Frozen 2
El Coyote
Nesting Dolls
Rag Doll
Homeward
The Extraordinary Journey of the Fakir
The Light of Hope
We Only Know So Much