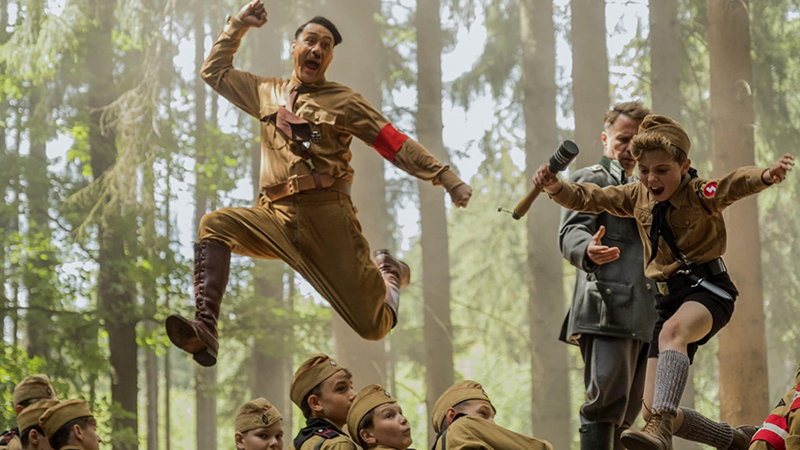 It took me a long time to eventually watch JoJo Rabbit. My general apprehension towards comedy involving Nazis left me less than thrilled to give this a try. But once I did — and once I acknowledged just how comedically satirical this film was — I wondered why I ever hesitated. I experienced a roller coaster of emotions: mostly laughs, some nerves, and even a few happy tears.

Johannes “JoJo” Betzler is your average Nazi German boy during World War II: He’s young and naive but has an undying love for the Nazi party and an imaginary friend by the name of Adolf Hitler. He’s involved in Hitler youth training camps and makes bold attempts to confirm his fascist passion, like throwing a live hand grenade, which leaves him severely injured. Things get complicated when he discovers his mom is hiding a young Jewish girl, Elsa, in their attic. JoJo is torn because if he turns her in, he’s all but guaranteed his mother’s death.

Realizing this isn’t an option, he at least attempts to take advantage of the situation, as Elsa can provide (hilariously fake) details for the tell-all book about Jews he’s writing. As he learns more about her, a friendship quickly blossoms, but because this is still Nazi Germany, everything JoJo stood for, or thought he stood for, is now being tested. At least Captain Klenzendorf (a great Sam Rockwell) loves his book though, right?

It definitely won’t be everyone’s cup of tea, but those who enjoy dark absurdist humor won’t be disappointed. Beyond injecting Thor with a much-needed sense of humor in Thor: Ragnarok, director Taika Waititi is perhaps best known for What We Do in the Shadows, a 2014 vampire mockumentary which was later turned into a television show. Fans of Waititi can expect a similar style of humor: dry, a little farcical, but still hilarious.

JoJo Rabbit has quite the cast, including Rockwell, Scarlett Johansson (JoJo’s kind mother Rosie), Rebel Wilson (Fraulein Rahm), and Alfie Allen (Finkel). In his breakout role, JoJo is played by Roman Griffin Davis, who was just 11-years-old during filming. And pulling double duty, Waititi also gives a brilliant performance as Hitler, or rather, JoJo’s imaginary version of him.

The film scored six Oscar nominations including Best Picture, and Waititi even took home the award for Best Adapted Screenplay (it’s based off a book called Caging Skies). Silly, satirical, and at times slightly disturbing, JoJo Rabbit is a dark comedy not to be missed.

JoJo Rabbit is now available to rent for a one-time purchase of $5.99.