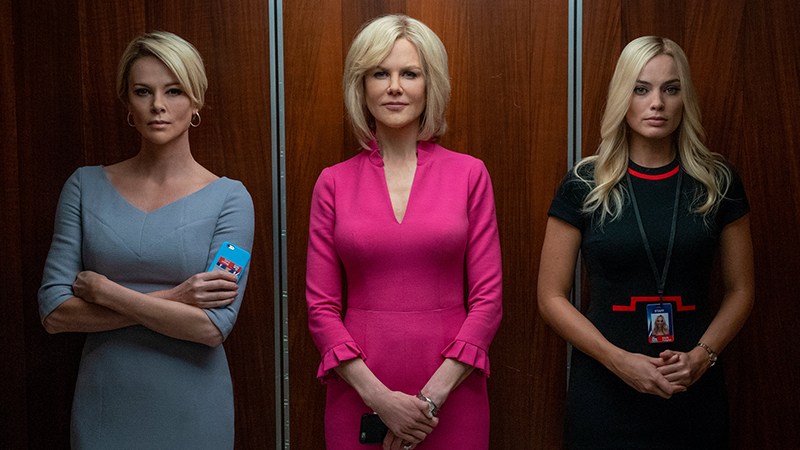 One of the most talked-about movies of the end of the year, Bombshell tells the story of the women at Fox News who were repeatedly subjected to sexual harassment, starting at the top with former CEO Roger Ailes. These women – most notably Megyn Kelly – were faced with the lose-lose proposition of speaking out and risking their careers or staying quiet and maintaining the status quo. As such, Bombshell is a refreshing and eye-opening take on abuse in the workplace.

Although it features both real and composite characters, the film shows the rise and fall of some of Fox’s biggest anchorwomen. Faced with entirely different challenges than their male counterparts, these women must decide whether the harassment — and even outright abuse — they’re subjected to is worth enduring. Anchorwoman Gretchen Carlson is the first to put her foot down, but she knows she needs more support and traction, especially from Megyn Kelly, if she’s going to take down the mighty Roger Ailes.

While Carlson and Kelly are already well into their careers, there are inexperienced staffers with a lot more at risk. These include Kayla Pospisil, a composite character, who suffers through a traumatic meeting with Ailes in which he commands her to lift her skirt up and do the “spin” (an audition tactic that Ailes allegedly made women do in real-life). At first, Kayla believes this is simply the cost of making it in an ultra-competitive industry, but as the inappropriate behavior continues, she isn’t so sure. Pospisil is soon faced with the difficult decision of whether or not to keep chasing her dreams, no matter the cost.

Although I enjoyed the sentiment of the film overall, I also felt a bit conflicted. While it was extremely courageous of these women to finally take a stand, their silence helped the network’s culture of rampant sexism to flourish in the first place. By waiting until it personally affected them to speak out, it almost felt like bad guys taking down worse guys. While this doesn’t minimize what these women went through, it diminishes the satisfaction of seeing Ailes get what he deserves (he was forced to resign in 2016 and died the following year).

No matter how you feel about this story, it shouldn’t stop you from giving it a go. It received favorable reviews from critics (70% on Rotten Tomatoes), and audiences also left generally satisfied. And despite the qualms above, it ultimately achieves its ambitions of being a feel-good, empowering film. With strong performances from the entire cast and a topic that couldn’t be more timely, Bombshell is a must-watch.

Bombshell is now available to rent for a one-time purchase of $5.99.

Other new movies now Available:
Charlie’s Angels (2019)
Spies in Disguise
Don’t Speak
Exit 0
Hoaxed
I Am Human
I Hate the Man in My Basement
Radical Age
Shepard
Stuffed
Temblores (Tremord)
The Adventure of A.R.I.: My Robot Friend
The Wolf Hour
There Are No Fakes
Transference