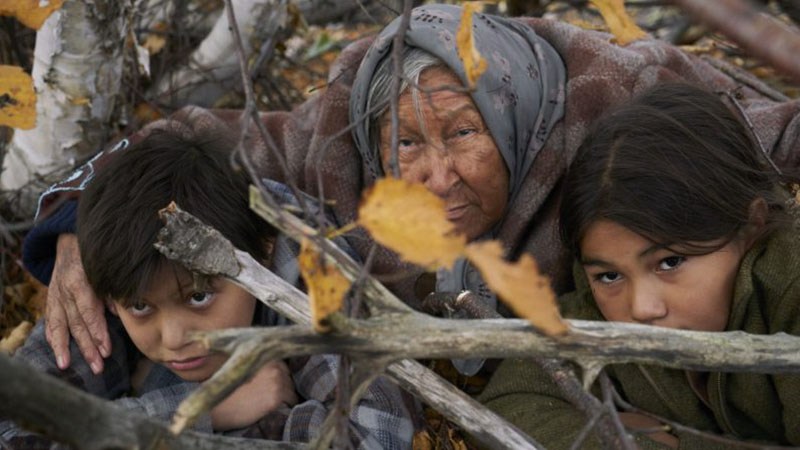 Indian Horse is a raw portrayal of a very real, very sad practice that once took place throughout Canada. The film opens with the following fact: “In the early 1800s the Canadian government took action to control all aspects of life for Indigenous Peoples. These policies allowed the government to forcibly remove Indigenous children from their families. The children were isolated in church-run Residential Schools designed to destroy their traditions and assimilate them into the dominant Canadian culture.”

As you may have guessed, the film follows the challenges that Indigenous People endured while living in Canada during this time. The film is an adaptation of the novel Indian Horse by Ojibwe author Richard Wagamese, who said that the book took much longer to write than expected because of the emotional weight it carried. At times distressing and disturbing, it’s an eye-opening film about a lesser-known moment in history that many textbooks left out.

Salden Peltier, Forrest Goodluck, and Ajuwak Kapashesit all play the main character Saul in various stages of his life (as a child, teen, and adult, respectively). Growing up in Canada as a member of the First Nations, Saul is taken to a residential school and forced to assimilate after his grandmother dies. Saul encounters abusive and unforgiving authority figures, but he is able to uncover a passion for hockey. Eventually, Saul gets the chance to move to another town to pursue hockey more competitively, but the trauma he’s endured isn’t so quick to disappear.

Although this film might not be funny or lighthearted, it’s worth seeing because it shows us a slice of history that I had never heard of. The frustration Saul feels throughout the film is palpable, and the trauma he endures is heartbreaking. Peltier is the best of the three Sauls and part of what makes his performance so superb is the fact that he had no prior acting experience; Peltier was discovered for the role after a casting call went out for an indigenous boy who played hockey. He did a fantastic job with the role, making it easy to empathize with Saul through his struggles.

Throughout the film, we’re rooting for Saul’s success, even if it doesn’t come easily. It seems that for every hurdle he clears, there’s another one waiting for him. Indian Horse is an honest portrayal of the nonlinear path to surviving trauma. While it isn’t an easy watch, it is an essential watch.

Indian Horse is now available now for a one-time purchase of $5.99.