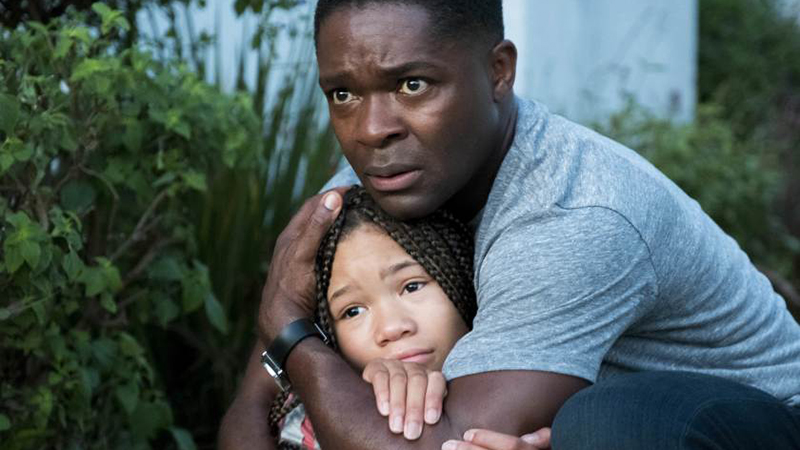 Watching almost any movie, viewers will need to employ a suspension of disbelief. In case you failed English class or need a refresher, that’s when you ignore or overlook unbelievable elements of a film (characters, plot line, etc.) so that you can still enjoy it. With Don’t Let Go, you might need to completely cut off your sense of disbelief if you want to be entertained. Nonetheless, it’s a satisfying thriller.

Starring David Oyelowo and Stormy Reid, Don’t Let Go is a suspense film that keeps audiences on the edge of their seats throughout. Ashley (Reid) is a young girl whose father has a troubled past. This past comes back to haunt them when he is seemingly pushed over the edge and perpetrates a murder-suicide on his family. But things get strange when Ashley’s uncle Jack (Oyelowo), starts receiving calls from Ashley from beyond the grave. Jack realizes by acting now in the present, he can control and reverse actions in the past, and he’s willing to do whatever it takes to save his niece.

So what do you do when your dead niece calls you? Apparently, you let it ring and ignore it, desperately try to call it back, and act surprised when you get a disconnected signal. Luckily for Jack, he eventually gets a hold of her, and he’s tasked with helping past-Ashley so she can save herself. It takes a few trial runs, though, which start to warp the past and present (or whatever alternate reality is created as a result). Don’t forget that suspension of disbelief.

Sure, it’s a little cheesy at times, but Don’t Let Go has some entertaining action. What really helps here is the strong cast behind the story. I love Stormy Reid from Euphoria (she plays Zendaya’s character’s sister). Reid nails the innocent and scared teenager part well, and she has a promising career ahead of her. David Oyelowo (Selma) doesn’t disappoint either. His performance packs just the right punch of slightly over-the-top energy for the material. The cast is filled out by Brian Tyree Henry (Atlanta) as Ashley’s dad, and Mykelti Williamson (Forrest Gump) as Jack’s detective partner.

Aside from the time-traveling action, there’s also a pretty solid plot twist, making for quite the dramatic ending. I’m not the typical action moviegoer, so maybe I’m just not accustomed to this level of sensationalized suspense. But that didn’t prevent me from indulging, and it shouldn’t stop you.

Don’t Let Go is now available to rent for a one-time purchase of $5.99.