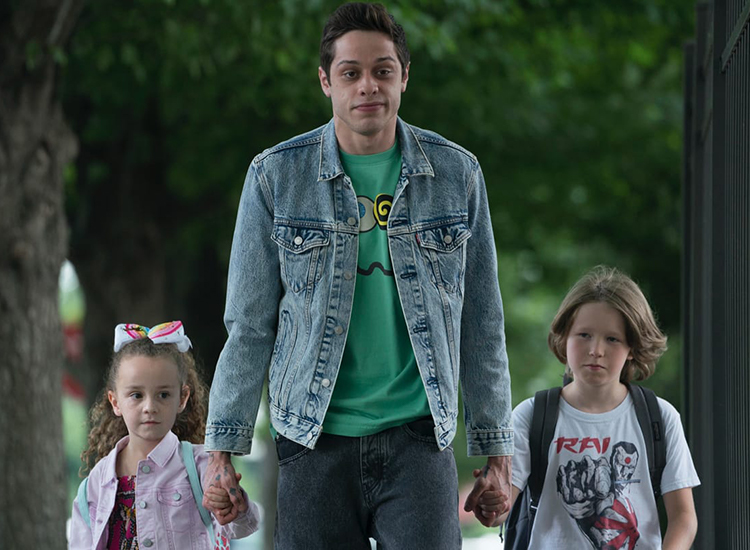 Almost every Judd Apatow movie has the same basic log line: A man-child’s search for meaning. Even dating back to his earliest days as a writer/ director/ producer on shows like Freaks and Geeks and Undeclared, Apatow has explored the transitional period where young men — and sometimes women — put away their toys (literally in the case of The 40-Year-Old Virgin) and finally grow up.

But even if most of his movies follow a similar formula and themes, they usually land somewhere between “Good” and “Classic.” His latest film, The King of Staten Island, is closer to the former than latter on that scale. However, if you're a fan of Apatow films like Knocked Up or of Pete Davidson — who stars in and co-wrote The King of Staten Island — you’ll find plenty to like here.

Inspired by his real life, Davidson stars as Scott, a 24-year-old aspiring tattoo artist who’s never gotten over the death of his firefighter father (as you probably know by now, Davidson’s own dad was a fireman who was killed in the 9/11 attacks). Scott deals with his unresolved trauma by popping an assortment of pharmaceuticals, smoking a ton of weed, and alienating everyone around him, save for his crew of homies and his patient mother (a perfectly cast Marisa Tomie). But after his little sister (Maude Apatow) leaves for college and his mother meets a new man who is also a firefighter (Bill Burr), Scott is finally forced to face the music.

Suffused with Davidson’s dark sense of humor and subject matter that includes mental illness and unreconciled grief, The King of Staten Island is easily Apatow’s heaviest film to date. But for all of its dramatic moments, this is still a movie that features many of his comedic hallmarks: Groups of guys hanging out smoking pot and busting on each other; naturalistic dialogue that grounds the characters in believability; and several oh-no-they-didn’t laugh out loud moments.

Davidson plays Scott as someone who is both pitiable and frustratingly selfish, bringing a fresh, fearless edge to Apatow’s tried-and-true cinematic formula. Given that the movie’s general outline is similar to Davidson’s own biography in terms of his father’s death, his mental health struggles, and his unabashed love of marijuana, one can’t help but wonder if making the film was his way of working through and owning up to his own issues. Regardless, Davidson completely sells the dramatic elements, and does a nice job of riding out Scott’s carousel of emotions.

Yet the movie is as much Apatow’s as Davidson’s. At this stage of his career, we all know what to expect from his brand of comedy, for better and for worse (with a two-hour plus runtime, he still hasn’t figured out how to keep his movies from dragging). The King of Staten Island may not be a crowning achievement, but with a good balance between the serious and the silly, it’s a lot like its protagonist: A step forward in the right direction.

The King of Staten Island is now available as an early release rental for a one-time purchase of $19.99.