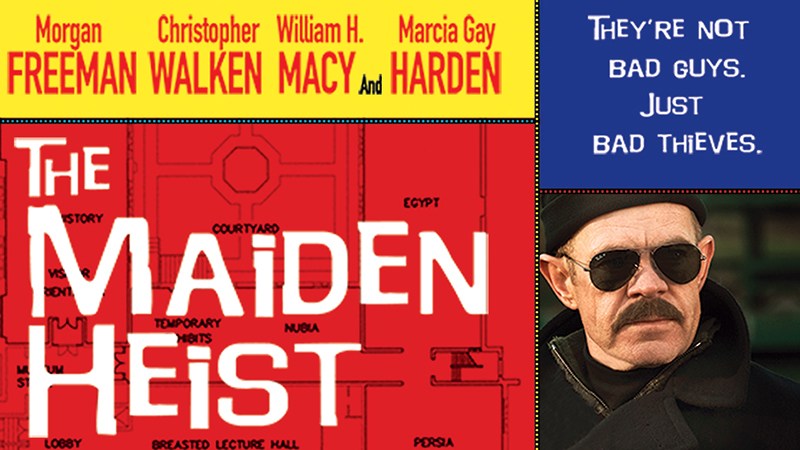 Sling TV has partnered with Blockbuster for Flashback Friday Free Movie Night, where we’re offering free movies through the Sling TV app on Roku, Amazon and Android devices, or through the Sling website. This week is the star-studded 2009 crime comedy The Maiden Heist. Follow this link to watch, no credit card required, no late fees!

Heist movies are inherently formulaic (maybe that’s why Rick Sanchez hates them so much). There’s the score, the crew, the plan, the complication, and ultimately, the satisfaction of success. But part of what makes the genre so enduring is that there’s a lot of wiggle room within that structure.

The Maiden Heist — this week’s pick for Blockbuster Flashback Friday Free Movie Night — is an exceedingly genial crime movie. Starring Christopher Walken, Morgan Freeman, and William H. Macy, the movie opens with Walken’s character Roger, an aging security guard at an art museum, engaging in a full-on fire fight with bandits gunning for his favorite painting. But we quickly realize this gunfight is nothing more than a symptom of Roger’s imagination, a clever bit of misdirection that establishes both his intense connection to the painting as well as the low-stakes tone of this particular caper.

When the museum’s curator decides to sell the collection to a museum in Denmark, Roger teams with fellow security guards and passionate art-lovers Charles (Morgan Freeman) and George (William H. Macy) to intercept the shipment of their favorite works and add them to their private collection. All three actors stay in their lane — Walken is weird, Freeman is charming, Macy is pathetic — but it’s fun to see heavyweight actors with eight Oscar nominations between them taking on lighter material.

Keeping the stakes low helps The Maiden Heist distinguish itself from traditional, violent heist movies. It may follow a formula, but like the actors in the movie, that familiarity ultimately breeds comfort.