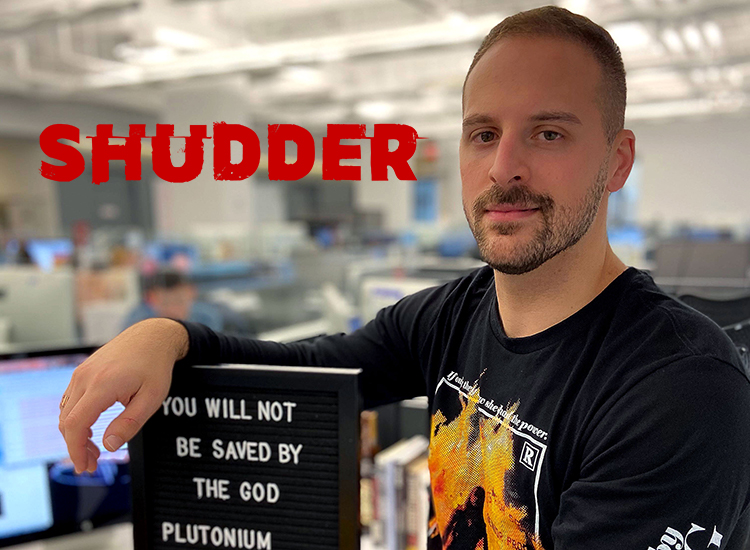 Once considered a niche genre that operated around the outer edges of traditional Hollywood respectability, horror has undergone a critical and cultural reappraisal in recent years. Some of that has to do with a new generation of filmmakers who are bringing a more artful style to the genre. But there has also been a broader reexamination of the function of horror films, a shift away from the lingering notion that the form is inherently superficial.

The horror streaming service Shudder has certainly played a role in this reassessment. With a library that includes both touchstones like The Texas Chainsaw Massacre and Halloween along with overlooked gems, documentaries, and original films and series, Shudder has played a vital role in the modern horror renaissance.

With Shudder having recently launched as a premium add-on on Sling, we hopped on a Zoom call with their curator Samuel Zimmerman to discuss everything from his curation strategy to new Shudder originals like the comprehensive ‘80s horror documentary In Search of Darkness and Host, which currently sits at 100% on Rotten Tomatoes, topping their list of the best horror films of 2020. Check out our interview below and follow this link to add Shudder to your Sling TV package. Note: This Q&A has been edited and condensed for clarity.

Sling: You have one of the coolest, most unique jobs I can think of. I guess the obvious first question is, how awesome is your life?

Sling: How did you first get into horror?

SZ: It happened when I was a kid. There was something about weird stuff and ghastly stuff, creepy stuff that I was definitely drawn to. There wasn’t one movie, there were a lot of movies and books and luckily [I had] a lot of family who weren’t super into horror, but cared that I was, which was really nice. We were at a video store and they had Night of the Living Dead on sale and [my dad] was like, “You should see this anyway, it’s a classic” so he bought it for me. And we rented American Werewolf in London together and we rented The Shining together. And then my grandmother bought me Psycho. So just the people around me going, ‘Here are the essentials’, even if they weren’t archivists or collectors or big fans. It was cool that they really fed into what I cared about and then it just grew from there.

It taught me one of those weird things about movies and horror movies in general, which is, they affect people in really fun ways. My mom and dad, they’re not big horror fans but they have very specific horror memories. My mom, she hates horror, but she was like, "I will never forget seeing The Texas Chainsaw Massacre." And that makes an impression on you. You’re like, ‘Now I have to see it, because it made this insane impression on my mother so many years ago, and she still remembers it and still thinks about it.

Then it grew into the weird phase of becoming a horror fan where you now have to find stuff on your own. And I think Scream was a big part of that, because if you were young when Scream came out, not only was it a great movie but one of the things I love about it, it acted as a text for you, because it had so many references. So I would watch it and go, ‘OK, now I need to see The Howling’ or ‘Now I need to see The Town That Dreaded Sundown’ because that sounds cool and that’s a weird long title.

Sling: Let’s talk about In Search of Darkness. It’s an absolutely epic, four-hour documentary about '80s horror, featuring tons of movies I’ve never heard of. Can you talk a little bit about the scope of it, because it’s such an ambitious film.

SZ: I think one of the things that’s exciting, and really the impetus behind it, was to share the love and understanding of this genre, but also that the ‘80s was a turning point, and a defining era for horror. It has its own feel, it has its own energy, and I think they wanted to figure out why that is. There’s so many creators. And then I think it intersects a lot with fan culture and that continued rise: I love this thing, I’m loyal to this thing, I care about this thing, I know the creators.

Maybe only in that decade could Tom Savini, as a makeup effects artist, become his own sort of rockstar, go on Letterman and share this stuff. So I think they really wanted to investigate not only do we love it — we do — but why do we love it, and what was it about this that inspired all those feelings in us?

Sling: Do you have any thoughts on the push-and-pull between culture, technology, and horror in that particular era? In Search of Darkness provides a ton of context about the changes at the time, from the video stores to the technical advances made by special effects artists like Rick Baker, and the impact of 3-D.

SZ: I’m glad you brought up video stores, because I think that’s a really big inflection point: The rise of video stores, the rise of home video as something you could rent and bring home. It’s one of those things that made movies more accessible, so much more available to not just watch but rewatch, which is also what I think inspires fandom. You know, picking apart the things you love, finding the moments that you love, the things you love that you latch onto, that you relate to.

But it also opened up so many different levels of filmmaking. In the ‘80s, the video market allowed for movies to be made just for video. You see that from maybe higher budgeted things, but then that’s where the Troma’s, the Full Moon’s, the Empire’s come in. That’s where shot-on-video horror comes in, which is maybe a little bit more obscure, but at the same time has a fanbase, has real weird passion and earnestness to it.

But you look back and you see within ‘80s horror, so many contrasting and conflicting viewpoints. It ended up being rich because so much was going on and so many filmmakers had points of view they wanted to express through this. Why do we keep returning to John Carpenter? He’s the main man for inputting rich themes in genre, weird, off-beat cinema.

Sling: I have to think you’ve seen everything in this movie. What “deep cuts” would you recommend for horror fans that they may not have seen?

SZ: Maybe one of my favorite horror movies of the ‘80s, is Dan O’Bannon’s Dead and Buried. Dan O’Bannon wrote it, Gary Sherman directed it. I think it’s probably the most underrated straight-up horror movie of the ‘80s. It is freaky and strange. It’s about a town where people return to life and act differently. It’s not exactly a zombie movie; it’s something a bit more off-beat, a bit more rich, a bit creepier. I really, really love it. And it has one of the great endings of ‘80s horror.

Sling: In terms of new movies, there’s also Host, which was shot entirely in quarantine. Tell us about that one and how did it come together so quickly?

SZ: Host is written and directed by a really special filmmaker named Rob Savage. Rob made a short film at the beginning of this entire lockdown which got a lot of fanfare on Twitter. And I had known Rob for a little while, so right after he made that, he sent it to the Shudder team and we were like, "What else can we do with this? Where else do we go from here because you have a lot of bubbling creative energy and we want to do something fun and scary." And Rob said, "OK I have this idea and all of the actors who were in that short are in this house, they’re quarantining. I think we can do this and I think I’ll direct remotely. And we’re gonna make something really special.”

And they did. They turned in this amazing movie about a group of friends who are hanging out on Zoom, and to spice things up, they hold a seance and, of course, something crosses over. And it’s scary and it’s fun and it’s creepy and it’s urgent. It has some stuff you weren’t expecting, it scares you in a lot of different ways. It’s not just a jump [scare], there are these moments where you’re sort of going “What. Is. That?” That makes you uncomfortable for now and it’s gonna set you up to be freaked out in a bigger way later. It’s really cool and from idea to production to finished product, [it was only] a three month process.

Sling: Can you talk a little bit about what you look for in the curation process, in terms of trying to curate horror styles that might be different from your tastes?

SZ: I think you hit a really interesting point: I have to exist at this point where I’m not just programming and curating for myself, because then I wouldn’t be doing a very good job. But I need to find some sort of standard, or quality, that brings a subgenre or movie that may not be exactly to my taste, but is contextually worthy of being on Shudder.

Not everyone who subscribes to Shudder is going to like every movie on Shudder. That’s not realistic, right? What I hope is that if someone watches something and decides that they weren’t into it, they look at it and go, “But I get why it’s on here. I get what it has to offer. I get that it maybe did something different in this subgenre that I’m not totally onboard with, but whoever is will appreciate it.” And that’s what I’m really trying to seek out and find.

Sling: In recent years, thanks to filmmakers like Ari Aster, Jennifer Kent, and Robert Eggers, it feels like horror is moving in a more artistic direction. What are your thoughts on the diversification of the horror genre overall?

SZ: The short answer is that it’s great because you’re going to find the most interesting perspectives...often times in voices that maybe have been historically underrepresented in the genre, or folks who haven’t made something yet, they’re young and hungry, it’s their first film and they’re going to do something weird and exciting.

But I also think we’re in a moment [where] we’ve moved away from one type of horror dominating, and I think that’s a good thing. Even 15 years ago, a movie would come out and be a hit, and you’d see a lot of movies copy that. But there really isn’t just one type of thing anymore. And that’s what’s cool, that’s what’s bringing all these new and interesting voices, new and interesting types of movies. Midsommar is as different as The Invisible Man as Impetigore—which we just released on Shudder—as The Beach House. There’s a lot of different kinds of voices and different kinds of movies being made and that’s what’s really cool.