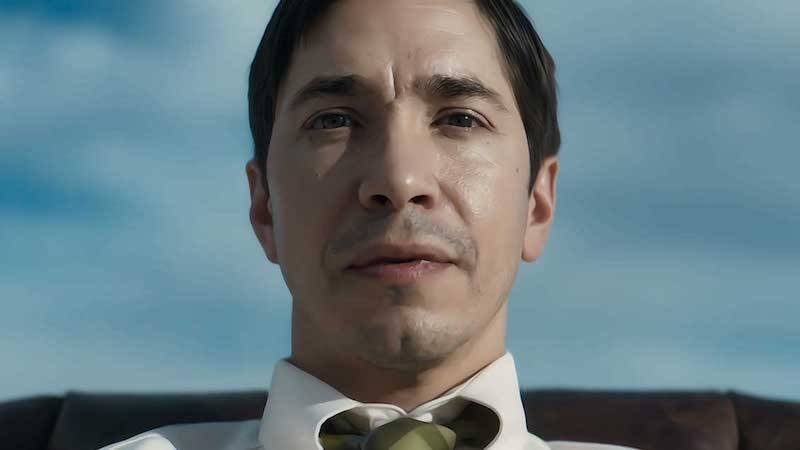 When you take drugs, where do the drugs take you?

That question is at the center of many drug movies, from Harold and Kumar to Easy Rider (this could also explain the episodic, roaming structure of drug movies as well). The new Justin Long movie The Wave — in which Long plays an ambitious lawyer who inadvertently ends up on an epic psychedelic journey — certainly falls into this category. However, the movie is also suffused with subtle social commentary and a dash of sci-fi fantasy. It’s a trip, in the broadest sense of the word.

“I loved the message of selflessness and I thought it was a really beautiful idea hidden within this fun, trippy, weird journey this guy goes on,” Long said in a recent interview when asked what attracted him to this project. “It was also a challenge to keep the stakes so high throughout so much of the movie. Usually, it crests at a certain point, whatever a character’s going through in terms of the stakes and the drama but this just seemed like it was at such a high level throughout the story. And it’s something I don’t get to do that often.”

Speaking with Long, it’s clear that The Wave was an exciting opportunity to step outside of his comfort zone. Much of the movie consists of Long’s character Frank attempting to not betray his drug-addled mind state. Long said his technique was inspired by our own behavior when we’ve had too much.

“When you’re really drunk, you try to act as though you’re not, so you over-enunciate instead of slurring,” Long said. “Drunk people will try extra hard to come across as being sober so they’ll have an exaggerated way of speaking in order to accomplish that. So it was a fun thing to play with.”

Although The Wave feels like something of a departure from his past work, in his own life, Long has always been candid about his experiences with drugs, both positive and negative.

“It’s something that I could relate to,” Long said of the movie’s relatively complex portrayal of the psychedelic experience. “I’ve had experiences with being dosed, and I was given a drug that I thought was weed and it turned out to be [most likely] PCP. So I had an experience with that where I wasn’t in control of my body, I was really freaking out around strangers. It’s a scary thing and it’s something that, in a very minimal way, I could relate to.”

Still, The Wave isn’t preachy or judgmental about drugs. If anything, the film ultimately suggests that these types of mind-altering experiences can lead to a positive change in perspective.

“My interpretation was that this drug allowed [Frank] to open up his mind, like certain drugs do, to an ayahuasca-type experience, where he was able to see certain things that he hadn’t seen before,” Long explained. “He was able to see clearly the inherent immorality of the job he was doing and the human effect it was having on people. He was able to humanize the case he was working on in a way that he hadn’t been able to before. So I like that idea too, I like the message behind an epiphany like that; that we have to have compassion for people. They’re not just numbers, they’re not just names on a spreadsheet.”

The need for compassion and understanding is a theme that Long finds himself coming back to, in his art as well as new podcast, Life Is Short.

“Everyone is the product of their own damaged childhoods or histories. I don’t believe that people are inherently good or bad,” Long says. “The big takeaway for me with this movie and the past few years of experiences I’ve had is that there’s such a need for compassion and to take people’s histories into consideration, rather than dismissing them or excusing them as being good or bad.”

In our polarized cultural climate, that may be easier said than done, and even Long admits it’s something he’s still “working on.” But above and beyond movies like The Wave, scientific research is beginning to suggest that drugs can help. Long is inclined to agree.

“My hope is that people are inherently good, even people who run these massive companies that are taking advantage of people, a company like Walmart, for example,” he says, before adding with characteristic humor, “I hope the entire Walton family takes ayahuasca on their next holiday and they see what they’re doing.”

The Wave is now available to rent on Sling TV for a one-time purchase of $6.99.