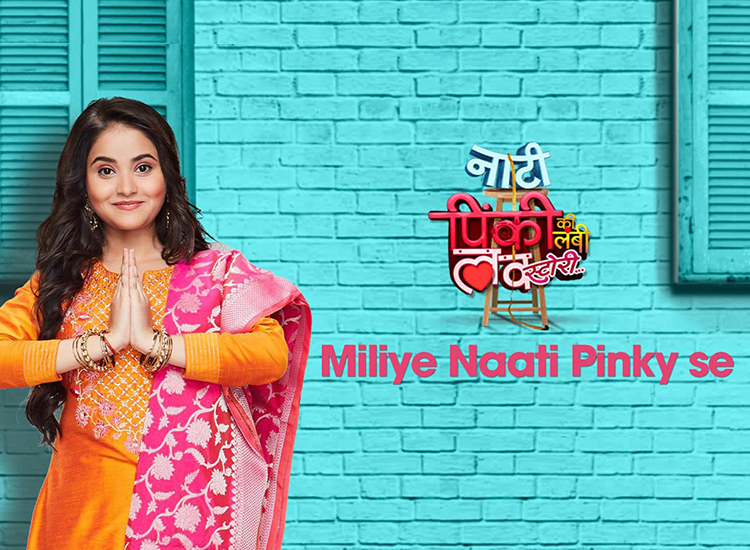 Written by Preeti Mamgain and premiering on Colors TV, Naati Pinky Ki Lambi Love Story centers around Pinky (Riya Shukla) — a characteristically short, charming and confident girl — and touches on themes of stigma, romance, family relationships, and comedy. Despite the challenges she faces, Pinky repeatedly proves she can overcome them with her humor and wit.

Set in New Delhi, a melting pot of cultures, Pinky Kashyap’s family is Brahmin and originally from Kanpur. We find out early on that her father, Ram Kashyap, is a traditional and conservative man of strict values. As a revered head of the Brahmin clan, he does everything in his power to ensure that their community observes traditional customs and norms — this includes ensuring that his children marry within their own community. Anya, Pinky’s sister, was disowned by her family for marrying a Tamil boy (Prithvi Iyyer) from a lower caste, and all the girls in Pinky’s family (including Pinky) were warned never to repeat Anya’s mistake. This family dynamic adds to the relatability of the show, as it also highlights the traditional relationship an Indian girl shares with their father. As one of many daughters, Pinky eventually sees through her father’s hard exterior and realizes he is not as harsh as he seems to be. As she becomes less afraid of him, her confidence grows and she feels more empowered to work toward her goals in the hopes of making him proud.

As you might expect from the show title, the love story is a central part of this show, but there is so much more that it has to offer. Most importantly, it sheds light on an overlooked aspect of our society: Society so often categorizes us into boxes based on what it perceives are flaws. For this reason, we are forced to fight our own battles to find our way out of those boxes. Proving to everyone, and most importantly to ourselves, that we are more than our complexion, weight or (as is in this case) height. While we come out stronger, the way this battle is fought changes us forever. This is something that perhaps every girl in India, or even the world, can relate to. During an interview, Riya Shukla even said that she hopes her character resonates with viewers.

Pinky would do everything to have her family’s approval. Her only vice was that she would sneak out and meet her elder sister Ananya and play with Ananya’s child. Ananya held on to the hope that her father would forgive her but was never forgiven. While Pinky was disheartened by her father’s strictness and rigidity, she was too scared to say anything. The relationship between these two sisters is one of love and support. Ananya acknowledges and appreciates Pinky’s quality of being able to add a comedic twist to any morose situation and pushes her sister to pursue a career in comedy, but Pinky is too afraid to go against her family and does not think much of that talent. Eventually, with the support of the man she ends up falling for, she does end up pursuing stand-up comedy. But even in her most insecure moments, Pinky never just sees the glass as half full.

Pressured to always fit the perfect mould that’s expected from her, Piny does everything that she’s supposed to do as an Indian girl looking to be a wife. This means that she learned cooking, sewing, knitting, and housekeeping — and she even completes her education in the field that her family has chosen for her. Similarly, the Brahmin match that was found for her also ticked all the traditional boxes of what is considered a perfect husband. Gagan Bhardwaj is shown to be well-settled and handsome, and most importantly, from the same community. Given her circumstances, Pinky wanted nothing beyond the conventional marriage and married life. But as destiny had other plans, after she is married to Gagan, Pinky ends up falling in love with her own widower brother-in-law (Prithvi Iyyer), who is the only one who comes to her rescue when things get out of hand. This is not the only hindrance there is to a perfect married life with Gagan. Soon after she moves in with her sasuraal (in-laws), she finds out that her husband is in love with his boss. It ends up being quite the shock that Gagan also only married to please his parents. Trapped within this strange turn of events, we wonder, how will Pinky maneuver her marriage? How will she manage the traditional expectations of her family? Where will her relationship with Prithvi end up? And will Naati’s Pinky’s love story be Lambi?