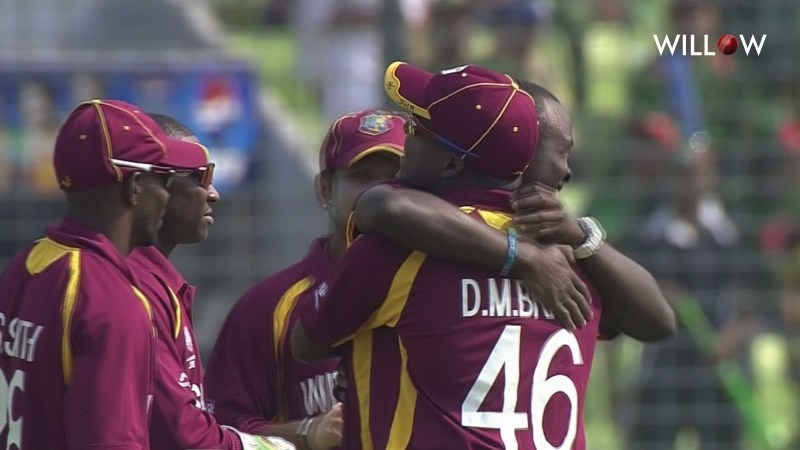 Two T20 World Cup wins (2012 and 2016) have seen West Indies rise as a force in One Day International and T20 cricket. They held England to a 2-2 draw in their five-game series and won the Test Series on a resounding note. West Indies cricket, which has been on a free fall with player vs board disputes, and no league structures, has been blowing hot and cold. They won at Headingley against England, and even beat Pakistan, all in a span of ten months. Later, the Jason Holder led side lost to Bangladesh and were then defeated by India. The ICC Cricket World Cup 2019 is two months away, with West Indies playing a tri-series with Bangladesh and Ireland before that. Does this team have what it takes to cause an upset and reach the semifinals? We profile the West Indies Cricket team in the buildup to the 2019 World Cup.

Beating numero uno England in the Tests and holding their ground in the One Day matches are positive signs for the 27-year-old Jason Holder. Chris Gayle is back at the top of the order, with scores of 162, 135, and 50 in his last three games. But the team went on to lose the T20 series against England and lost the Test and ODI series to Bangladesh. Playing against India, they were beaten 3-1 in the ODIs and 3-0 in the T20. In the past five years, the West Indies team has only won four Test series, all of them played at home. The World Cup however, will not be played with the traditional red ball, but with the ODI & T20 white ball, where they excel. If West Indies can perform when it counts, outmaneuvering their opponents, then they will be unstoppable.

Chris Gayle, Shimron Hetmyer, Andre Russell, Darren Bravo and Carlos Brathwaite. West Indies star packed batting lineup is one to fear for opposition bowlers. The 39-year-old Gayle is playing his last international tournament, while the all-rounders Russell and Brathwaite need to prove that their success in the T20 World Cup wasn’t a fluke. Shimron Hetmyer will be playing his first major ICC tournament; the left hander was captain of the West Indies when they won the U-19 World Cup three years ago. Only 22 years old, his highest ODI score is 127 with an average of 40. The lower order has Russell and Brathwaite, both of whom can destroy bowlers in the death overs due to their sheer strength and prowess.

The bowling unit of the West Indies, often considered a weak link in the past, has come together as a unit recently. Their bowling attack is led by 30-year-old Kemar Roach, who is a master of seam and swing. Keemo Paul and Oshane Thomas were teammates during the 2016 U-19 win and have been bowling well in tandem. This was seen in the Tests versus England. West Indies’ most improved bowler has been their captain, Jason Holder. Holder is no fast bowler nor is he a leg spinner who can bowl six types of deliveries, but he has the height to cause trouble with his gentle pace. He is ranked the world’s #1 all-rounder in the Test format of the game, with his bowling rank at a commendable sixth. Greg Chappell, in an interview to an Indian newspaper said, “If a team cannot take 20 wickets, it will not win consistently. It is bowlers who win Test matches; batsmen set them up or finish them off.”

West Indies’ bane has been their inconsistency as a team. Losing to Bangladesh in both Tests and ODIs and then beating England at home are two examples of how inconsistent this team is. The dispute between the West Indies Cricket Board and their players has caused many players to opt for international retirement, including notable stars such as Dwayne Bravo, Kieron Pollard, and Sunil Narin. At the top of the order, Gayle is 39 and doesn’t rely on running between wickets. If the opposition bowlers slow him down, West Indies will suffer while chasing totals. Hetmyer has barely played 20 ODIs while the much-lauded Darren Bravo has an average of 31 from the 100 ODIs he has played in.

Holder, Russell and Brathwaite have all played less than a hundred ODIs, which means less experience in bowler friendly conditions like of England. Bowlers Shannon Gabriel and Oshane Thomas have played a total of 25 ODIs between them. Jason Holder, the only player to retain his captaincy from the 2015 World Cup will have to lead his team well if West Indies wants to cause some major upsets in the tournament. They will need to have to put on an impressive show at their tournament opener, with their opposition being Pakistan.

This will be the last time we will see Christopher Henry Gayle in action, as the left hander retires from One Day cricket post the World Cup. Gayle, who is 39, is still hammering bowlers all over the park. Ben Stokes was at the receiving end of a Gayle hurricane, where he smashed 162. In his last three ODIs, Gayle has scored 162, 135 and 50. Gayle played for the Kings XI Punjab this IPL, where he was picked for his base price of 2 crore. West Indies hit their highest ever ODI score of 389 against England due to Gayle’s 162. The left-hander, who starts slow in his innings and picks up once the ball has worn some, is unstoppable. He deals only in fours and sixes, and if West Indies is to cause some major upsets in the World Cup, a Gayle storm will be making the headlines.

West Indies will most likely fall short of the semifinals, but before bowing out, they have it within them to take others out. If Holder can get his team formation right, particularly the batting lineup, the West Indies can cause a lot of damage. West Indies has the pace options to rattle opposition batting, with 3 quicks and a medium pacer to boot. The problems compounding in West Indies cricket are larger than the players, but they have been known to come together as a unit.

Enjoy the freedom of no long-term contract and FREE 8-Day Replay, making your favorite team’s match

coverage available for 8 days after they air.