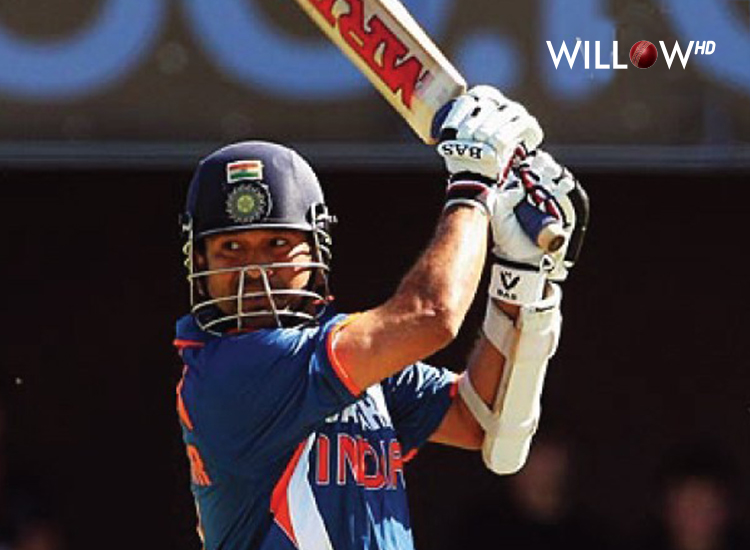 Making his debut in the 1992 World Cup, the Little Master has numerous records to his name in the cricket’s biggest tournament. He has scored a mammoth 2278 runs in the tournament, at an average of 56. Most centuries, most fifties and most runs in a series (673 in 2003) are all in his name. Retiring from international cricket in 2013, Sachin’s records will take massive efforts and superhuman ability to better. In this article, we go down memory lane and list SRT’s best knocks from the World Cups.

In their opening two games of the World Cup, India were convincingly beaten by South Africa and Zimbabwe. The shock loss to Zimbabwe meant India had to win their last three games. Tendulkar had lost his father on the eve of the game versus Zimbabwe and returned to Mumbai. Having spent four days in Mumbai, he flew back to England. Adding to the loss of his father was a niggling back injury for Tendulkar. Kenya put India to bat, with Tendulkar joining in at number four in the 21st over. Forming a partnership with Dravid, he reached his fifty in the 35th over off 54 balls. The next 90 runs came off a mere 47 balls, propelling India to a huge 329 for 2 after 50 overs. He even finished the innings with a six.

He finished his innings at 140*, coming off a mere 101 balls. In his book, Tendulkar wrote,”Though I managed to score a hundred in the match against Kenya – which remains one of my most cherished centuries, one I dedicated to my father – my mind was not always on the game.”

In a Group B game of the 2011 World Cup, hosts India took on South Africa. India started superbly with a 142 run partnership between Sehwag and Tendulkar for the first wicket. Tendulkar scored 111 runs, with eight fours and 3 sixes. His strike rate was 109, making this his 48th ODI century. The South African bowling attack had Steyn, Morkel, Kallis, Peterson, Duminy and Botha, all world class bowlers. This ranks fourth on the list due to the manner in which the Master Blaster steadied himself during the knock. Scoring less than fifty percent of his runs in boundaries (50 runs), Tendulkar’s knock is a masterclass in patience. He was dismissed in the 40th over, with the score at 267. India then had a mighty collapse, with the total at 296.

Flicks off the leg side, cover drive and a four back past the bowler were trademarks of this Tendulkar knock. He even managed to hit a Dale Steyn bouncer for a six, with fielders being positioned close by for edges. Sachin’s 111 led India to a respectable 296, but this was less considering the start they had.

Amla and Kallis led South Africa to victory with half centuries, but Sachin Tendulkar showed everyone why he plays so well under pressure.

A momentous semifinal against the eternal archrivals Pakistan at Mohali saw Tendulkar anchor a crumbling Indian innings. Kohli and Yuvraj Singh made zero and nine respectively, which made the Little Master conservative in his stroke play. He forged a 46 run partnership with Raina, and fell for a well made 85 in the 37th over. He faced 115 bowls, smashing 11 fours in the process. Wahab Riaz was Pakistan’s strike bowler who ended up with figures of 46/5 from his ten overs. While Tendulkar negotiated him quietly, he went after Umar Gul, who had figures of 69/0 from his eight overs.

Incredible as it may sound, Pakistan dropped Tendulkar four times in the course of his innings at Mohali. He was dropped by Misbah, Younis Khan and the Akmal brothers. He was dropped on 27,45, 70 and 81.  All this cost Pakistan 55 runs in total. India reached the World Cup final, winning by 30 runs. The saying goes, Catches win matches. This couldn’t have been better seen in this game.

Another encounter from the 2011 World Cup. Sachin went on to lift the World Cup at his home ground at the Wankhede, but before the final, he smashed England and South Africa in the group stages. While his 111 versus South Africa is at number four on the list, this knock propels due to his sheer dominance while batting. Ten boundaries and five sixes saw Tendulkar to a strike rate of 104, with him being particularly aggressive on Anderson. Anderson went to concede 91 runs in his 10 overs. India ended up at 338 in 49.5 overs.

A memorable encounter saw the game tied, with England’s captain Andrew Strauss leading the way with 158. Sachin went on to finish the tournament as the second highest run scorer behind Tillakaratne Dilshan. The gap between the duo- 18 runs. SRT finished with 482, while Dilshan had 500.

Pakistan had set a challenging target of 274 for India, with opener Saeed Anwar scoring 101. In a bouncy pitch like that of Centurion, bowlers like Shoaib Akhtar and Wasim Akram would thrive with their pace and swing. In walked Sachin Ramesh Tendulkar.

The diminutive opener took strike with Akhtar breathing fire at the time. The fastest bowler in the world was generating bounce and pace. Tendulkar took advantage of the width he was offering in his deliveries and smashed him for six over point in the second over of the innings itself.  A now iconic moment for Indian cricket fans, Sachin smashed Akhtar for two more boundaries in the same over itself. He was dropped on 32 by Razzaq, with the scoreboard being 57/2. Tendulkar went on to score 98 runs off 75 balls, with 12 fours and 1 six. Suffering cramps in the 90s, he required a runner but was dismissed by an Akhtar bouncer.

India won the game by 6 wickets, with Sachin being awarded the man of the match. His sheer attacking prowess in a crunch situation, adding to the stature of Pakistan is what makes this knock the top of our list.

Have a recommendation of another knock in mind? Drop a comment below or reply to us.