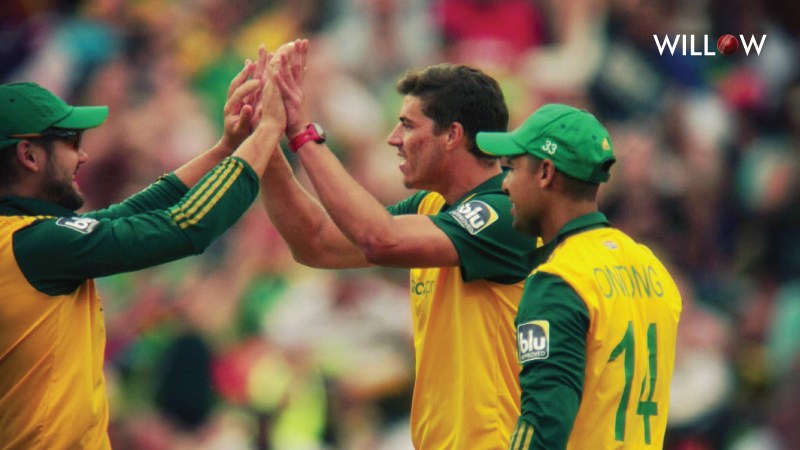 1999 England. 2003 South Africa. 2007 T20 World Cup. In each year, South Africa were expected to progress but were knocked out either by hara-kiri, bad weather or failing to show up for the big games. South Africa, cricket’s perennial chokers, enter the 2019 Cricket World Cup as the 4th ranked nation in the world, behind England, India and New Zealand. The Proteas, in 2015 reached the semifinals, only to lose to hosts New Zealand. Faf Du Plessis has been captain since August 2017 in all three formats, giving this team enough time to play together as a unit. Can the Proteas go all the way this time or will it be the same old story? We profile Team South Africa’s current form, strengths, weaknesses, X-Factor and Sling’s predictions for the 2019 ICC Cricket World Cup.

South Africa lost their most recent Test Series to Sri Lanka by a 2-0 margin in Sri Lanka. Their previous series against Pakistan, saw the Proteas cruise to rousing victories in Tests, ODIs and T20s. Their in-form player has been wicketkeeper Quinton De Kock, who was in good touch in the series versus Sri Lanka. His scores against Pakistan were: 45, 59, 18 and 129.  They even beat Australia in Australia in a one day series in November 2018. They are up against a rejuvenated Sri Lanka in the ODI series before they head to England to take on the hosts in the opening game of the World Cup.

South Africa have an experienced and powerful batting line-up. Their opening pair, wicketkeeper Quinton De Kock and veteran Hashim Amla, are a good mix of attacking and rotating the strike. They have played 86 games at the top, scoring 4014 runs at an average of 47! Amla, though has been dropped for the one-dayers against Sri Lanka in view of the World Cup. Their number three is their captain, Faf, who has an average of 45 in ODIs. The lower middle order is supported by the two left handers, David Miller and all-rounder JP Duminy. Miller is known to finish games at a quick pace while Duminy is handy with the ball too.

Another strength of this team is their bowlers, with experience and youth coming into play. The bowling attack is led by veteran Dale Steyn, who has Rabada and Ngidi for company. The trio can bowl a full 30 overs with searing pace. Rabada, who troubled the Indians when they toured at the end of 2017, is only 23 years old while Ngidi is 22. At 1.93 metres, Ngidi is capable of bowling at more than 140 kmph with short pitched deliveries. The conditions in England favor the trio, with an additional option of Tahir and Duminy in spin. Tahir, whose average is 4.67, should come in handy to stem the flow of runs in England where spinners don’t do well. South Africa’s bowlers are the best in the world, but can they perform under pressure in England?

AB De Villiers retired from international cricket in May 2018, with the only loss being South Africa. A batsman who can tear opposition bowlers to shreds, De Villiers was South Africa’s most reliable batter. He could change gears within minutes of his batting, rotating strike or carting boundaries all over the field. David Miller can finish a game but is known for his inconsistency. He has played 116 ODIs, averaging 38 in his 9 year career. If the opposition gets the top three of De Kock, Amla and Du Plessis out cheaply, South Africa will be pushed against a corner, especially in crunch games.

South Africa have a poor record in England and Wales, where the World Cup will be hosted. They were knocked out in the group stage during the Champions League 2017 and lost to England in the Twenty20 format and the Test Series comprehensively. South Africa’s other major weakness is their poor record of not winning a major trophy. They came close in 2015, 2007 and 1999, where they reached the semifinal stage, losing to eventual winners Australia on two of those occasions. It remains to be seen if the Proteas can maintain their cool in high pressure situations.

Now that De Villiers has retired, the focus on South African cricket has shifted from batting to bowling. Faf Du Plessis’s trump card will be Kagiso Rabada, the 23 year old fast bowler who has already taken 176 wickets in 37 Test matches since his debut in November 2015. His ODI debut against Bangladesh saw him finish with figures of 6/16 – the best bowling figures of all time on ODI debut.

Why Rabada? He has the pace and swing to trouble opposition batsmen in bowler friendly England. In the Test series versus England in 2017, he took 3 five wicket hauls in six innings. Rabada also possesses the ability to reverse-swing the ball against the direction of the seam, making him a genuine threat in England. He has the skills and consistency, but a major problem for Rabada is his on-field conduct. He shouldered Steve Smith upon taking his wicket, received a ban, but was then reversed upon appeal. Faf will use his strike bowler at crucial moments, especially towards the latter end of the innings, when the new ball is taken.

South Africa have it all to win their very first Cricket World Cup. Batting firepower, bowling prowess and a street smart captain in Faf. Can all this come together at the World Cup? With the World Cup now being of 10 teams where everyone plays each other once, the Proteas should progress to the semifinal stage until and unless they lose to a lower ranked team. They begin their campaign against England, with games against Bangladesh, India and West Indies to follow. Sling predicts the Proteas will reach the semifinal stage at the very least, but will fall short against the experience of the likes of India or England.

Enjoy the freedom of no long-term contract and FREE 8-Day Replay, making your favorite team’s match coverage available for 8 days after they air. Tune in to the top cricket channels Willow HD and WillowXTRA, starting today.