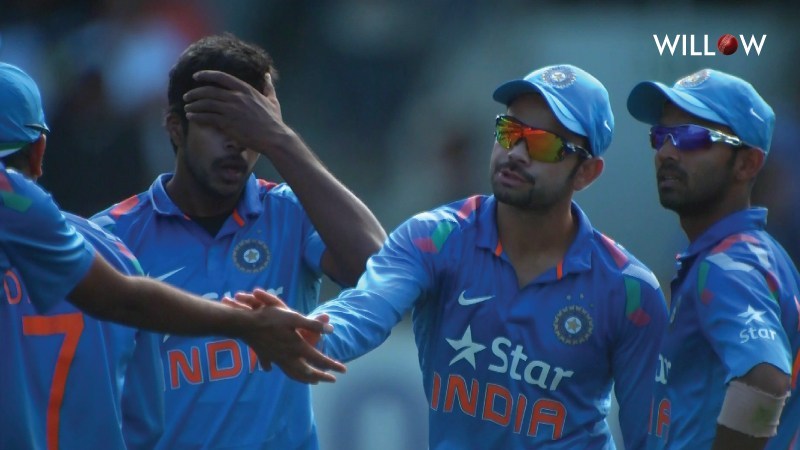 After beating Australia and New Zealand away, the Indian Cricket team has looked invincible. Kohli is in the form of his life, already crossing 500 ODI runs in 2019 and Jasprit Bumrah is the world’s numero uno bowler. Even Mahendra Singh Dhoni has competition for the wicketkeeper plus batsman spot in the form of Rishabh Pant. Considered hot favorites to lift the trophy for the third time, Kohli’s men have undone their good form over the past few months with unconvincing displays against Australia on home turf. They have lost the Twenty20 series by a 2-0 margin and the five-match series is tied 2-2 when this article was written. Here are four reasons why India won’t win the 2019 Cricket World Cup:

India have played England in 43 Tests in England since 1932 and they have only won 7. They have played 17 Test Series there and won just 3 of them. Those three came in 1971, 1986 and 2007. Kohli’s men were thrashed 4-1 in last year’s Test Series and lost 2-1 in the ODI series, despite playing positive cricket. Captain Kohli, who struggled with swing in the 2014 series took on the English attack but, was not complemented by his batsmen. The 2018 series saw India select a team for the first three Tests, and in a bizarre manner, a different team for the last two Tests. Murali Vijay and Kuldeep Yadav made way for Prithvi Shaw and Hanuma Vihari, who did not make much of a difference. Though the World Cup squad would not change, this clearly shows a lack of clarity when it comes to playing in England. Kuldeep Yadav, who was expected to turn heads with his Chinaman bowling came a cropper. In conditions which aids fast bowlers, the Indian Cricket Team will have their task cut out if they want to reach the semifinals at the bare minimum. Remember, this World Cup has a round robin stage where all teams play each other, with the top four going through.

Rohit Sharma, Shikhar Dhawan and Virat Kohli are confirmed at the top of the batting order. Kohli has raced to 500 plus runs in ODIs in 2019, and Dhawan smashed a sublime 143 off 115 balls in the fourth ODI against Australia. The middle order is where the problem lies for the Indian Cricket Team. Dhoni as the anchor and last recognized batsman has his spot confirmed. The former captain has been in good touch with 3 consecutive half centuries versus the Aussies.

India have experimented with Vijay Shankar, Rishabh Pant, Kedar Jadhav, Ambati Rayudu, Ravindra Jadeja and Hardik Pandya in the middle order. Jadhav has performed well, forming match winning partnerships with Dhoni and can bowl too. Vijay Shankar has been inconsistent, getting dismissed for low scores. Pant will probably play in the fixtures against the lower ranked sides towards the latter end of the round robin stages, with Dhoni being preferred for the crunch games. Pant hasn’t done himself any favor with some sloppy wicketkeeping against Australia in the recent fourth ODI. Rayudu has been in and out of the side, scoring half centuries but hasn’t been able to convert his starts.  His recent scores are 90, 13, 18 and 2. Dinesh Karthik usually comes in at the end to finish the innings on a high, never looking like someone who can perform under pressure. Jadeja and Pandya will jostle for the all-rounder’s spot in the playing XI. If India were to win the World Cup, getting the perfect combination of form and experience in the middle order will be crucial.

3. The All Rounder Spot

Who shall fill the lone all-rounder spot in the playing XI? Will it be the experience of Ravindra Jadeja or the confidence and aggressiveness of Hardik Pandya? Putting behind his controversy, Pandya has genuinely developed into a fine all-rounder, often playing a lone hand towards the end of an innings. Jadeja, on the other hand, has experience and has played 150 ODIs and 41 Tests in over a ten-year period for the Men in Blue. Pandya’s average (29) has hovered around Jadeja’s (30) and has been Kohli’s go-to man in high-pressure situations. Remember his memorable final over against Bangladesh in the 2016 World Twenty20? In seaming conditions like that of England, Ravi Shastri might prefer to play a medium pacer to a spinner to add an extra angle to an already lethal Indian bowling attack. Pandya can bowl 10 overs quickly and can get crucial breakthroughs, albeit being costly at times. Jadeja is economical and can frustrate batsmen. A noteworthy performance was a recent ODI against the Aussies, where he conceded just 33 runs in his full quota of 10 overs. If Team India gets this spot wrong with respect to whom they are playing, it might cost them a chance at the title.

The Board for Cricket Control of India (BCCI) is the richest cricket board in the world, and wherever the Indian Cricket Team travels, television and media frenzy follows. The Indian Cricket Team has been playing continuously, having toured England in 2018 and Australia in 2018-2019. They have then played the Asia Cup, a T20 and ODI series against Australia before the Indian Premier League begins on the 23rd of March and concludes on the 20th of May. The World Cup begins in England a mere 10 days after that. All the top Indian players: Rohit Sharma, Virat Kohli, MS Dhoni and Shikhar Dhawan captain their sides in the IPL and are expected to lead from the front. Both the 2011 and 2015 editions of the IPL were played after the World Cup. They were held between April and May of the respective year. Rayudu, Jadeja, Bumrah are stars who will play the whole season of the IPL for their teams and would be worn out from the long and strenuous season. Can the Men in Blue rise up to the occasion? It remains to be seen.