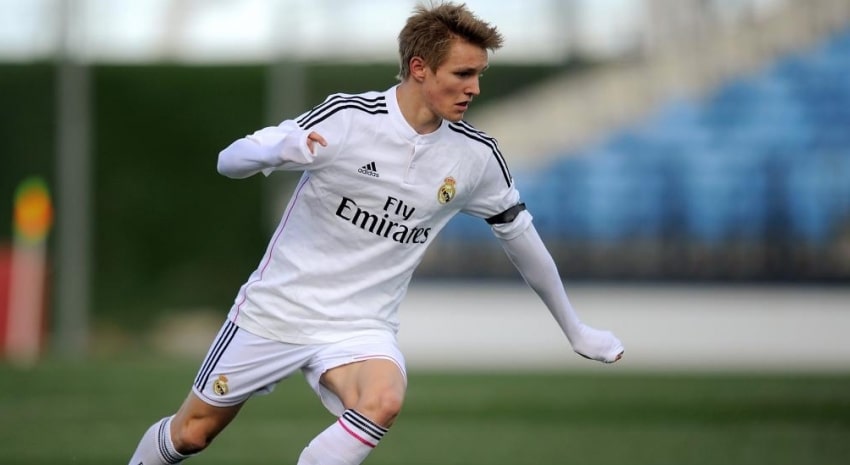 Martin Ǿdegaard appeared to have the world at his feet in January 2015. As a 16 year old, he was signed by Real Madrid from Norwegian side Strømsgodset Toppfotball, who beat off competition from other top European clubs — including Liverpool, Bayern Munich, and both Manchester clubs  — to capture him.

And, when he went on to serve as the youngest man to ever play for Real Madrid, it looked like the fairy-tale was set to continue.

Yet, two years after Martin joined the club, Real lost patience with their young protégé’s inability to keep up with their pace, and sent him on an 18-month loan to Dutch side Heerenveen — considered the footballing equivalent of the scrap heap, a long way from the bright lights of the Bernabeu.

Since then, though Martin has resurrected a career that looked as if it might end in disgrace before it had even really started. He slowly revived the Netherlands’ confidence in him, especially when loaned to another Dutch club Vitesse Arnhem. And, returning to Spain for a third loan spell — this time with Real Sociedad — he started the season so well for his new employers that he was named their player of the season for August.

Now there is talk that he could soon earn a recall to Real, and that the team may finally begin to reap the rewards for their original investment in the player, who is still young at 20 years old.

In part, Martin’s problems with adapting to life in Madrid were entirely predictable. Apart from his youth, the language barrier proved to be a big barrier to his settling down. Plus, he had a hard time adjusting to Spanish culture, which is debatably the polar opposite of the Norweigan.

But there was also the burden of expectation that comes along with joining a big club like Madrid, where officials and supporters are quick to make instant judgments, and are not prepared to offer younger players the patience that they often need in the early stages of their development. Martin is not the first such young player to have faced such problems at Real, and nor will he be the last.

It was not that he was an abject failure.  In his second season with Madrid, he played 38 times for Castilla, Real’s reserve side, in the third tier of Spanish football. Despite being 19 months younger than the next youngest player on the team, Martin scored once and provided seven assists, helping his side finish top in their group, only to miss out on promotion through the play-offs.

His reward, though, was to be shipped out on an 18-month loan to Heerenveen, a team toward the lower end of the Dutch Eredivisie.

Four days after joining Heerenveen, Martin made his debut in a 2 – 0 home win over Den Haag, coming in on the dying seconds of the game. However, he made a poor start for his new club, providing one assist and having one shot on target in his first seven games, a performance which saw him dropped to the bench. It would take him until his 15th game before he finally scored for the club against FC Utrecht.

The following season, Martin became a regular starter for Heerenveen, playing 23 times, and scoring twice. Hardly stellar statistics, but enough to convince Vitesse Arnhem, another Dutch side, to take him on loan when his spell at their Dutch league rivals had finished.

Again, he started slowly – after two matches and eight games, he had failed to find the net for Vitesse, and questions were once again being asked. Yet, close observers of the Eredivisie begged to differ; they noticed the young Norwegian’s ability and acceleration on and off the ball, his vision, composure, and ability to pick a pass with his cultured left foot.

And gradually, as the season progressed, those attributes materialised into positive results. He reached double figures for goals and assists (11 goals and 12 assists) from 39 games in all competitions, contributing to a goal every 143 minutes.

With such budding talent in their midst, Vitesse wanted to extend Martin’s loan period further. Instead, though, he returned to Spain and Real Sociedad for another one-year loan — although Real retains the option to either extend the loan for another season or to recall him after the end of the first year.

Unlike at his other clubs, Martin appears to have had little difficulty in adjusting to life in the Basque country with Sociedad. He scored his first goal of the season, the winner away at RCD Mallorca, and impressed the club’s supporters so much that they named him player of the month.

And, if he had not come back on the radar of his parent club before, his recent performance against Atlético surely did. In the match against Real’s big city rivals, Martin scored a goal and impressively controlled the midfield, winning him recognition for man of the match.

Most recently, social media was lit up by the role he played in Sociedad’s opening goal against Alavés, collecting the ball in midfield, nutmegging an opponent, and playing a pass that cut out three opponents to the feet of Mikel Oyarzabal, who duly scored.

Suddenly, rumors are circulating that Real plans to take Martin back at the end of his loan spell, and his form might even be enough to end their interest in signing Paul Pogba from Manchester United, saving them £150 million in the process.

Plus, he is starting to make his mark on the international stage, as well, scoring his first goal for Norway against Romania in June in a European qualifying game.

It may have taken nearly five years, and a few ups and downs, but it is increasing looking like Real has a star of the future on its hands.