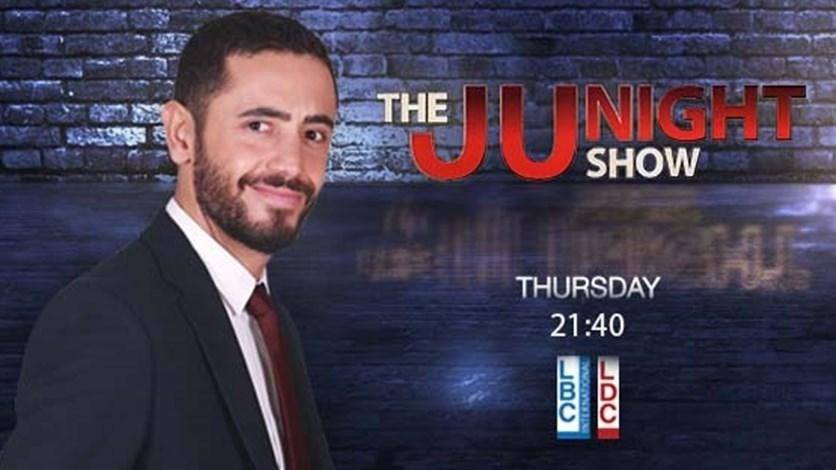 The JuNight show is a comedic program starring the comedian/actor Jneed Zain Iddeen, who is known for his talent, impersonation skills, monologues, and standup comedy. When he impersonates someone else, one could easily mistake him for the real person if his face was not shown. One could even argue that his impersonations are so convincing that some people might even be willing to believe that he is the one who he is impersonating even if his face is clearly showing. When it comes to his monologues, they are always engaging, and his timing is next to flowless. Finally, his standup is nothing short of excellent, and a laugh is guaranteed within seconds from joke to joke. As of recently, Zain Iddeen has solidified himself as a comedic force to be reckoned with within the Lebanese borders.

Every episode showcases political events in addition to artistic and social ones with Zain Iddeen’s own twist. He is known for his sarcastic commentary in addition to comedic segments in which he impersonates figures from various fields. In addition, he dubs interviews with his own voice. It is impressive what he does with the dubbing as the content is as comedic as someone would expect from a comical genius, but the lip syncing is also up there at all times. He also likes to host controversial figures while interviewing them in his comedic fashion that he is well known for. However, he does what he does with taste, and he does not turn off the interviewee by overdoing his jokes. Needless to say, Zain Iddeen is a class act, and he will surely inspire generations upon generations to come.

Only time will tell whether or not the show will overtake competition on other channels, especially shows that air at the same time. Nonetheless, if the show stays as strong as it is right now, there is no reason for it but to eternally prosper, continuing for seasons just like talk shows in countries like the United States do. Maybe he will even outperform his American counterparts!

Zain Iddeen entered the realm of comedy recently. However, he quickly established himself as a formidable force in the scene. In other words, he is quite the natural when it comes to comedy. Although he studied advertising, he found out that his forte is actually acting. He got his feet wet with the SL Chi team that he was with for nine months before the program stopped airing. He then got on the Kteer Salby Show on which he impersonated various known figures with the utmost talent. He took part in the Comedy Night play for three months on the Playroom stage with other known actors such as Mario Bassil, Tony Abu Jawdeh, and Tatyana Mirib. On the show, Zak Zik, he provided his critique skills along with Nisreen Hashim. Unfortunately, the show was quickly discontinued despite his brilliant efforts, meaning that he performed extremely well, but the show was discontinued due to reasons that were unrelated to him.

He put on great dramatic performances for shows such as Alaida and Alqinaa, showing that he can deliver a hefty performance in both comedy and drama. As a jack of all trades, he is able to tackle any role, whether it involves acting or not, and deliver the final result that all audiences want to see. However, he does not spread himself too thin and delivers within each field as if it is the only field he has ever worked in. In fact, he outperforms other performers who are only known for one style when he easily juggles between different styles just like he has done over the years.

Despite the fact that there are many comedians in the scene, Lebanon still suffers from the lack of comedic shows. That is because many audiences got bored with the monotony on television. As a desperate last resort, many shows started being extremely controversial in order to attract the audiences. However, that ended up turning off many potential viewers. Viewers are looking for a show that takes enough risks but not to the point of overdoing things. At one point, a team called Shi N. N. was formed, and it was comprised of comedic talent including Salam Zatari, Fuad Yameen, Abbas Jafar, Abdulraheem Aliwaji, and, of course, Zain Iddeen. However, the team dispersed, but Zain Iddeen was able to convert that experience into prolonged success in his solo career. Most notably, he dubbed his voice over George Clooney’s in an interview when talking about how he met his Lebanese wife, Amal Alam Iddeen. Although he found success, he was still on the search of a program that would test his mettle. That is why he was attracted to The JuNight Show. In the show, he is able to fully utilize his lengthy experience in show business by becoming a host like no other in the history of Lebanese television and arguably the Middle East in its entirety if not the whole world. As a true veteran, Zain Iddeen ensures that there aren’t any shortcomings in any of the episodes of the show.

One of Zain Iddeen’s latest participations was in the movie, Khabsa, with actress Rula Baqsemati. Otherwise, his full focus on is on The JuNight Show on which he is putting on the performance of a lifetime. Viewers who have been longing to watch a talk show that is one of a kind will be pleased to know that The JuNight Show is a show that came to conquer, and it sure does why it tries to do very well. The mere fact that is a talk show of this fortitude has graced the Lebanese screens is a true testimony of how far Lebanese comedy has progressed.Now that you have more than enough reasons to watch this fantastic show, be sure to watch the fantastic Lebanese show, The JuNight Show, on LDC when you subscribe to the Arabic mosaic pack on Sling TV!