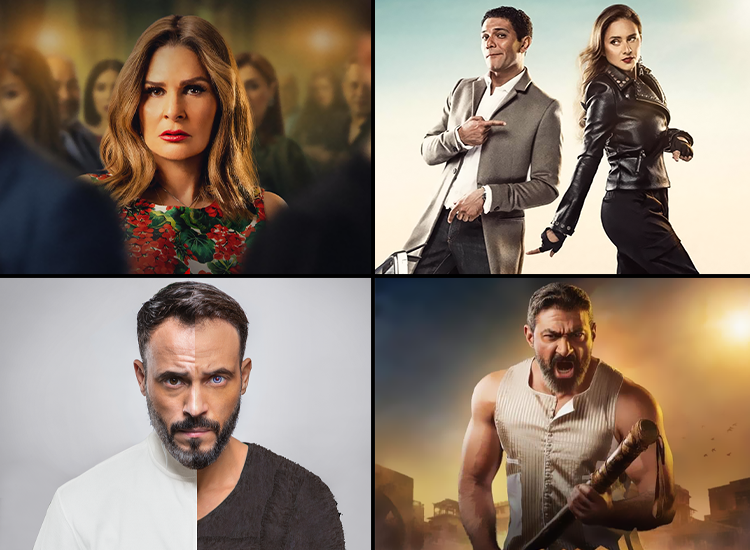 This year, while we may have to forgo some of our favourite Ramadan staples like the family-gatherings and the suhoor outings, there’s one tradition we’re happy to keep: The Ramadan mosalsal binge-watching marathon. And 2020 has brought with it quite the kaleidoscope of series and genres to keep audience across the world entranced; granting them a short break from the flurry of pandemic-related news. With everything from dramas to comedies to stories inspired by true events, this year’s mosalsals will see up and coming Egyptian stars as well as staples of Egyptian cinema who’d previously taken hiatus from Ramadan series, back and ready to provide their viewers with quality entertainment.

Set between the 1870s and 1880s, ‘El Fetewa’ takes its audience back to a time when Cairo was dubbed ‘Al Mahroussa’. The drama series, which stars Yasser Galal, explores the archaic culture of ‘fetewas’ in Egypt. As the series progresses, Galal’s character transforms into a sort of hooded hero defending the defenseless and standing up for the voiceless against the thugs ruling over the different districts in Cairo. Acting alongside Galal is Ahmed Salah Hosny, Mai Omar, Najla’ Badr and Ryad Khalil.

‘Kheyanet Ahd’ is a drama series starring Yousra, Hala Shiha and Mohammed Ryad. The storyline revolves around a family as they struggle through the financial, emotional, psychological and social obstacles that life throws at them. And obviously, Yousra’s family will probably have to overcome a few betrayals by one or two of its more duplicitous members because no Egyptian drama series is ever complete without a pinch of treachery and a few uncovered secrets.

‘Lama Kona Soghayareen’ is a thriller that sees a group of old friends faced with the consequences of a crime they committed in the past. As secrets are unearthed in this drama series, the group is forced to pay for the price of what they’d thought had long since been buried. The series boasts an impressive cast with the leads being Khaled El Nabawy, Mahmoud Hameeda, Reham Haggag and Hany Adel.

Starring Ali Rabi and Moustafa Khattar, ‘Omar w Diab’ is a comedy about two unemployed men who have signed trust receipts and now have to pay back their debts, which leaves them in quite a few sticky situations.

Asser Yassin and Nelly Kareem team up in the comedy, ‘B Meet Wesh’. Kareem and Asser are two con artists who’ll be duping quite a few people this Ramadan.

Inspired by true events, ‘El Ekhteyar’ is an action series telling the tale of real-life hero and martyr, Ahmed Saber Mansi. Played by Amir Karara, Mansi was the commander of the 103 Sa’ka forces who was martyred during a battle in Egypt’s Raffah in 2017 while defending his homeland against a terrorist attack. The cast is made up of Amir Karara, Ahmed Al Awdy, Deena Fouad and Ahmed Tawfik and Dia’ Abdel Khalek, among others.

Forsa Tanya is a romance/drama series where Yasmine Sabry plays the character of Malak - a woman who’s been let down by love numerous times and is about to get a second chance. Starring alongside Yasmine Sabry is Ahmed Magdy, Heba Magdy, Edouard and Heba Abdel Ghani.

Separated in their youth and adopted by different families as kids, four siblings are reunited as adults and forced into complicated situations that’ll test their newly-found relationship. The drama stars Zeina, Dalal Abdel Aziz and Mohammed Ala.

Featuring an impressive cast including Ghada Adel, Khaled El Sawy, Eyad Nassar and Sabrine, Layalina 80 is a drama that follows the complicated relationship between two families from the 50s all the way into the 80s.

Two men, Timon and Pumba, move into their grandfather’s house only to find out that they’re burdened with carrying the full weight of responsibility for the household. It gets even more complicated when these two fellows are forced to face off with the landlord who’s looking to evict them and turn their home into a residential tower. The cast of ‘Regalet El Beit’ includes funny man Ahmed Fahmy, Akram Hosny, Bayoumi Fouad, Dina Mohsen and Lotfy Labeeb.

Starring queen of drama Ghada Abdel Razik, ‘Sultanat El Moez’ narrates the story of a woman who inherits a fried liver shop from her father and uses the financial gains to raise her siblings. Things get complicated, however when the sultana falls in love. Acting alongside Abdel Razik is Mohamoud Abdel Maghny, Mohammed Lotfy, Hanna Hosny and Deena.

‘Wenheb Tani Leih’ is a romance series that looks into the issues of marriage and the problems faced by modern day couples. Starring Sherif Mounir, Yasmine Abdel Aziz, and Sawsan Badr, ‘Wenheb Tani Leih’ takes a magnifying glass to the ups and downs of holy matrimony.

Starring Mohammed Ramadan, ‘El Princ’e is a drama series about vengeance and sibling rivalry. Radwan, played by Ramadan, is faced with a shocking surprise following the death of his father, with whom he’d been working side by side in an auto-shop. Once Radwan’s siblings get involved, Radwan is framed for a crime he didn’t commit and ends up in jail. He then vows vengeance on all those who’ve wronged him. ‘El Prince’ is made up of an impressive cast with Noor El Lebnaneya, Ahmed Zaher and Rogina acting alongside Ramadan.

Drama series Um Haroun stars Kuwait actress, Hayat Al Fahad. Al Fahad plays the role of a Jewish doctor in Kuwait in the 40s, who treats the residents of her village from both their physical and emotional ailments.

Adel Imam takes on the role of Noor Abdel Mageed - nicknamed Valentino - who owns a chain of international schools. His wife, played by Dalal Abdel Aziz, is the stern principal running the school, who lays down the law both at the institution and at home. The comedy series sees Valentino as he finds himself in sticky situations while trying to live his best life and also to abide (or not) by his wife’s rules. The cast includes Dalia El Behairy, Rania Mahmoud Yasseen and Ahmed Fareed.

Kuwaiti series ‘Al Kon Fi Kaffah’ explores the issues faced within every Gulf household through its archetypes and plot twists. The series is centered around Shemoor, who is a controlling woman ruling the household with an iron fist. The cast includes Elham Al Fadala, Maram Al Belucci, Mahmoud Bo’ Shaheri and Taif, among others.

All Haya is guilty of is accepting an invitation to a birthday party and that’s when her life is turned upside down. Set in the 80s, this drama series follows the character of Haya, played by Basma Hamada, as she tries to piece together the events of that fateful night after which led to imprisonment and chaos in her life. The cast include Hend Belucci, Iman Faisal, Semood and Reem Rahma.

In Kuwaiti series, ‘Shagaf’, Huda Hussein plays the role of a multimedia painter (double check) who injures her hand and finds solace in a young artist. As the two forge a working relationship where the young artist paints what Hussein’s hand no longer can, things escalate when the multimedia artist starts falling in love with her apprentice. Acting alongside Hussein is Hussein Al Mansour, Zahra Arafat, Jassem Al Nabhan and Suleiman Al Yassin.

In ‘Loabet El Nesyan’, Dina El Sherbini plays the role of a woman who’s lost her memory and tries to retrieve the bits of her past that she’s forgotten while navigating through her present. Acting alongside El Sherbini, is Ahmed Daoud, Injy Al Mokkadem and rising stars, Ali Kassem and Rosaline El Bay.

‘El Nehaya’ follows an engineer who turns against technology and realizes the dangers of its accelerated advancement. In an attempt to halt this amplified pace of technological progress, the engineer ends up in difficult situations which are further aggravated when he meets his clone. The engineer is portrayed by Egyptian actor, Youssef El Sherif. El Nehaya’s cast includes Amro Abdel Jalil, Ahmed Wafeek, Mohammed Lotfy and Nahed Sabae. Catch all these exciting new series during Ramadan, by subscribing to Sling TV Arabic, sling.com/arabictv.

5 directors to keep up with this Ramadan