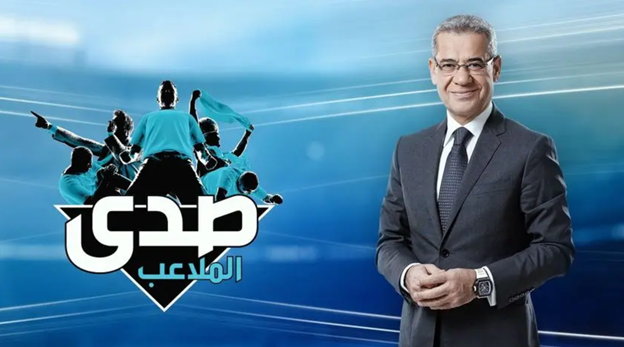 For three years, Muhammad Al Shihri, the host of MBC’s Sada Al Malaeb, was limited to discussions of Saudi Arabian football. When Shihri had to leave and concentrate on his Ramadan show, Huroof wa Uloof, the sports show went into hibernation.

When Sada Al Malaeb returned, it returned with a new, more popular format. Mustafa Al Agha became the host and opened the show up to report on not only all Arab sports news, but also the international sports scene.

A charming and charismatic host, Al Agha interviews numerous experts and analysts, adding depth through differing viewpoints. Recently, the show has focused on conducting daily interviews with many players, showing their fans a more personal side of them.

The show’s premise was inspired from an older show, Asdaa Kaas Al Aalam, which was about the World Cup. Asdaa Kaas Al Aalam showed 90 seconds of World Cup footage, then a 90-second discussion, but creators of Sada Al Malaeb believed that format might narrow their audience to only the more expert viewers. As a solution, they decided to host discussions with broader topics to attract the average viewer.

Both shows ended up winning awards, even when they hadn’t been around for long. The famous Kooora site featured a poll that asked visitors to rate shows’ analysis of the 23rd Arabian Gulf Cup, and Sada Al Malaeb came out in first place. The United Arab Emirates magazine, Super, also polled site visitors about various entertainment shows, and the results rated Mustafa Al Agha the best newscaster, studio analysis presenter, and second best presenter overall.

Sada Al Malaeb’s success can be traced back to 2006, when it won the best Arab TV show covering the World Cup in Germany, and it never would have reached such a level of success without its host. Mustafa Al Agha. As a sports journalist, Al Agha is best known for his programs in the Arabic, making him one of the most dominant authorities in the region.

Al Agha was interested in sports from a very early age. Inspired by his English studies at the Damascus University, he even created his own sports magazine in English. In 1981, Al Agha started his career as a journalist, writing for the Syrian newspaper Alitihad. While pursuing his master’s degree in the United Kingdom, he began working for MBC. Al Agha even experimented with radio, presenting Makha Al Ryadha and earning his place as a prominent figure Arab region. He is currently the Head of MBC Sports.

Eventually, Al Agha and Sada Al Malaeb became synonymous. Even those who don’t know Al Agha’s name will usually recognize him as the face of Sada Al Malaeb. The show has become his magnum opus, and through it, he’s become the treasured originator of such catch phrases that have echoed across the Middle East for years now, such as “a million, trillion, gazillion congratulations.”

Al Agha’s Twitter is one of the most followed in the Middle East, with 4.5 million followers. The audience of the Arab Social Media Influencers Summit recognized him as their favorite Arab social-media influencer. He also won such awards as the best Arab sports programmer covering European sports, the best studio provider, the best announcer for sports publications, the best announcer for sports bulletins, and the best coverage of Gulf 13 in Bahrain, in addition to Gulf 18 in the United Arab Emirates.

Catch the Arab show Sada Al Malaeb on MBC when you subscribe to the Arabic mosaic pack on Sling TV!