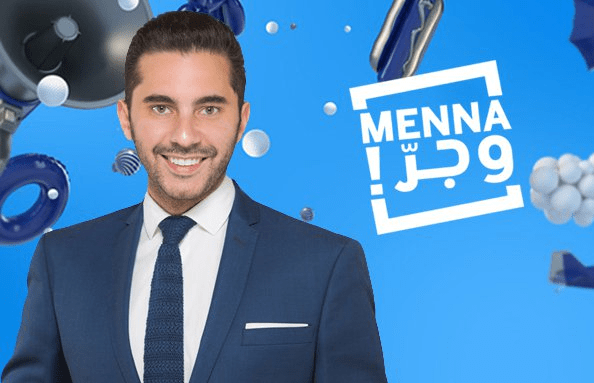 Menna W Jerr is the latest show by seasoned hosting veteran and Lebanese media personality and producer Pierre Rabat. Because of the show, Rabat’s fame has grown, and he’s now first and foremost known for the constructive criticism he provides celebrities. The feedback he gives celebrities is surprisingly delicate, and Rabat’s style is to deliver it through the lens of viewers — not to insult, but rather, to form a connection between the celebrity and their audience.

Rabat’s career began back in 2002, when he entered the media world by co-hosting on the youth-oriented show Rotana Café on Rotana TV. After playing numerous roles on Rotana TV, Rabat made plans to find work in Dubai — he had been working Studio Vision on Rotana Music but thought he Dubai might kick his career into a higher mode. He would’ve left if it hadn’t been for Michelle Almer, the head of Rotana, who asked him to stay, promising him a role in relaunching MTV Lebanon.

Rabat was placed in charge of technological research and development for MTV, choosing cameras and equipment. The responsibility was not out of Rabat’s wheelhouse — when he was in college, he’d worked in the technology department of Radio France and had gained a ton of transferable experience. He put that experience to good use once again and proceeded to direct much of the footwork involved in putting together a mixture of shows and finally launching MTV Lebanon. He hosted various shows himself, including Log On and Men El Akher, and produced Meen Aal. And then, once MTV Lebanon became well-established, Rabat focused on a show idea that had been long in the making: Adapting Touche Pas A Mon Poste for Arabic audiences.

On a mission, Rabat took off for France and brought back the rights to the show. The remake was named Menna W Jerr, and with his crew, he proceeded to guest host and then air a trial episode on MTV Lebanon.

The success of Menna W Jerr has been phenomenal — far outweighing the success seen by the Italian and Canadian versions of Touche Pas A Mon Poste. And, somewhat surprisingly, the French decided to sell the rights of the show to Rabat, saying that the show’s content fits his personality type better than anyone else’s.

To give an idea about what an episode’s content could be, George Wassouf was once hosted during new year’s eve. Wassouf kicked off the episode by singing songs such as Allim Albi and Addak El Mayyas. He said that his scarce appearances were an attempt by him to make the audience miss him. In addition, he does not like to make appearance when he does not have something new to talk about. He also mentioned that the first interview that he has taken part of as an interviewee was after his career launched by 20 years, specifically during the year of 1994 in the show, El Layl El Maftooh. As usual, Wassouf was honest in his answers, poking fun at the beginner artists who hire a manager as soon as they release their first songs. He also criticized those who looked down upon their fans. Interestingly, he mentioned how is family is away from the spotlight. His mother spends most of her time at the church, and she has never attended any of his live performances (in addition to his siblings). When he was 13, he escaped his home for the first time, fleeig to Aleppo and going to a cabaret club. However, it was only three days before he went back. He proceeded to buy his mother a 50-pound washer when washers at that time used to run for 25 pounds. He escaped yet again at one point, and he slept on the street with his shoe as a pillow.

Since his youth, he has felt that he is the “head” in any field that he takes part in whether it is in school or onstage until he became famous. Wassouf proceeded to mention his pride, saying that he is inferior to no one but God, respects everyone, and pretends that he has not seen a specific person if that person decided to greet him seated without standing up. He has also claimed responsibility over his family from a very young age. He considers them to be the most important thing in his life. Wassouf spoke of his family very emotionally, saying that the father is more important than his mother because hurting the father is harder. When it comes to his childhood, he said that he did not experience a typically enjoyable childhood, but he is still satisfied with what he has done. The most surprising moment of the episode was when his mother appeared onscreen, making her debut. Wassouf was incredibly touched as his mother is someone he resorts to in dire times of emotional need. They have a connection on a spiritual level no matter how far they are. Finally, Wassouf brought up how he does not like nicknames that he was given based on his heft as an artist, wishing that they would be eliminated forever.

Menna W Jerr is simply extraordinary, thanks to all of the components that go together harmoniously. Now that you have more than enough reasons to watch this fantastic show, be sure to watch the fantastic Lebanese show, Menna W Jerr, on MTV Lebanon when you subscribe to the Arabic mosaic pack on Sling TV!