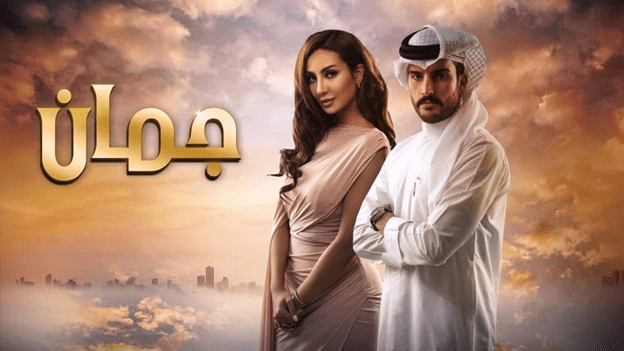 “Juman,” a series that’s driven by themes of romance, treachery, abandonment, and abuse, tells the complex and heart-rending story of Juman (Noor Alghandoor), a woman who falls in love with her cousin, Hisham (Muhannad Alhamdi).

An Eagle Films production, “Juman” has already — after only one season — garnered the attention of the entire Arab world, thanks to its brilliant casting and the relevance of its plotline to the typical Middle Eastern relationship. Among the talented cast are Huda Alkhateeb, Hassan Ibrahim, Abdullah Atturkumani, Nasser Kermani, Fouz Alshatti, Muhammad Aldoseri, Ghuroor, Fatma Attabakh, Layali Dehrab, Farah Almahdi, Fatma Fouz Alshatti, and Ahmed Alhazeem.

Inspired by writer Alyaa Alkathemi’s storytelling, “Juman” marks producer Khalid Alrifaei’s debut into the drama genre. His work is amplified by the vision of director Khalid Jamal, who’s known for introducing a new style of directing to Kuwaiti television that serves to keep viewers on the edges of their seats with suspense.

“Juman” does a fantastic job highlighting the emotional and psychological stress Middle Eastern women are often challenged with when overwhelmed by societal (especially religious) constraints. The constant changes and variables in Juman’s life frequently take a sour turn as relationships that were once affectionate in nature are eventually marred by treachery and overall uncertainty.

The greater a success “Juman” becomes, the more its lead actors find themselves under the media’s magnifying glass. Because the show contains graphic scenes of beating and other violence, many viewers are under the misconception that the actors themselves are violent in real life. To dispel such beliefs, Alhamdi came forward and addressed them straight on, explaining that he believes in monogamous relationships that thrive on love and clear communication. He has also denied any romantic relationships between any of the actors off-screen.

Because he’s received so much critical acclaim for “Juman,” Alrifaei has announced that he’s taking on a subsequent project — a film called “Wa Baadah” that’s also inspired by Alyaa Alkhathemi’s storytelling. The movie will be set in Kuwait and Georgia, both of which are known for their mixture of old and modern architecture, as well as for having no shortage of natural scenery. Noor Alghandoor will also star in “Wa Baadah,” along with Bashar Alshatti, Asmahan Tawfeeq, Intisar Alsharrah, Ghadeer Assabti, Kafah Lirjaib, Layali Dehrab, Abdulaziz Alnassar, and Ahmed Albarood. Lulwa Abdussalam has agreed to direct the film, and May Alsaleh to produce it.Watch the exciting Kuwaiti show, “Juman,” on MBC when you subscribe to the Arabic Mosaic pack on Sling TV!