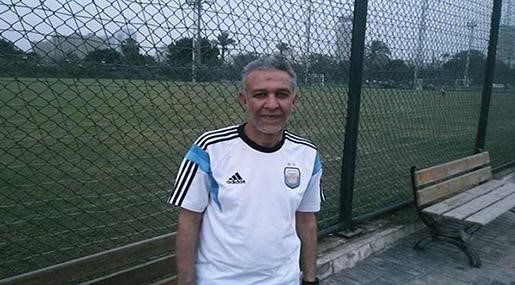 In stark contrast to their Northern European or North American counterparts, Egyptian football commentators have earned a reputation for their unbridled enthusiasm and ability to work themselves into a frenzy, irrespective of what is happening on the field.

Instead, Arabic commentators happily leave objectivity behind them in the studio, and with a  passion matched only by those in Spain or South America, yell and wail at every turn in a match, to the extent that the casual observer is unable to tell if a goal is about to be scored, or if the ball has merely gone out for a throw to one side or the other.

In fact, the commentators have become so well-known for their antics that they are now an integral part of the match experience — arguably as important as any of the players on the field. And, were it not for the language barrier, some of these men would be household names even beyond the Arab world.

Here are some of the best-known commentators.

Mohamed Latif was one of the first men in Egypt to make a name for himself as a football commentator. A former professional player, who was a distinguished servant of Zamalek for many years, Latif also played for the national team and helped them qualify for their first World Cup in 1934, scoring three goals against a British mandate side in the qualification round. He would then go on to play in Egypt’s only game at the subsequent World Cup in Italy, a 4 -2 defeat to Hungary in Naples.  He also played for Egypt at the 1936 Olympic Games in Berlin. Latif even had a brief spell in Scotland with the Rangers, although he only ever played one game for them against Hibernian.

In the 1950s, Latif would go on to coach Zamalek, before he pivoted into broadcasting, where he became the best-known sports commentator in the country until his retirement. He died in 1970.

Mahmoud Bakr, who died of kidney failure in 2016, was one of the most famous commentators of all time. A retired footballer himself, he began his career in the 1980s, working in the media as a radio and television commentator. He quickly built a reputation for himself because of his insightful analysis, ability to predict the twists and turns of a match and his witty remarks.

Typifying this was his utterance when Egypt were awarded a penalty in their World Cup match against the Netherlands: “Justice has fallen on the Palermo Stadium.”  And viewers, especially those whose attention might’ve wavered for a moment, would regularly be regaled by his catchphrase, “To whoever is out at his balcony for a cigarette, to whoever just began following the match, come in, a goal has been scored.”

Bakr was loved as much for his idiosyncrasies as for his knowledge and passion about the game. He would regularly berate directors of football programs for a glitch on screen, or if they chose to cut away to a shot of the crowd when a promising attack was in full flow.

And he didn’t confine his remarks just to football. It was not means out of the ordinary for him to interrupt a commentary to lambast Alexandria city officials about an issue that affected the daily lives of its inhabitants, such as when he expressed the hope on air that school children would be able to find desks.

Another well-known football commentator,  Abdel Rahim Mohamed, literally died while working in the FIFA 2018 World Cup in Russia last year. A former player and coach of Cairo side Zamalek, Mohamed suffered a heart attack and subsequently passed away after Egypt’s loss to Saudi Arabia during their Group Game in Volgograd.

A regular contributor to coverage on Nile Sports Channel, and widely regarded as one of Egypt’s premier experts on football, Mohamed reportedly felt “emotional” during his country’s nail-biting match, which ended with a late injury-time winner for the Saudis, as Egypt slipped to a 2 – 1 defeat.

Former Egypt national team goalkeeper Ahmed Fawzi, who was present in the studio with Mohamed, said that the commentator had looked “exhausted” and “affected” by the team’s defeat.  At the end of the game, Mohamed was supposed to deliver post-match analysis on air but, instead, suffered a cardiac arrest, and was rushed to a medical facility within Cairo’s state television centre, and then to the hospital, where all attempts to revive him subsequently failed.

Another source of amusement for Egyptian football fans has been the struggle of some commentators to properly pronounce the name of some of the foreign players and managers that have come into the local leagues in the past two decades or so.

Players from Ghana appear to be particularly hard for. Striker John Antwi, who has enjoyed spells as both Ismaily and Al-Ahly, is routinely called “Antoy” by match commentators, while Akweley Mensah, a midfielder who has played for Al-Masry, Al-Ahly, Wadi Degla, and Ittihad El-Shorta is usually referred to as “Akouti” by broadcasters.

Nigerian Minusu Buba was once one of the top strikers in Egypt, plying his trade with distinction for Arab Contractors, ENPPI, and Ittihad El-Shorta. However, his first name puzzled local commentators for years, with many finally settling by just calling him “Buba the Nigerian.”

Another Nigerian whose name caused problems was Isaac Lawal, an attacking midfielder who was one of Al-Ahly’s best known players in the late 1990s. Attempts to pronounce Lawal resulted in “Awali,” which in Arabic means “the first.” Lawal simply became Isaac Awali (Isaac the First) for many viewers.

And then there was the case of Portuguese coach Jaime Pacheco, who coached Zamalek in the 2014 – 2015 season before leaving in controversial circumstances. His departure was perhaps hastened by the complete mish-mash local commentators made of his name, so that he was most frequently called “Jembasheco.”

Watch the exciting Egyptian Premier League games exclusively on ON Sport in Arabic and in HD when you subscribe to the Arabic Mosaic Pack here!