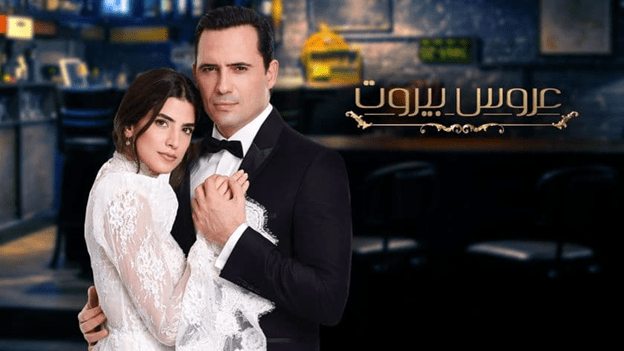 Generally, shows that are expected to become the biggest hits are reserved to air during Ramadan. “Arous Beirut,” which came out in September, has proved to be an exception to the rule. In this rags-to-riches story, Carmen Bsaibes plays Thouraya, an orphan who grows up to become a singer and fall madly in love with Fares, a suave and successful businessman, played by Dhafer L’Abidine.

Audiences love watching actor Dhafer L’Abidine. His magnetic charisma pulls the audience in and keeps them enraptured. And, to their delight, he demonstrates his mastery of the Lebanese dialect through his character, in spite of his Tunisian origins.

Upon watching the show, it becomes obvious why “Arous Beirut” has won such high acclaim. The show is a classic love story, replete with passion, romance, and of course, forbidden romance. The couple’s biggest impediment is Thouraya’s villainous mother-in-law, who doesn’t want her to marry Fares. It is up to Thouraya’s resourcefulness to cleverly navigate the obstacles posed by her mother-in-law’s oppression.

The show derives inspiration directly from the Turkish show, “Bride of Istanbul,” and puts an Arabian spin on the concept, keeping the same themes but allowing the characters to develop independently in original scenarios. This connection to “Bride of Istanbul” may be tied with MBC Studio’s recent partnership with O3 Production, which has long been dubbing Turkish shows in Arabic. “Arous Beirut” will be the first series produced by the new company.

In “Bride of Istanbul,” the bride was played by Asli Enver, while the groom was played by Ozcan Deniz. Lebanese-Australian actress Daniella Rahme was initially supposed to take the role of Sorreya in the Lebanese rendition. However, she was already working on “Tango” with Basel Khayyat, and an alternate had to be chosen. Carmen Bsaibes was a natural next choice, however. She and D’Abidine have a natural heat when on-screen together, which likely stems from their history of working together — as they did in “Eugenie Nights.”

Watch “Arous Beirut,” a story of forbidden love, on MBC when you subscribe to the Arabic Mosaic pack on Sling TV!