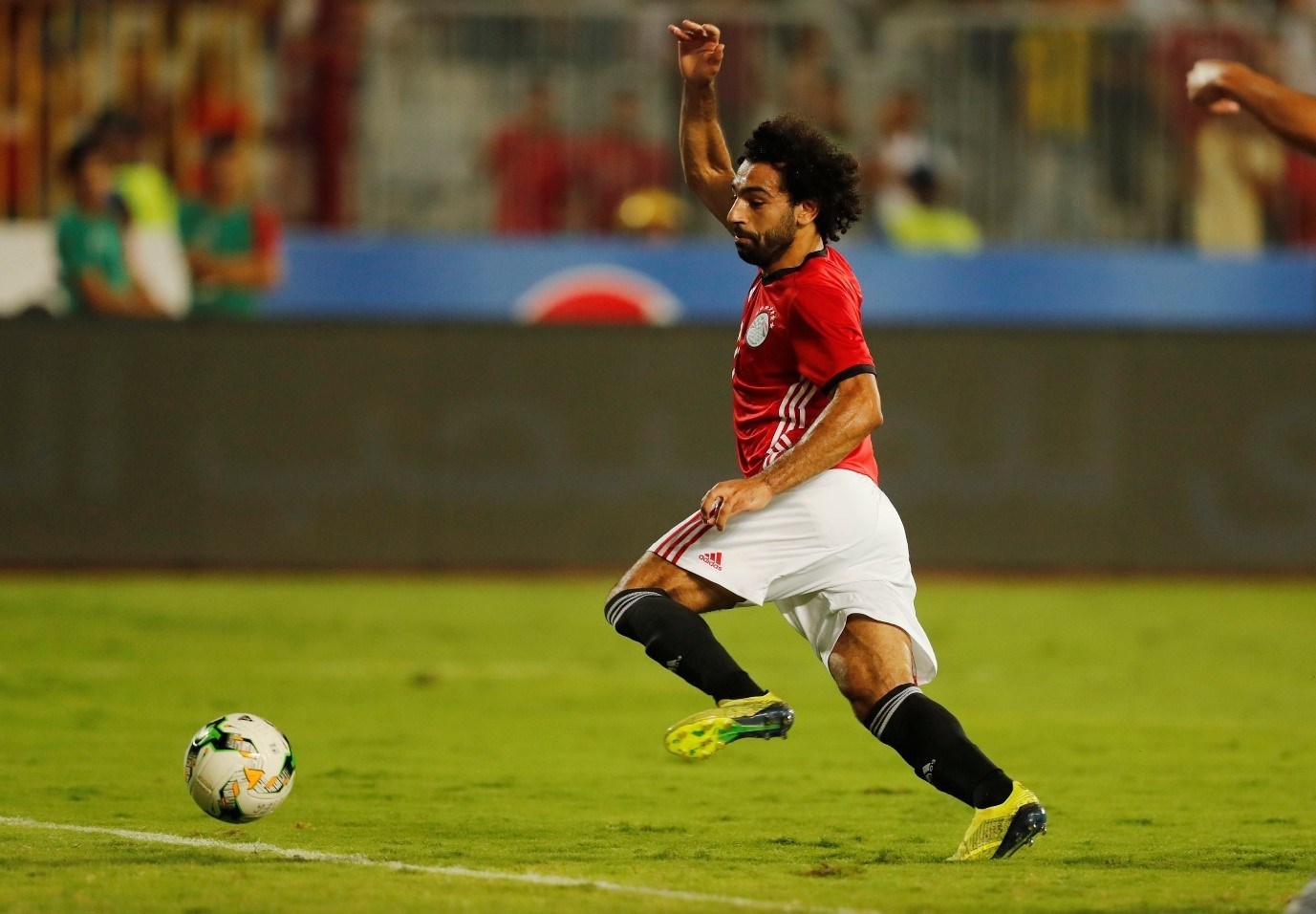 Egypt guaranteed their place in the last 16 of the African Cup of Nations on Wednesday night by defeating DR Congo 2 – 0 in Cairo, ensuring that they join Nigeria as one of the  teams already through to the next round. They will top Group A if they manage to avoid defeat to Uganda in their final Group game on Sunday, after The Cranes could only manage a 1-1 draw with Zimbabwe earlier in the day.

Having lost their opening group game against Uganda, DR Congo took to the field knowing that they needed a result against the hosts to get their campaign back on track. And they started brightly, spurning a golden chance to take the lead after just ten minutes.  Winning a corner on the right, the ball eventually fell to centre-back Marcel Tisserand up from the back, but his effort from a few years out struck the crossbar, rather than finding the net.

15 minutes later they were made to pay for it, although there was an element of fortune about Egypt’s opening goal. Mo Salah crossed from the right into a pack of players, and the ball fell to Egypt’s captain, Ahmed El Mohamedy. The Aston Villa’s first effort was blocked, but he managed to dig the ball out of his feet, and flick home with his right foot to send the stands into loud jubilation.

DR Congo had a chance to equalise but again could only hit the woodwork through Jonathan Bolingi’s header. And, yet again Egypt punished them for their profligacy in front of goal by scoring again, although, if their first effort was somewhat lucky, the same could not be said about their second, just before half-time. Trezéguet won the ball in midfield, evading three opponents, and directed the ball to Salah, running to the right of the penalty box. The Liverpool man burst into the box on the diagonal, and twisting past the attentions of two Congolese defenders, cracked a curling shot inside the near post, with the goalkeeper powerless to stop it.

With a comfortable lead at half-time, Egypt were more concerned with protecting it rather than adding to their advantage in the second period. Again DR Congo had their moments – Bolingi shot across the face of goal on the hour mark, Christian Luyidama went close with a header, and Everton winger Yannick Bolasie’s free kick missed the post by inches. Still the defeat leaves their AFCON hopes in tatters, and they must now beat Zimbabwe on Sunday, and hope other results go their way, so that they qualify for the next stage as one of the best third placed teams.

Certainly they will be hoping that the Zimbabwe goalkeeper Edmore Sibanda does not show the sort of form that he demonstrated in the opening game of this year’s Championships against Egypt, when he was the difference between his team losing by a single goal and a cricket score.

The 35-year old proved his mettle after just two minutes, parrying a deflected cross from Salah and then keeping out an effort from Marwan Mohsen from the resulting corner. Mahmoud Alaa wasted a simple chance to give Egypt the lead from a Salah corner, and was fortunate that his mistake did not cost his side when Khama Billiat burst through on the home goal. Fortunately for the local supporters, goalkeeper Mohamed El-Shenway was on hand to come to the rescue.

The hosts finally got the goal that their pressure merited, after Trézeguet cut in from the left, and curled a shot with his right foot past the stranded Sibanda, who had no chance of saving it.

Trézeguet thought he had scored another early in the second period with another curling effort, this time from outside the box, but Sibanda produced a fine fingertip save with his left-hand to divert the shot past the post.  He then continued his man of the match performance by blocking a shot by Salah from close-range.

It meant that Egypt had to settle for the 1 – 0 win but, ultimately, it proved to be enough.

Looking forward to the second phase of the competition, Egypt look to be in good shape. They are solid at the back, and, whilst Salah is showing some signs of fatigue after a long season in Europe, he still offers a threat in and around goal, as can be seen from his performance against DR Congo. Meanwhile, Trézeguet has offer drive and determination in both matches so far.

The one area where the side may consider a change is in attack. Morwen Mahsen has offered little in the two matches to date, and his replacement, Ahmed Hassan Kouka, has looked to offer more of a goal threat when introduced to the field.

Off-the-field Egypt’s victory against DR Congo overshadowed the negative headlines generated earlier in the day by the news that attacking midfielder Amr Wada had been excluded from the team and sent home for disciplinary reasons.

The 25-year old, who plays his club football for PAK in Greece, was found to have conducted social media conversations with numerous women after his country’s first group game with Zimbabwe last Friday, a match during which he appeared as a second-half substitute.

The Egyptian Football Federation later said that Amr had been excluded to maintain “discipline, commitment, and concentration”

His ejection came after a British-Egyptian model, Merhan Keller, shared screenshots that she claimed Wadr had sent her via WhatsApp and Instagram, which allegedly contained lewd and aggressive communications. Keller then escalated the matter by sharing videos and screenshots from other women who claim to have been similarly harassed by the player, who is reported to have turned unpleasant in some cases when his advances were rejected.

This is not the first time these types of allegations have been levelled at the player. In 2017 a loan spell with Portuguese side Feirense had to be terminated early after it was claimed in the local media that Wadr had made unwanted approaches to the wives of two of his team mates, although the Egyptian strongly refuted the accusations.

The upshot of the matter, however, is that Egypt must continue for the rest of the tournament with a 22-man squad rather than their full complement, as there is no provision in the rules of the competition to replace a place expelled in such a fashion.