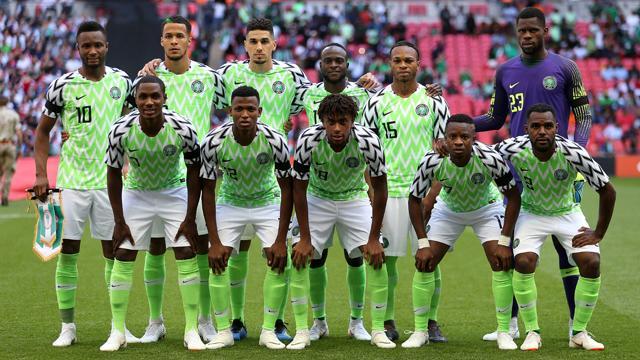 The 2019 African Cup of Nations (AFCON) gets underway in Egypt on the 21st June with a match between the hosts, and Zimbabwe. The competition features, for the first time, 24 teams who have been organised into 6 groups of four. The top two in each group plus the best four third placed teams will then progress to the knock-out rounds, culminating in the final scheduled to be played in the Cairo International Stadium on July 19th.

But what teams can be expected to feature in the semi-finals? Here are four countries that may be in the running.

Nigeria have won the Cup three times, most recently in 2013, arguably a poor return given the size of the country and the football talent that it produces. Perhaps this year is time for them to add a fourth title to that list. Arguably they have the advantage of possessing the best goalkeeper in the tournament, in the shape of Denis Masinde Onyango, who plays his club football with the South African side Mamelodi Sundowners. The 34 year old keeper was named the best in his position at the CAF awards for 2018, and is the captain of the national side.

The team also is likely to have a strong Premier League presence, with the likes of Leon Balogun of Brighton, Wilfred Ndidi of Leicester City, and Alex Iwobi of Arsenal likely to feature heavily in the tournament.  Their issue may be scoring goals – they lack a potent striker, and will be hoping that Kelechi Iheanacho, who had an in and out season with Leicester, can find his shooting boots during the tournament.

Egypt are the bookmakers’ favourite to win the tournament, for understandable reasons. The most successful side in the history of the tournament – they have won it on seven previous occasions, including an unprecedented treble between 2006 and 2010 – and were runners-up the last time that the tournament was held in Gabon. Significantly, perhaps, this will be the fifth time that Egypt have hosted the event, and, in all but one of those previous tournaments, they ended up winning it.

As ever, the star of Egyptian football is Liverpool star Mo Salah, who is revered not only in the country, but across North Africa and the whole of the Middle East.  Salah has scored 39 goals in 62 appearances for his country, and will be very much tasked with leading the line for his side this summer.

There were high hopes that Salah could make a major impression for Egypt at last summer’s World Cup after the stunning season that he enjoyed at Anfield. But the injury he picked up in the Champions League final against Real Madrid, meant he arrived in Russia only half-fit, and his side failed to get out of the Group stage. However, buoyed by his success with Liverpool this season and his winner’s medal from the Champions League final, he will be hoping to make amends this summer.

In terms of the rest of the tem, the majority of the squad is drawn from local teams, such as Zamalek, Al Ahly, Ismaily and Pyramids. However, there are still other names in the side who will be familiar to supporters of European clubs. For example, the current captain of the side Ahmed Elmohady, has just enjoyed promotion back to the Premier League with Aston Villa, whilst West Bromwich Albion’s Ahmed Hegazi will provide organisation and solidity to their back line.

In front of them, Mohamed Elneny of Arsenal will be deployed in central midfield, with licence to get forward when he can. It was he who put the Pharaohs ahead in the final against Cameroon two years ago, and is the current vice-captain.

Although not one of the top favourites to win the trophy, Moroccan fans will have cause for optimism that their team can go deep into the event.

One reason for their optimism is that the team is now managed by Hervé Renard, the best paid national team coach on the continent. Renard had a modest playing career, but beginning his coaching career in the lower tiers of French football, he found his way to Africa and Zambia, eventually managing them to their first ever African Cup of Nations in 2012.

A spell back in France was followed by appointment to the head coach job with the Ivory Coast, and they went on to win AFCON 2015, making Renard the only man to win two African Cup of Nations managing two different national teams. Now he is trying to make it three.

In terms of playing resources the current captain is Mehdi Benatia, who is currently playing his club football in Qatar, but has spent successful spells with Bayern Munich, and Juventus, and was named best Arab Player of the Year in 2014.

Meanwhile, winger Hakim Ziyech will be familiar to anybody who followed Ajax’s progress to the semi-finals of the Champions League. Known for his dribbling, speed and finishing, Ziyech has scored 12 times for his country in 23 appearances.

Another player familiar to followers of the Premier League is Wolves midfielder Romain Saíss who was part of the side that came up from the Championship last year, and helped his side to a seventh place finish, and qualification for next season’s Europa League.

Amazingly, Senegal have never won the African Cup of Nations, despite producing players like Demba Ba, El Hadji Diouf and Amdy Faye. This could be the year that all changes. They have one of the most potent forward lines of any side in the tournament, led by their captain Sadio Mané of Liverpool, and supported by players like Keita Baldé of Inter Milan, M’Baye Niang of Rennes, and his team mate Ismaila Sarr, who could become one of the break-out stars of this year’s tournament.

And at the back they have Napoli’s Kalidou Koulibaly, one of the finest central defenders in the world, to provide defensive rigour and organisation, as well as providing a major threat from set pieces.