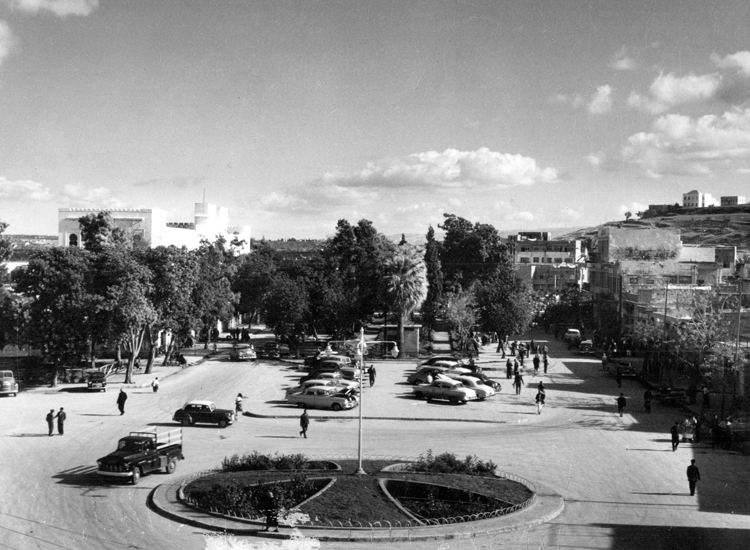 At a time when the French had just exited the country, local production of goods and services flourished, with fresh, homegrown ideas and concepts ushering in an era of cultural enlightenment. Damascene women were at the forefront of that evolution, with the plot of Souq Al Harir cleverly centered on a polygamous marriage between a man and four women, two of which are pregnant and due to give birth on the exact same day, but only one of them makes it alive out of the delivery room.

Directed by Al Malla brothers, Bassam and Mo’men, the exciting new drama thriller explores how these changes weave their way into the very daily lives of Damascenes. With the historical streets and alleys of old Damascus as a captivating backdrop, Souq Al Harir is set to follow in the footsteps of other Syrian drama masterpieces that have turned Damascus into a regional powerhouse in drama production.

But as we delve into the meticulously-crafted world of Souq Al Harir, scenes capturing the charm of 1950s Damascus prove to be intoxicating enough for us to go hunting for more. So without further ado, here are five stunning photos of 1950s Damascus:

One of the biggest squares in Damascus, which is now bustling with life and numerous residential buildings, Sahet Al Ummaiwyeen was once a calm and serene oasis of greenery and peace in the 1950s. Showcasing the city’s eternal beauty, this picture truly captures the charming spot in a bygone time. Will Souq Al Harir revive that image of the square? Ramadan is less than a month away? We’ll soon find out!

Just outside the old city walls lies Merdje Square as a centerpiece of sorts in the very heart of Damascus. Built by the Ottomans in the late 19th century, the square saw the execution of many national figures at the hands of the French, resulting in nicknaming it the Martyrs Square. Souq Al Harir is set in a time when Syria had gained its full independence, and the square’s function as an arena for public hanging has since ceased to exist.

One of the oldest and largest mosques in the world, the Ummayad Mosque has been an integral part of the city’s identity and culture for over a thousand years, and the 1950s were no different. Befitting Damascus's role as the capital of the Islamic Caliphate, the mosque saw multiple expansions that have made it a significant place of worship for Muslims across the world. The 1950s were a period where the mosque was, like today, quite frequented by Syrians looking to get blessings, learn Islam, or simply just relax for a bit amidst long and hectic days. Though 1950s Damascus had grown and expanded exponentially, the mosque remained an important cultural and religious destination, a fact which is bound to be showcased in Souq Al Harir, the mosalsal that tells and documents the story of Damascus as vividly as the stories of its characters.

It’s not only buildings and monuments there to be nostalgic for in Damascus, but also the fact that the city was a regional trailblazer when it comes to its local arts and culture scene – at the forefront of which is fashion. Bringing us a real and raw portrayal of the city back in the 1950s, Souq Al Harir is set to focus the lens on cultural practices, fashion trends and artistic innovations that took place in the city at the time. This photo of Damascene women dripping in stunning vintage fashion is merely a little preview of that.

One of the most reputable universities throughout the Arab world, Damascus University has been a beacon of high-quality education in the region ever since its inception at the beginning of the 20th century. In the 1950s, after the Syrian independence, the university became the birthplace of many political, social and artistic movements that express and reflect the evolving local identity and culture at the time. As Souq Al Harir strives to present an accurate portrayal of Syrian society in the 1950s, we can easily expect to witness the impact the university’s teachings had on society at the time, represented in the characters of Souq Al Harir.

With war becoming a synonym for Damascus throughout the 2010s, it’s easy to forget a simpler time when the city was more at peace and forward looking that it is today. As Souq Al Harir takes us back to such times, this birdeye view of Damascus gives us an insight into how big, modern and, most importantly, peaceful Damascus was once upon a time. Ready to forgo reality for a bit of mystery and healthy nostalgia? Tune in this Ramadan!

The largest and most central market in Damascus, Al-Hamidiya Souq acts as a source of inspiration for the filmmakers behind the anticipated Souq Al Harir mosalsal this Ramadan. Like many of the city’s iconic landmarks, the market dates back to the Ottoman era. Stretching for 600 meters in the heart of Damascus, the market is full of souvenirs, consumer goods, and most of all, stories that have shaped the Damascene culture for decades.

Tune in to Sling this Ramadan to watch Souq Al Harir and get a glimpse of how it was really like to live in Damascus in the 1950s. Get 7 Days Free Here.