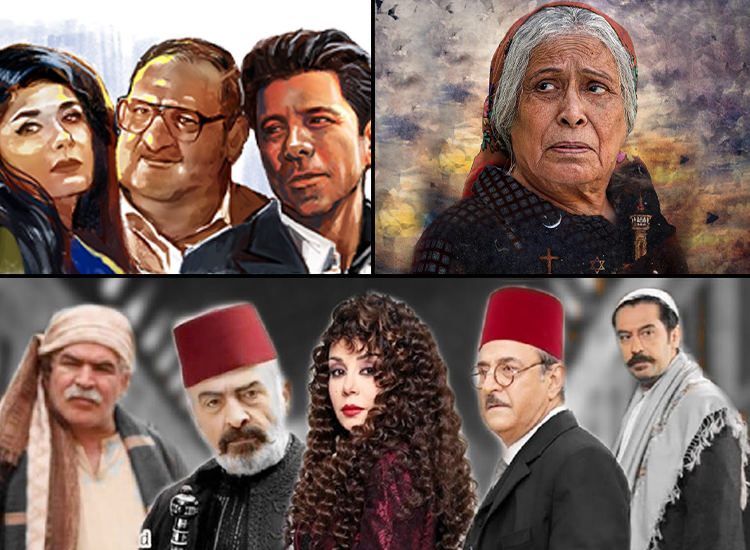 Spanish poet, George Santayana once said, “those who do not learn from history, are doomed to repeat it.” In a bid to avoid repeating the same mistakes, and purely for educational purposes, of course, this Ramadan, we’re excited to dive into all the period dramas the holy month has to offer, where viewers are transported back to a time when the Middle East was not what it is today: to the Egypt of Um Kulthum and Abdel Halim Hafez, to a stable and conflict-free Syria; and to the Gulf before it became the international hub we know it as today. For many regions in the Middle East, the 50s and 60s were a time where countries were being liberated and embarking on journeys shaped by new ideologies and cultural liberalism. As for the Gulf region, the 40s witnessed the very beginnings of its voyage in becoming the melting pot and technologically-advanced region it is today.

With a slew of shows that can make or break family bonds depending on which character we’re rooting for in the drama, we’re religiously (pun intended) keeping up with - this year’s roster of entertainment includes a few interesting period dramas to keep us captivated throughout the holy month.

Picture Syria in the 50s, after having gained independence from the French, and in the midst of experiencing economic growth and a film industry that was on the brink of taking off.

Picture the elegant streets, the progressive fashion scene and the ideological liberalism.  Souq Hareer is a period drama set in Syria in the mid-50s after the French rule had ended, and during a time when local products and ideals were being promoted. It comes at a time when Syria had been witnessing reform, including the granting of suffrage to Syrian women, which took place in 1953.

Woven in the crowded alleys of Syria’s popular neighborhoods are tales of love and passion, and those of conspiracy theories and secrets, as we follow the story of two brothers, Omran (Bassam Koussa) and Ghareeb (Saloom Haddad), one of whom has just returned from abroad and the other having lost his memory due to an accident.

Souq Al Hareer is comprised of a huge pool of talent both on set and on camera, with the likes of Bassem Koussa and Saloom Haddad as the leads, and brothers, Bassam and Mo’men Al Mulla as the directors.

Bassem Koussa is a Syrian actor, who is most famously known for his roles playing the villain--namely in Bab Al Harra, which was a hit 2006 drama series that gained wide popularity across the Arab region at the time of its release. The show was set in a Syria still under the French rule, at a time when the Syrians were longing for an independent state. It almost seems like fate that Koussa be cast as the lead in Souq Hareer, which is set in a Syria post-French rule. We’ve yet to find out though, whether Koussa will be playing the hero or the villain in this one.

Alongside Koussa is the Syrian actor most famously known as the “Knight of Arabic Drama”, Saloom Haddad. Haddad, who’s taken part in a deluge of historical works is no stranger to period dramas. It was, in fact, his brilliant delivery of the role of Al Zeer Salem in the series of the same name in the 2000s that granted him fame across the region. Haddad played the lead role in the period drama, which narrated the life of a poet and knight that lived during the pre-Islamic era.

Known as the golden era of Egyptian cinema, the 1940s and the 50s saw an immense surge in talent - it was a time that witnessed the rise of iconic figures, the likes of Um Kulthum and talented Egyptian writer, Naguib Mahfouz among many other icons of Egyptian culture. At the time, dubbed by some the ‘Hollywood of the Middle East’, the Egyptian film industry was considered the third largest, globally.

Fast forward to the 70s and the 80s, two decades after the first television broadcast took place in Egypt and the country was undergoing a westernization of sorts. The birthplace of many of the vintage trends gaining popularity today, the 80s were a time of shoulder pads and fanny packs, a time when flatscreens didn’t yet exist and the main medium of communication was what could now only be described as kitsch old-school telephones.

Set in a nostalgic Egypt, ‘Layalina 80’s series of events unfold between the 50s and the 80s. With the storyline following two families as they feud from the 50s all the way into the 80s - in the period of time that witnessed Anwar El Sadat’s assassination. ‘Layalina 80’, which takes its viewers back to an Egypt pre-selfies and laptops, stars Ghada Adel, Eyad Nassar, Khaled El Sawy and Sabrine.

The 1940s were packed with quite a few historical events globally: in 1941, the Japanese attacked Pearl Harbor, in 43, Lebanon gained independence, and in 45, Hitler committed suicide, World War 2 ended, and the vaccine for influenza was invented--so, a pretty good year overall. Meanwhile, back in the Gulf--the setting of the latest Ramadan show featuring Kuwaiti actress Hayat Al Fahad--Om Haroun is a doctor in the 40s, a time when medical advancements were still minimal.  Portrayed by prominent Kuwaiti actress, presenter and writer, Hayat Al Fahad, Om Haroun is a character who treats her friends and family in the small village where she lives, as she also takes on the role of their confidante.

Known in the Gulf region as “the leading lady of the silver screen,” Hayat Al Fahad, is a woman of many talents. An actress, a writer, and a published poet, she released a collection of poems called “Etab” in the 70s. Al Fahad also worked as a radio presenter for a period of time in the 70s, but her passion for acting prevailed. It was after watching a movie starring Egyptian actor Farid El Atrash that her love affair with the big screen began. While she may have initially faced obstacles due to the environment she was in, a time when women entering the realm of cinema wasn’t as commonly accepted as today, Al Fahad pushed through and got her starting point when she was cast in her first play in 1963, Al Daheya. The talented actress went on to star in several Kuwaiti hits, including Ela Omi w Abi maa el taheya, Dars Khesoosy, and Khalty Gemasha.

You can watch all these exciting new drama shows during Ramadan, by subscribing to Sling TV Arabic, sling.com/arabictv.