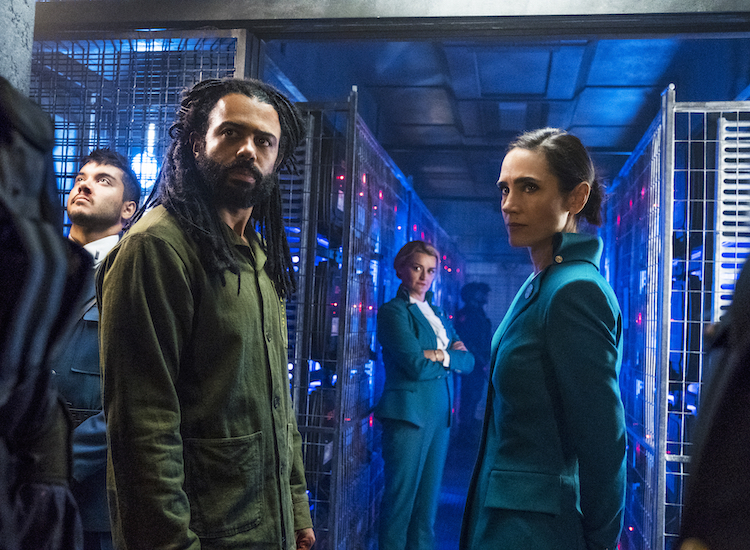 Snowpiercer is a show about a train 1,001 cars long that carries the last surviving members of humanity on a never-ending loop around a frozen, uninhabitable Earth. It should not feel pertinent or relatable.

Yet because 2020 has been nothing if not surprising, TNT’s new sci-fi show — which, just to reiterate, operates from a premise that is close to preposterous — feels extremely, almost comically relevant. Rigid class structures that keep the elite sequestered from the horrors facing the lower class? Sounds familiar. Manipulative leadership that uses misinformation and distraction as means of controling the masses? Read all about it in your local paper. Characters longing for the simple pleasures they took for granted before they were forced indoors? That’s most of us, several times a day.

So yeah, it’s difficult to watch Snowpiercer without thinking of the coronavirus crisis. But once you get past the unsettling salience of its themes, you’ll discover a show that’s actually more Agitha Christie than Phillip K. Dick.

Based on Bong Joon Ho’s 2013 film of the same name (itself adapted from a french graphic novel), Snowpiercer is squarely on the “highly allegorical” end of the sci-fi spectrum: After freezing Earth in an attempt to stop global warming, the eponymous train — built by the mysterious industrialist Mr. Wilford — sets off for a non-stop journey with the last surviving (Read: rich) members of humanity. But in the show’s opening scene, many poor, unwashed masses force their way onto the back of the train, establishing a clear, unambiguous caste system as soon as it departs.

Jumping ahead nearly seven years, the “tailies” are now slowly starving to death on a diet of gelatinous black cubes, while the biggest problem facing first-class passengers is being body-shamed by Scanadavian royals. Like its predecessor — and most Bong Joon Ho films, including his recent Best Picture-winning Parasite — Snowpiercer is not subtle in its central metaphor about class disparities and resentments.

Check out our exclusive interview with 'Snowpiercer' star Daveed Diggs

However, in a somewhat surprising departure from the original, a muder mystery is the engine that powers the plot. After a passenger is brutally killed, former homicide detective turned tailie insurrection leader Andre Leyton (Daveed Diggs) is summoned to the train’s front by the head of hospitality Melanie Cavill (Jennifer Connelly). The nuts-and-bolts of his investigation creates the structure for early episodes, allowing the viewer to explore the train along with Leyton, and pushing well beyond the original film’s simple survive-and-advance plotting.

As the story progresses, the show begins to explore the culture and lifestyle of the upper-class in a way the film couldn’t. The bizarre indulgences of the first-class passengers — like bringing a bearded dragon to the breakfast table — don’t just add to the show’s surreal aesthetics, it feels like a comment on our tolerance for the eccentricities of the wealthy. The best parts of Snowpiercer explore the notion that status, wealth, and power can be the source of depravity, rather than its cure.

With everyone pursuing their own secret agenda, the power dynamics between the characters sets up a story that’s loaded with surprises and twists, making it plenty entertaining. Still, even though the violence has been dialed back compared to the utterly brutal film, Snowpiercer is still a show in which cannibalism, mutilation, and torture are signficant plot points. In this respect, it’s more The Walking Dead than Battlestar Galactica. If you’re a fan of the former, or high-stakes cable dramas in general, Snowpiercer is pulling into the station at exactly the right time. Just be warned: watching in quarantine, the train’s torture devices aren’t the only thing that cuts to the bone.

Snowpiercer preimeres Sunday, May 17 at 9pm ET on TNT