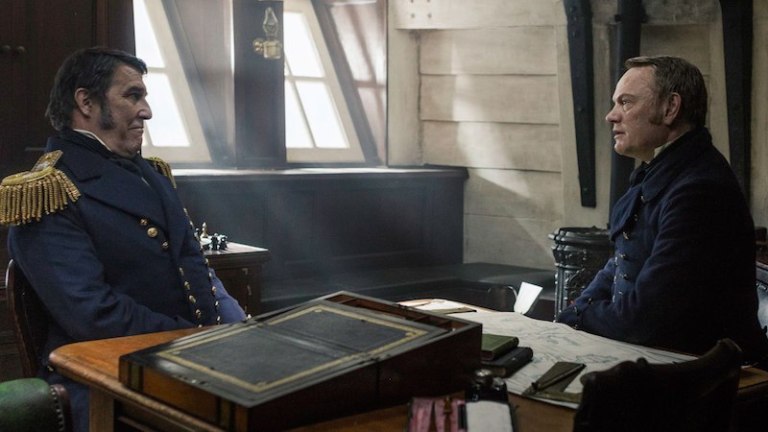 It has been a tough couple of years for AMC. Its flagship series, The Walking Dead, despite still being the highest-rated show on television, has been steadily leaking viewers and the effort to find another hit, whether it be another monster show or a prestige drama, like Mad Men or Breaking Bad, has been fruitless.

With The Terror, which premiered a couple of weeks back and whose first four episodes are available now on-demand, the former American Movie Classics has done a bit of alchemy that would make Walter White proud, combining period prestige with supernatural horror and coming out with something both unique and compelling.

Set in 1845 and based on the 2007 novel by Dan Simmons, The Terror follows two English Naval ships, HMS Erebus and HMS Terror, on an exploratory mission through the Arctic, searching for the then-elusive Northwest Passage. Both the mission and the Erebus are commanded by Sir John Franklin (Ciaran Hinds, aka Mance Rayder on Game of Thrones), an exuberant, optimistic veteran whose reach, we gradually learn, tends to exceed his grasp; the Terror is led by his opposite number, Captain Francis Crozier (Jared Harris, aka Lane Pryce on Mad Men), who is more careful, more pragmatic, more forward-thinking.

In the first couple of episodes, the conflict between the two men feels real and lived-in, in part because there’s clearly a history between them that will only be revealed in dribs and drabs, and in part because neither of them comes off as a villain; their choices are well-reasoned and true to each man’s entirely respectable goals and love for their respective crews.

This sets the tone for what’s to come, which is a careful character study both of the ships’ decorated, epauleted officers and its lowly seamen under impossible circumstances: the ships are soon frozen in place, forcing both crews to wait until the next thaw, which may or may not arrive in the spring. And then the attacks — brutal, violent, gory attacks from some as-yet unknown beast — begin.

That’s in addition to the challenges of simply existing in the Arctic in 1845 — a place where “technology still bends the knee to luck” — like giant hail, creeping ice pack with the potential to crush the ships, consumption, scurvy, bears, spoiled food stores, and the local Inuits — with no means whatsoever of communicating with anyone farther than the sound of your own voice can reach, and thanks to the brutally inhospitable climate, acute cabin fever.

What I most appreciated about the first four episodes is how patiently The Terror unfolds its story. It’s clear that, the longer these men are trapped, the less their rank and station will matter, so though development of the “smaller” characters takes a backseat in the first episodes to the bigger Franklin/Crozier conflict, just enough track is laid to make it clear that each of these characters has been carefully drawn to be more than a gang of redshirts waiting their turn to die. Likewise, it’s not at all clear that anything supernatural is happening until the third episode and, after the fourth, the exact nature of the threat is still a mystery — a mystery that I am very interested in seeing through.

Sling will only have the first two episodes, which premiered back-to-back as a double, through April 16, so if you’re at all interested, make sure to check it out this weekend.